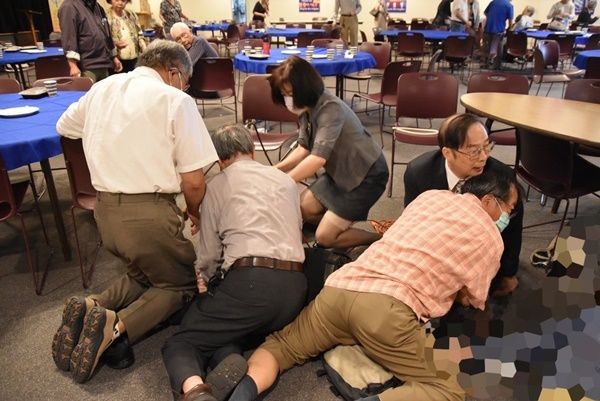 The deceased is John Cheng, a 52-year-old Taiwanese physician, while the injured range from 66 to 92 years of age. Witnesses at the scene said that although most of the congregation that day were grandparents in their 70s and 80s, they still managed to subdue the gunman.

The assailant, David Wenwei Chou (周文偉), 68, is facing one count of premeditated murder and five counts of attempted murder. He is expected to be arraigned on May 17, and bail has been set at US$1 million.

California Deputy Attorney General and Yorba Linda City Councilor Peggy Huang (黃瑞雅), who is Taiwanese-American, said that she had grown up in the Geneva Presbyterian Church. Although she was not in the church that day, she shared with NBC4 what witnesses had told her.

When Chou walked into the church that day, he was seen carrying a newspaper and "acting strange," Huang said. "No one in the small, tight-knit church knew him."

Witnesses reported seeing Chou chain and nail the exit doors shut, and moments later he began to fire on parishioners. John Cheng, 52, a doctor who specialized in sports medicine, quickly charged Chou from across the room and tackled him.

The assailant fired on Cheng, and as he attempted to unjam his weapon the congregation's former pastor, Billy Chang, hurled a chair at his head. According to witnesses who spoke to Huang, this knocked the firearm out of Chou's hand.

This provided an opening for parishioners to rush forward, pin him to the ground, and tie his legs with an electrical extension cord. Officials pointed out that the bravery of these church members prevented more casualties.

"It's just amazing," Huang told the news station. She pointed out that in Taiwan, grandparents are called "agong" and "ama," the Taiwanese Hokkien terms for "grandpa" and "grandma."

Huang said that these "agongs" and "amas" who were in their 70s and 80s "are just amazing, amazing people, to have that clear sense of mind to take this guy down."

Cheng, who was shot three times, succumbed to his wounds at the scene of the shooting, leaving behind a wife and two children. Five other people also suffered wounds, including four men aged 66, 75, 82, and 92 and a 86-year-old woman.