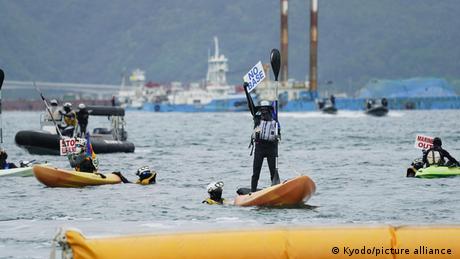 Japanese Prime Minister Fumio Kishida vowed to take steps to reduce the US military presence in Okinawa, the nation's most southerly prefecture, on Sunday. He made the comments at a ceremony to mark the 50th anniversary of the reversion of Okinawa from US control.

Residents of the poorest prefecture in Japan, however, were skeptical. Many say they have heard similar promises from a succession of political leaders, but have seen no changes.

Okinawans who oppose the presence of the US military bases, which were built following World War II, say they create a major source of pollution and noise. Many also blame US military personnel for violent crimes that have had an impact on residents, and say the culture, history and language of the indigenous Ryukyuan people are disappearing. The US justifies its presence in Okinawa as the island offers a strategic stronghold in the Pacific.

Many Okinawans are now calling for independence for the semitropical archipelago, which was a kingdom in its own right until it was incorporated into Japan in 1872.

Promises for a 'strong Okinawan economy'

In his address at the Okinawa Convention Center, in the city of Ginowan, Kishida referred to Okinawa as the "gateway to Asia" and said the Ryukyu islands had the potential to become a regional hub for international exchanges. He added that his government would also work hard to create a "strong Okinawan economy."

He conceded, however, that the bases, which were first set up when the US military invaded Okinawa in the closing stages of World War II in 1945, weigh heavily on the local community. He pledged to "steadily make visible progress on the alleviation of the burden while maintaining the deterrence offered by the Japan-US [security] alliance."

Okinawa was returned to Japan's control on May 15, 1972, 27 years after the US invasion. However, the military presence remains overwhelming. Though Okinawa accounts for just 0.6% of the total land area of Japan, it is home to more than 70% of the US military facilities in the country. And locals' resentment does not sit far below the surface.

'No need for any military here'

Asked about the anniversary of the return of Okinawa to Japanese control, Byron Fija told DW: "How can I be happy? Today I am sad and I am angry because this is my country, but, for 270 years, when the first invaders came from the Satsuma Domain, the people here have been exploited for our treasures."

Fija, 52, never knew his American father and was adopted by his mother's older brother. Today he is an academic at Okinawa University and said the ongoing construction of a new US military base on reclaimed land in a pristine bay near the village of Henoko was just the latest slight against the people of Okinawa.

"Henoko is a small village, and there has been a lot of opposition to the base plan there, but the government does not listen to what the people say," he said.

"We could trade with anyone — the US, China, Japan — and there would be no need for any military here at all," he said. But he is not sure whether enough Okinawans are sufficiently unhappy with the situation to form a coherent movement that would fight for independence.

Shinako Oyakawa — a member of the Association of Comprehensive Studies for Independence of the Lew Chewans, or Ryukyuans, which aims to win the islands' independence — is more optimistic.

"Fifty years ago, most Okinawan people believed the return of the islands to Japanese control was a solution to their dreams because it would mean the bases would go, and our human rights would be returned and respected," she told DW. "But that didn't happen, and it's the same even today. ... The people of this prefecture are treated as second-class citizens of Japan."

Despite pleas by successive governments in Okinawa, for some of the US bases to be moved to mainland Japan in order for the burden to be shared more equally with the rest of the nation, nothing has happened, Oyakawa said. It is the perfect example of communities and politicians in the rest of the country saying "not in my backyard,” she added.

In the run-up to Sunday's anniversary events, opinion polls conducted in Okinawa by the Ryukyu Shimpo newspaper and in mainland Japan by the Mainichi Shimbun revealed that 69% of Okinawans believe that the concentration of US troops in the prefecture is "unfair." Among mainland Japanese, the figure was just 33%.

Despair at the failure to have the US military removed has encouraged a movement for independence, Oyakawa said, and the association is in talks with similar campaigns in Catalonia, Scotland, Guam and Hawaii.

"For a long time, the people of Okinawa were disappointed by the government in Tokyo, but they were defeatists who did not think they could change anything," she said. "That made a campaign for independence difficult. But that is changing and I think it is natural for people to want to be free when they have been colonized for such a long time."