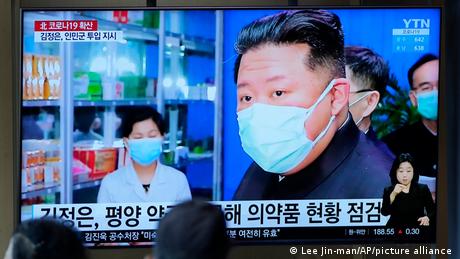 Late last week, Pyongyang for the first time acknowledged that the country had faced any COVID cases at all, before state media began to rapidly report about it spreading "explosively" across the reclusive country.

Health authorities said on Monday that eight more people had died, and an additional 392,920 were newly found to have feverish symptoms. That brings the official death toll to 50 and illnesses to more than 1.2 million.

Kim ordered the deployment of the "powerful forces" of the army's medical corps to "stabilize the supply of medicines in Pyongyang City," North Korea's capital, state news agency KCNA reported on Monday.

Kim also reportedly criticized health officials over what he called a botched pandemic response, saying medicine supplies weren't being distributed to pharmacies in time because of their "irresponsible work attitude" and lack of organization.

Since the worldwide outbreak of the coronavirus pandemic North Korea has maintained a "zero covid" policy including stringent quarantine measures and border closures. It only reported its first official coronavirus case last Thursday.

The country doesn't have a national vaccination campaign and COVID treatment; state media have encouraged patients to use painkillers, antibiotics and unverified home remedies.

The World Health Organization (WHO) warned on Monday the virus may spread rapidly inside the reclusive state but it had yet to receive information about the outbreak directly from local authorities.

WHO members are obliged to report a public health emergency within 24 hours once a COVID outbreak arises, though there were no penalties for non-compliance.

"With the country yet to initiate COVID-19 vaccination, there is risk that the virus may spread rapidly among the masses unless curtailed with immediate and appropriate measures," Poonam Khetrapal Singh, WHO's regional director for South-East Asia, said in a statement.

South Korea said it was ready to provide COVID-19 vaccines and other medical support, but that the North had not acknowledged its offer.

"If North Korea responds, I would not hold back any necessary support for medicines including COVID vaccines, medical equipment and health personnel," South Korean President Yoon Suk-yeol said.