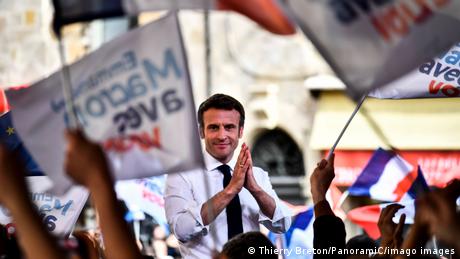 The French recently reelected Emmanuel Macron as their president, handing him a comfortable majority with 58.5% of the vote. But just a few weeks after the election, many citizens are hesitant to entrust the president with all the power in the state.

A recently published survey by the polling institute ifop shows thata newly forged broad alliance of the French left would currently win the first round of the parliamentary elections in June with 28% of the vote. "Renaissance," Macron's newly named centrist party, and Marine Le Pen's far-right National Rally (RN) would come in second and third place.

It's mainly the French left that is hoping it will create the biggest group in parliament, aiming for a so-called "cohabitation" — a rare political occurrence in France when the president and the dominant group in parliament belong to different parties. In this circumstance, the president is forced to name a representative of the dominant parliamentary group as his prime minister and govern in coalition with them.

Without a parliamentary and government majority, the president would then be forced to bury his reform agenda. Macron's plans for an overhaul of France's pension system with a gradual increase in the retirement age to 65 from a current 62 would be off the table, for example.

"Macron would then once again assume the symbolic function of president and try to exert as much influence as possible on certain processes," Emmanuel Droit, a professor for contemporary history at Sciences Po University in Strasbourg, told DW. "In this constellation, however, his power would be very limited."

But even a clear majority for the opposition in the first round would not guarantee a change of government, because elections in the 577 constituencies are held according to the majority voting system. If no candidate achieves an absolute majority in the first round, there is a second round of the best-placed candidates. That makes predictions difficult.

Currently, both the National Rally and the left-wing populists of La France Insoumise (LFI) or the France Unbowed Party around the 70-year-old political veteran Jean-Luc Melenchon are trying to capitalize on the widespread anger against Macron and turn the parliamentary elections in four weeks into a "third round."

Both Le Pen and Melenchon finished second and third respectively in the recently concluded two-round presidential election in April, leaving behind the rest of the candidates by a huge margin. France's traditional center-right and center-left parties, the Republicans and the Socialist Party, performed catastrophically, even falling short of a 5% hurdle.

However, only the left-wing populist Melenchon stands a chance of becoming prime minister. Although Le Pen was able to garner more than 13 million votes in the presidential runoff and win in 30 regions, her party's election prospects in June look bleak, partly due to a lack of suitable candidates.

This week, the RN's interim party leader, Jordan Bardella, presented modest goals, saying that an entry into the National Assembly with a parliamentary party strength of at least 15 deputies would be a success. Currently, the party only has only five seats in parliament besides that of Le Pen.

Melenchon, on the other hand, has achieved a political coup. An anti-NATO euroskeptic and a strong critic of Germany, Melenchon has crafted a new broad electoral alliance called the New Popular Environmental and Social Union (NUPES) with France's Socialist Party, the Communists and the Greens. It's a project that was considered utopian just a few weeks ago.

The new alliance is fielding a single candidate in each of the 577 constituencies so that the individual parties don't corner each other's votes.

Melenchon himself never tires of touting himself as a future prime minister, promising radical change in domestic and foreign policy. He's not in favor of constructive cooperation between France and the EU. And France's traditionally close relationship with Berlin would also suffer under him, as Melenchon considers the Franco-German engine to be completely outdated.

Emmanuel Droit says there's currently a political dynamic in favor of Melenchon that will mobilize large numbers of left-wing voters. It's a novelty in the history of modern France because until now many supporters of defeated candidates in the presidential elections have tended to stay away from polls when the parliament is elected a few weeks later. That voter pattern in the past also ensured that the president had the majority he needed in the National Assembly, the lower house of parliament, to govern.

Despite the seeming surge in support for the French left, pollsters do not currently predict a parliamentary majority for it. Melenchon, who is not seeking another mandate and is merely "making himself available" as prime minister, could win between 135 and 165 seats. That's according to an analysis this week by OpinionWay, a polling firm.

"Ensemble," the alliance around Macron's party, on the other hand, would defend its parliamentary majority with 310 to 350 seats despite widespread criticism of the president and his market-friendly policies. At least that's the prediction four weeks before the election.

Emmanuel Droit also currently expects Macron to win a majority in parliament for his unprecedented second and last term in office in accordance with the constitution. The majority voting system would mean that moderate politics would prevail in the end.

"A Prime Minister Jean-Luc Melenchon would mean that the French could retire at the age of 60. But people know that this is not feasible. There are also reservations about his foreign policy program with its massive criticism of the EU and his proximity to autocratic states," he said.

In day-to-day politics, the parliament would probably not play a corrective role in reining in power in the next five years with a broad Macron majority — despite huge resistance to the president's policies among the population.

"We have a crisis of representative democracy in France," Emmanuel Droit said.

"The parties and unions are no longer fulfilling their role as political mediators. And that's why many politicians — not only from the ranks of the RN and LFI, but also in the president's camp — are calling for electoral reform. Proportional representation would be the key to this," he said.

'The streets are the only solution to voice protest'

Macron had already promised a "dose of proportional representation" after his first election five years ago and repeated the proposal in the current election campaign.

The president is under huge pressure on the issue, but a quick decision is unlikely. On the other hand, it's foreseeable that the political opposition will once again take shape on the streets during Macron's second term in office. Much like the Yellow Vest movement — a protest movement against a fuel tax hike that morphed into an all-out revolt against Macron's government three and a half years ago.

"Unfortunately, this is what we fear could happen in the fall," Emmanuel Droit said. "For many French people, the streets are the last and only solution to voice their protest. People in France see the streets as a place for democracy from the bottom up."