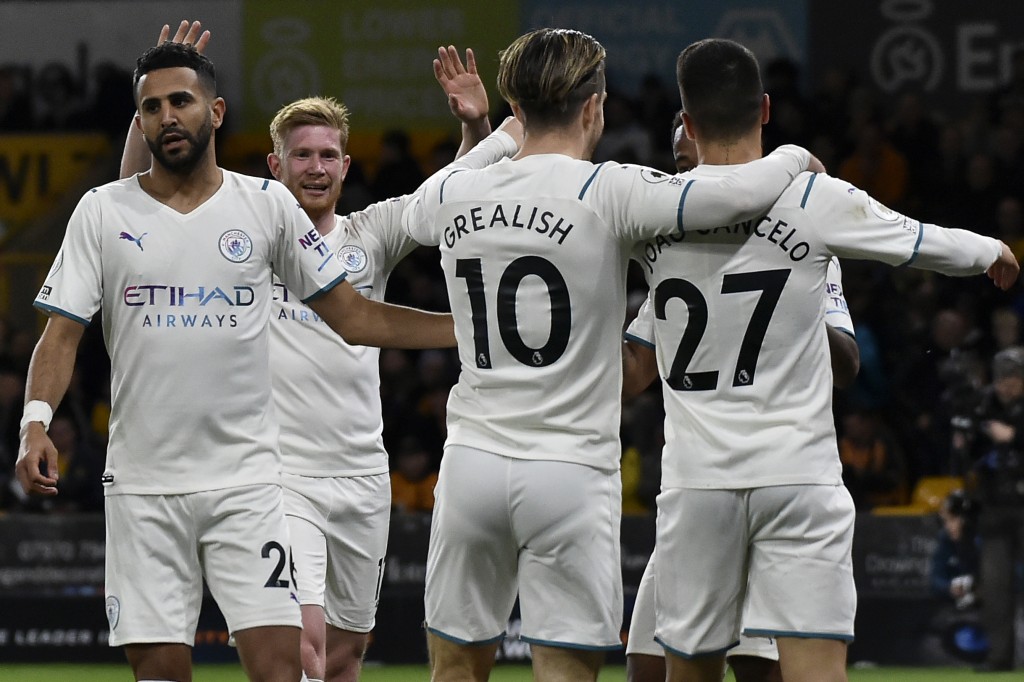 Manchester City can take a big step toward retaining its Premier League title by overcoming its shortage of fit defenders to win at West Ham and take a six-point lead in its penultimate match. Second-placed Liverpool will still have two games remaining but with an inferior goal difference. In the pursuit of Europa League qualification, Manchester United can be dislodged from sixth place on goal difference if West Ham beats City. Chelsea, which lost to Liverpool in the FA Cup final on Saturday, is in third place. The fourth and final Champions League place is still up for grabs. Tottenham, which beat Arsenal on Thursday to go a point behind its north London rival, can move into fourth place by beating Burnley. Arsenal does not play its penultimate match until Monday against Newcastle. In the struggle to stay in the Premier League, Leeds hosts Brighton sitting in the relegation zone on goal difference. Burnley is a place higher with a superior goal difference and a game in hand. Everton is two points better off going into its home match against Brentford. Wembley Stadium will see the second final of the weekend when Chelsea looks to follow up winning the Women's Super League by defending the Women's FA Cup against Manchester City.

AC Milan can seal its first Serie A title in 11 years. The Rossoneri hold a two-point lead ahead of city rival Inter Milan with two matches remaining and they also hold the tiebreaker advantage courtesy of a better head-to-head record. Milan hosts an Atalanta side looking to secure a spot in Europe shortly before Inter visits relegation-threatened Cagliari. Also, Fiorentina visits Sampdoria fighting for a spot in Europe, Napoli hosts Genoa, and Bologna plays regional rival Sassuolo.

Sevilla needs one point when it visits Atlético Madrid to tie up the last Champions League berth with a fourth-place finish. Sevilla holds the tiebreaker with fifth-placed Real Betis, which trails it by five points with two games left. Five stragglers — Getafe, Granada, Cádiz, Mallorca and Alavés — are all fighting to avoid relegation. Levante is already destined for the second division and two more sides with join it. Mallorca and Alavés are in the drop zone. Nine of the 10 games for this second-to-last round will all be played at the same time.

The final round of the second division has one burning issue to be decided: Who will join already promoted Schalke in the Bundesliga next season? Werder Bremen, Hamburger SV and Darmstadt are the three candidates with a realistic chance. St. Pauli has a mathematical chance but its goal difference makes it virtually impossible. Bremen is three points ahead of its rivals and needs only a point against Jahn Regensburg to be sure of a return to the top-flight. A defeat would also be enough if Hamburg and Darmstadt lose against Hansa Rostock and Paderborn, respectively. Hamburg and Darmstadt, which are level on points, will be hoping for a favor from Regensburg. Schalke is two points ahead of Bremen with a better goal difference and a point against Nuremberg could be enough to win the division.