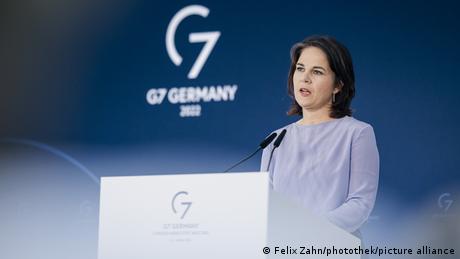 Group of Seven (G7) foreign ministers on Saturday called on Russia to end its naval blockade of Ukrainian grain exports to avert a major humanitarian crisis.

"Russia's war of aggression has generated one of the most severe food and energy crises in recent history, which now threatens those most vulnerable across the globe," they said in a statement after talks in the northern German resort of Weissenhaus.

German Foreign Minister Annalena Baerbock, who hosted the meeting, said the G7 leaders were looking at ways to get vital commodities out of Ukrainian storage.

"People will be dying in Africa and the Middle East, and we are faced with an urgent question: How can people be fed around the world? People are asking themselves what will happen if we don't have the grain we need that we used to get from Russia and Ukraine," Baerbock said at the close of the meeting.

She and her counterparts vowed to "support Ukraine in keeping up its agricultural production, storage, transport and processing — as well as support Ukraine and its regional partners in restarting exports."

The G7 pledged to provide further humanitarian aid to the most vulnerable.

G7 to continue weapons supplies 'as long as necessary'

The group reiterated its stance that the territories seized by Russian forces need to be returned to Ukraine.

"We will never recognize border changes that Russia wants to force through military force," Baerbock said.

The diplomats vowed to supply Ukraine with weapons for years to come if need be.

"We will pursue our ongoing military and defense assistance to Ukraine as long as necessary," they said.

The ministers also called on China not to "assist Russia in its war of aggression,'' including undermining international sanctions or justifying Moscow's actions.