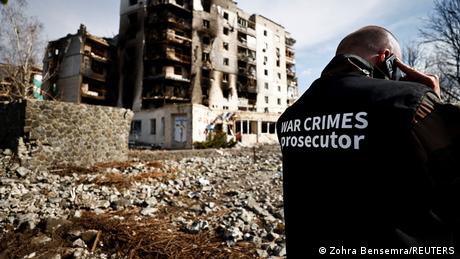 This article was last updated at 01:40 UTC/GMT

Ukrainian Interior Ministry advisor Viktor Andrusiv said on Ukrainian television that Russia's invasion is entering its "third phase" which shows that Moscow is planning for a "long war."

The first phase consisted of trying to take Ukraine "in a few days," according to Andrusiv. The second phase saw the Russian military attempt to encircle Ukrainian forces in the east of the country.

In the third phase of the invasion, Moscow is preparing a defense of territories in the east and south of the country that are under its control.

"This shows that they're going to turn this war into a long war," Andrusiv said.

Andrusiv argued that the Kremlin intends to use a drawn-out war to bring Western countries to the negotiating table, who would then push Kyiv to give concessions.

"We have 41 suspects in cases with which we will be ready to go to court. All of them concern Article 438 of the [Ukrainian] criminal code on war crimes, but different types of war crimes. There is the bombing of civilian infrastructure, the killing of civilians, rape and looting,'' Venediktova said on Ukrainian television.

The first war crime trial since the start of the invasion began on Friday in Kyiv. The suspect is a 21-year-old Russian soldier accused of killing a Ukrainian civilian in the northeastern village of Chupakhivka.

Ukraine's security service posted a video of the suspect describing how he shot the civilian. Ukraine has been criticized by rights groups for publishing footage and images of prisoners of war, which the say contravenes the Geneva Conventions.

Previously, Venediktova had said that her office was looking into more than 10,700 potential war crimes involving more than 600 suspects.

Ukraine's Zelenskyy: no-one can predict how long war will last

Ukrainian President Volodymyr Zelenskyy said in a nightly video address that "no-one today can predict how long this war will last."

"This will depend, unfortunately, not only on our people, who are already giving their maximum," Zelenskyy said. "This will depend on our partners, on European countries, on the entire free world."

Zelenskyy said he was thankful to countries who have imposed sanctions on Russia and given military and financial support to Kyiv.

"This is the only recipe for protecting freedom in the face of the Russian invasion. And for Western countries, this is not simply an expense. This is not about accounting, it's about the future," Zelenskyy said.

Summary of Friday's events in Russia's war on Ukraine

The president of the Georgian breakaway region of South Ossetia, Anatoly Bibilov, announced the territory would hold a referendum on July 17 on whether to become part of Russia.

The European Union's foreign policy chief, Josep Borrell, announced that the bloc was set to increase military aid to Ukraine with a further €500 million ($520 million).

DW correspondent in Kyiv Fanny Facsar said Ukraine's counteroffensive in the east of the country "seems to be working."