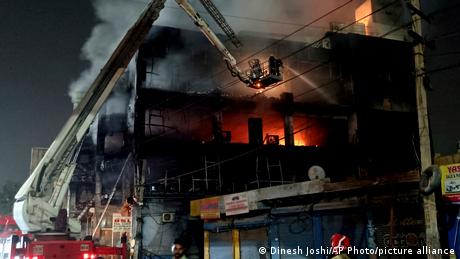 At least 27 people died, and many others were injured, after a major fire broke out on Friday evening in a four-story commercial building in New Delhi, according to emergency services.

Local media quoted police saying 60 to 70 people were rescued from the building, which is located in the Mundka neighborhood in the west of the Indian capital.

More than 40 people had sustained burns and were hospitalized, according to the broadcaster NDTV.

At least 20 fire engines managed to douse the fire after several hours. A search operation was under way for anyone trapped in the rubble, fire department officials said.

The blaze started from the first floor of the building, which houses the office of a security camera and router manufacturing company, police official Sameer Sharma told NDTV.

Details of what caused of the fire were not immediately available. The Times of India newspaper reported that the owner of the building was in custody.

Atul Garg, director of Delhi Fire Services, said the building had no clearance from the fire department and it was not equipped with fire safety equipment like extinguishers, the Associated Press reported.

India's President Ram Nath Kovind and Prime Minister Narendra Modi offered their condolences to loved ones of the fire victims via Twitter.

Fires are common in India, where building laws and safety norms can often be overlooked by builders and residents.

In 2019, a fire caused by an electrical short circuit engulfed a building in New Delhi and killed 43 people.