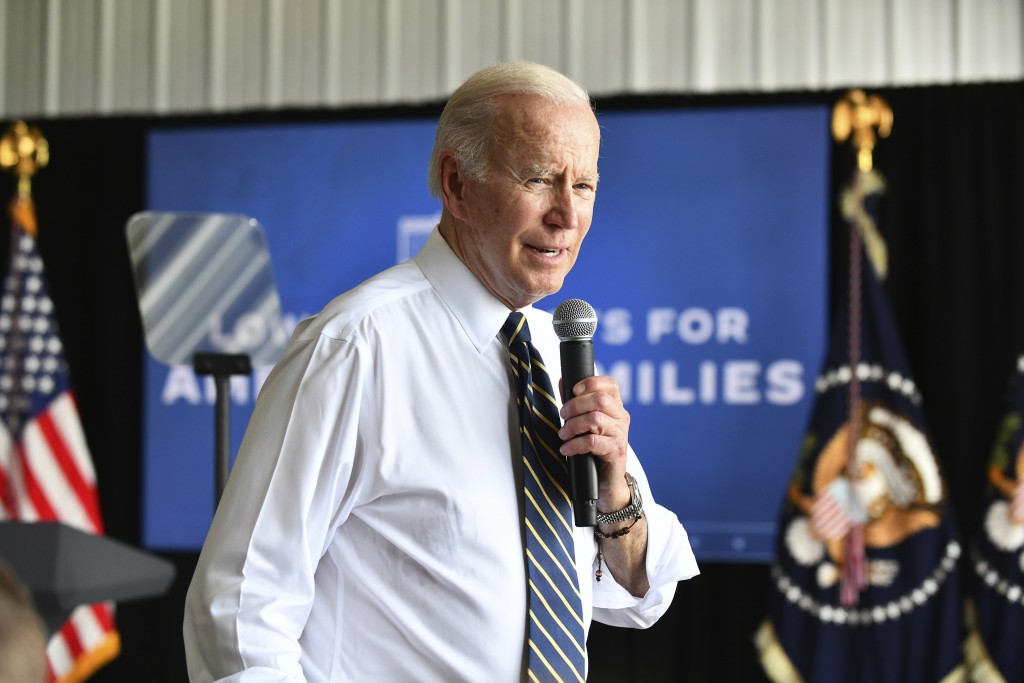 Speaking for 14 minutes near a backyard pool amid the smell of barbeque, Biden told about 140 people gathered that it's important for Democrats to “communicate what we mean.” He praised the $1 trillion bipartisan infrastructure package, noted the federal deficit and unemployment were falling while lambasting Republicans as extremists. He also predicted — perhaps fancifully given his sagging approval ratings — that Democrats might pick up a whopping four Senate seats during November's midterm elections.

But the real purpose of the president's appearance was to raise what might be more necessary than anything else to help his party get out its message: campaign cash.

Biden has raised $7.8 million for Democrats since March, according to figures the Democratic National Committee provided to The Associated Press. That includes the $2 million he picked up in Maryland along with another $1 million he pulled in two days later when he swung through a Marriott ballroom in Chicago's South Loop to address about 50 people.

The DNC released information about the amounts raised and number of attendees for each event after inquires from the AP about why such figures hadn’t been previously disclosed to pools of journalists traveling to fundraisers with the president — as prior administrations have typically done.

Other fundraisers include a Washington event that took in $3 million and featured an intimate audience of around 20. During a West Coast swing last month, Biden attended a larger gathering that included supporters from the 2020 campaign in Portland, Oregon, of about 110 people and raised $300,000-plus. Around 30 people were at a more traditional event in Seattle, where the committee raised nearly five times that, or around $1.5 million.

After largely skipping in-person events due to the coronavirus pandemic, the DNC said Biden plans to step up his fundraising schedule ahead of November, when Republicans are hoping that wins around the U.S. can put them back in control of Congress.

The DNC didn't provide details about the range of prices attendees pay to be at each fundraiser with Biden, saying they vary depending on the type of event. Some offer donors small gatherings with the president, while others are designed to attract larger crowds, allowing for more public interaction, which can include question-and-answer sessions.

Federal law allows donors to give a maximum of $36,500 per year to the national party committees and $2,900 to individual federal candidates per election.

Former President Donald Trump launched his reelection effort the same day he was inaugurated in 2017, an unusual move that allowed him to amass a substantial war chest during his first years in office. But some donors ultimately hit the legal limits in the waning days of his 2020 campaign.

That, combined with profligate spending, left Trump's campaign facing a shortfall in the race's closing weeks. Biden, by contrast, has not yet launched his reelection campaign and his fundraising is directed toward the DNC.

Trump held his first reelection fundraiser on June 28, 2017 — 40 months before the 2020 election. The $35,000-per-plate dinner was held at the Washington hotel just a few blocks from the White House that he had owned — before selling it this week — which become a haven for his supporters and those seeking influence during his presidency.

That event raised about $10 million, the Republican National Committee said at the time. Unlike Biden and former President Barack Obama, Trump generally did not allow reporters to view his public remarks to donors.

The DNC says it raised $204-plus million for the cycle. The committee had its best fundraising first quarter of a midterm year, raising $42 million so far in 2022, with about 60% of all donations coming through what it called grassroots channels.

The DNC has committed at least $48 million to help Democratic parties in different states do things like improve infrastructure and organize get-out-the-vote efforts — after spending only $30 million on its entire 2018 midterm strategy.

The committee says it has funded nearly 450 staff on state party payrolls dedicated to campaigns this cycle, and invested over $20 million in state parties’ technology, including improving data efforts.