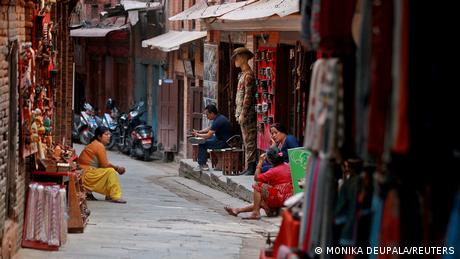 Nepal's industrial sector has been hit hard by power cuts in recent weeks, with many small, medium as well as large firms forced to shut down operations due to a lack of electricity.

The Himalayan nation relies heavily on energy imported from India, especially during the summer months.

But power generation in India has been running low as it faces one of the worst power crises in years, resulting in little electricity left for export to Nepal.

The Asian giant, which shares a long land border with Nepal, has itself faced power blackouts amid high demand, due to the hottest pre-summer months in decades, industrial activity and supply bottlenecks due to shortages of coal, which produces as much as 70% of its electricity.

Pre-summer inventories at Indian thermal power plants have fallen to one of the lowest levels in recent years, forcing the Indian government to reverse its course on overseas coal purchases and arrange supplies by accelerating imports.

But imports have become pricier since the start of the year as coal spot prices shot up after Russia launched its invasion of Ukraine at the end of February.

"We import 30-40% of our electricity needs from India during the dry season," Suresh Bahadur Bhattarai, spokesperson for the Nepal Electricity Authority, told DW.

"Now, due to severe shortages of coal supplies and higher domestic demand, India itself is facing a power crisis. So we could import only a quarter of our demand."

Bhattarai stressed that power cuts will likely remain in place for a few more weeks, before the onset of the monsoon season, which officials hope will bring enough rain to up the water level in Nepal's rivers and boost hydropower generation.

Electricity generation in Nepal is largely based on its run-of-the river type hydro projects, which are intermittent energy producers that generate more power when seasonal river flows are high and less during the dry summer months.

Gokarna Awasthi, director general of the Federation of Nepalese Chambers of Commerce and Industries (FNCCI), an umbrella organization of more than 900 private sectors companies, said that the industrial sector is suffering because of the problems.

"Industries are not able to operate in their full capacity in the absence of electricity," he said. "They are using diesel generators to try to fill the supply gaps."

Nepal bans many imports to save foreign reserves

The power outages come at a time when Nepal is already grappling with the problem of depleting foreign exchange reserves.

The ban, in effect until the end of the fiscal year in mid-July, also forbids imports of toys, playing cards and diamonds.

The main sources of foreign currency for Nepal — which has few exports and imports almost everything from abroad — are tourism, remittances from overseas workers and foreign aid.

The number of visitors plunged after the onset of the COVID pandemic, while remittances — which account for around 60% of the nation's foreign exchange reserves — also dropped as Nepali workers abroad had to return home during the global health crisis.

Although there was a recovery in foreign arrivals in the first quarter of 2022, Russia's war against Ukraine has put an end to the flow of tourists from those two countries, while contributing to a rise in prices of everything from edible oils and food stuffs to air fares.

Shortened work week to save fuel

The price rises and the soaring import bill have adversely affected the trade deficit and the value of the nation's currency, prompting fears that it could lead to a balance of payments crisis, which occurs when a nation is unable to pay for its imports or service its foreign debt payments.

Nepal's gross foreign exchange reserves fell to $9.75 billion as of mid-February, down 17% from mid-July last year when its financial year started, Reuters reported. The current reserves are estimated to be enough to support imports for about six months.

Nandini Lahe-Thapa, director of the Nepal Tourism Board, told DW that the decision is a "fantastically promising step" for the promotion of domestic tourism.

"We were pushing to have a two-day weekend not only for the promotion of tourism, but also for the mental health and leisure of workers," she said, adding that domestic tourism proved to be vital for the survival of the entire tourism and hospitality sector during the pandemic.