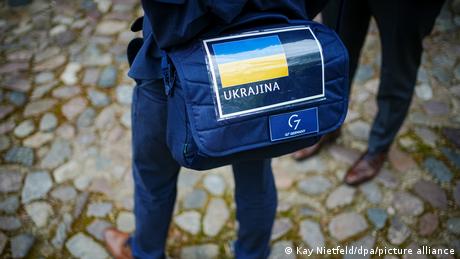 Meeting under the shadow of Russia's war in Ukraine, foreign ministers from the Group of Seven (G7) industrialized nations kicked off bilateral talks on Friday in the northern German resort of Weissenhaus.

The annual meeting, which is set to end on Saturday, comes amid concerns that the war in Ukraine could spill over into neighboring Moldova, and that the blockage of grain exports could cause a food crisis in developing countries.

What have ministers announced?

German Foreign Minister Annalena Baerbock said that this year's gathering was a "powerful sign of unity" for Ukraine — as well as Moldova.

Germany, which holds the G7 presidency this year, is hosting top diplomats from Canada, France, Italy, Japan, the UK and the US, as well as guest attendees Ukrainian Foreign Minister Dmytro Kuleba and Moldovan Foreign Minister Nicu Popescu.

Also attending the talks is the European Union's top diplomat, Josep Borrell, who announced another boost of military aid to Ukraine at the start of talks on Friday.

The bloc has approved an additional €500 million ($520 million) in funds for Ukraine specifically for "heavy weapons" that are needed "for this type of warfare," Borrell said. The latest announcement brings the EU's total financial aid for Ukraine to €2 billion.

"It's very important at this time that we keep up the pressure on Russian President Vladimir Putin by supplying more weapons to Ukraine, by increasing the sanctions," Truss said on the sidelines of the talks.

"G7 unity has been vital during this crisis to protect freedom and democracy and we'll continue to work together to do just that," she said.

The US is being represented in Weissenhaus by Under Secretary of State Victoria Nuland while Antony Blinken recovers from a COVID-19 infection.

What can we expect from the talks?

After a meeting of bilateral talks, the G7 foreign ministers will gather in the afternoon to dive into the impact of Russia's invasion of Ukraine,

Richard Walker, DW's chief international correspondent said that the ministers will try to address a food crisis caused by millions of tons of grain that are currently blocked in Ukraine's ports. The grain exports are urgently needed in the Middle East and several African countries.

The G7 is "trying to work out logistical solutions to try to get that grain out of Ukraine by other routes — over rail or over road … for instance in Poland," Walker said, speaking from the site of the G7 meeting.

"But there are lots of logistical headaches around that, so it's unclear how much headway will really be made on that," he added.

Russia has blamed international sanctions for the food crisis, while western nations have said Russia's blockade of Ukraine's ports is preventing the train from being sent to other countries.

"We're in a battle of narratives here," Walker said, adding that both sides are "engaging in this narrative battle for hearts and minds, particularly in the developing world."

Also on the agenda will be the issue of relations with China and its ties with Russia. The foreign minister of Indonesia, which currently holds the rotating chair of the G20 group of industrialized nations, is scheduled to virtually attend meetings later on Friday, when the G7 ministers discuss concerns over Beijing.