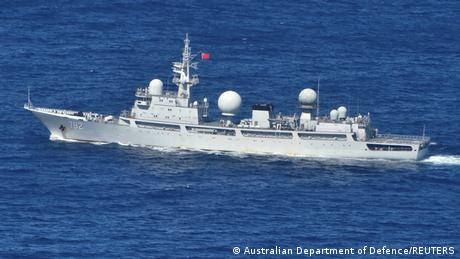 Australia's Defense Ministry said on Friday that a Chinese naval intelligence ship had been detected in waters off the northwestern coast of the country.

Prime Minister Scott Morrison said the Chinese navy vessel was not in Australian territorial waters but its presence was "concerning."

"It is clearly an intelligence ship and they are looking at us and we're keeping a close eye on them," Morrison told reporters.

Australian Defense Minister Peter Dutton told reporters he considered it an "act of aggression" because "it has come so far south."

The ship, called the Haiwangxing, "traveled down the west coast of Australia to the vicinity of Exmouth, before changing course to track east along the north-west coast," the Defense Ministry said in a statement, without specifying a timeline.

It added it was closely monitoring the ship's operations in its "maritime approaches."

What else do we know?

Dutton said the ship had been in "close proximity to military and intelligence installations on the west coast of Australia." The intention, Dutton said, "of course, is to collect intelligence right along the coastline."

He added they detected the ship sometime in the last week when it sailed past the Harold E. Holt naval communications station at Exmouth, which is used by Australia, US and allied submarines.

Dutton said the timing of his announcement had nothing to do with federal elections, due on May 21.

China has not yet commented on the incident. Tensions between the two nations increased recently after the Solomon Islands signed a security pact with China.

Australia's defense department added in its statement that it "respects the rights of all states to exercise freedom of navigation and overflight in international waters and airspace, just as we expect others to respect our right to do the same."