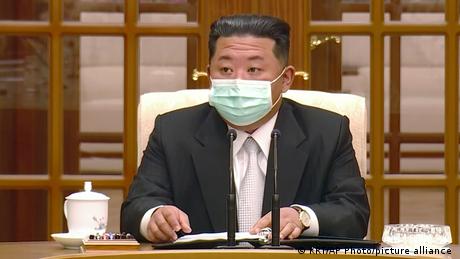 North Korea's KCNA state media on Friday reported the deaths of six people who had been sick with a fever, one of whom had tested positive for COVID-19.

"A fever whose cause couldn't be identified explosively spread nationwide from late April ... Six persons died," it said.

The report added that 187,800 people are being isolated for treatment after 18,000 people were found on Thursday alone to have fever symptoms.

The announcement comes a day after North Korea acknowledged a COVID outbreak officially for the first time since the pandemic began. The country has been placed under a nationwide lockdown to prevent the spread of the virus.

Before confirmation of the outbreak, Pyongyang had maintained that it had managed to stave off the global pandemic, a claim that was widely doubted.

Experts believe the country's health care system will struggle to deal with a major outbreak, with the added challenge that its population of 25 million people has not been vaccinated.

North Korea has declined shipments of vaccines from the COVAX global COVID-19 vaccine-sharing program and the Sinovac Biotech vaccine from China.