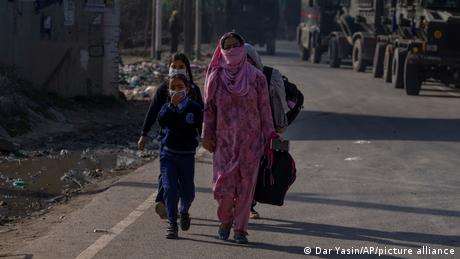 Kashmir, which is currently ruled by the New Delhi-appointed Lieutenant Governor Manoj Sinha, has been without an elected government since 2018 when the BJP walked out of a coalition government with the People's Democratic Party (PDP).

An imposition of the president's rule followed.

Even as locals look forward to an elected government, the uneven distribution of constituencies between the two religious communities — Muslims and Hindus — has raised many eyebrows.

On May 5, a delimitation commission set up by Modi's government ordered an increase in the number of assembly seats in Hindu-majority Jammu from 37 to 43. The Muslim-dominated Kashmir Valley received one extra seat, taking its total from 46 to 47. The new assembly gives the region's Hindu minority more political power, critics say.

The delimitation commission also recommended two reserve seats for Kashmiri migrants, who are mostly ethnic Kashmiri Hindus, who will have voting powers at par with elected legislators and can vote in a motion of no confidence.

Pakistan slammed the commission's report, saying it was aimed at "disenfranchising and disempowering" the Muslim-majority population of Kashmir.

Leading Kashmiri politicians have termed the new order a blatant attempt to bring the BJP to greater power in the region.

"It is empowering voters who the BJP presumes would vote for them. That's why one person in Jammu is now equal to 1.3 people in Kashmir," Ifra Jan, spokesperson of the National Conference, the region's largest political party, told DW.

"It is pulling a fraud on the principle of one person, one vote, which is fundamental to electoral democracy," she added.

But for political analyst Zafar Choudhary, it is a roadmap to enhance interaction between the two regions and at the same time an attempt to break the political hegemony of Kashmir Valley based politicians over the region.

From 'electoral majority' into a 'minority'

Mehbooba Mufti, former chief minister of the region, says the delimitation exercise is an extension of the process which started on August 5, 2019, to disempower Muslims of Kashmir.

"New Delhi has used or misused independent institutions to turn the electoral majority into a minority," she said. "It will be for the first time in the electoral history of the country that elections are being rigged long even before the first vote is cast," Mehbooba said.

Framework of the delimitation of constituencies

New Delhi carried out the delimitation of constituencies during a statutory freeze on the increase or decrease of the parliamentary and legislative assembly constituencies.

In 2002, both New Delhi and India-administered Kashmir amended their respective constitutions, deferring the delimitation of the constituencies until the population census of 2026.

Subsequently, the delimitation commission was set up under the Delimitation Act of 2002.

However, the BJP resumed the practice in the region after the abrogation of the Kashmir's autonomy.

For other parts of India, authorities have set the 2001 population census as their criteria for remapping constituency boundaries, but in India-administered Kashmir, officials conducted the delimitation under the 2011 census.

Opposing the region's new electoral map, scholar Nahid Anjum said: "The delimitation commission has violated the cardinal principle of 'one man, one vote' in J&K (Jammu and Kashmir)."