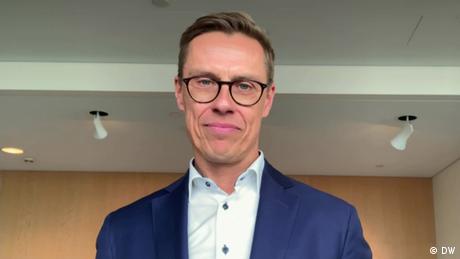 Finland's policy turnaround in favor of joining NATO was "better late than never," former Finnish Prime Minister Alexander Stubb has told DW in an interview, saying he had "been an advocate of Finnish NATO membership for the better part of 30 years."

Speaking after Finland's prime minister and president came out in favor of their country applying for NATO membership "without delay" on Thursday, Stubb said Putin had "made a tactical and strategic mistake, which he's now paying for."

"Without [Russian President Vladimir Putin's] attack on Ukraine, I don't think the Finnish public opinion would have changed as radically as it has," Stubb told DW, adding that "when you kill innocent human beings, women and children, that's when people react."

Throughout the Cold War, Finland pursued a policy it called "active neutrality," whereby it sought to maintain cordial relations with both Western powers and the Soviet Union on its doorstep.

Finland 'very much a security asset'

Stubb, who was prime minister between 2014 and 2015 after a stint as foreign minister and then minister for European affairs and foreign trade, said Finland was an attractive new potential member for NATO, with one of the largest militaries in Europe and a border with Russia that stretches for over 1,300 kilometers (807 miles).

Stubb also said Finland was prepared for anything Russia might do in response to its joining the alliance.

"Remember, Finns are cool, calm and collected. We don't get flustered by much, so we'll see a lot of cyberattacks and probably information wars in the next few days," he said, calling the warnings from Russia "normal Russian rhetoric."

"Nothing is going to happen on the eastern flank because of Finland joining NATO," he added.

He also dismissed Russian threats that it might deploy nuclear weapons to the Baltic region if Finland and Sweden were to join NATO as "fake news," saying nuclear missiles were already stationed in Kaliningrad.

"This is the way in which Russia is trying to intimidate Finland and Sweden out of the decision to join NATO. Of course, the reverse will happen," he said. Kremlin spokesman Dmitry Peskov on Thursday said that Finland joining the alliance would "definitely" pose a threat to Russia and said Moscow would have to consider "military-technical" steps in response, using language reminiscent of how the Russian government spoke about its invasion of Ukraine.

"The more there are threats, the more the popularity of NATO membership grows." he said. Polls in Finland have pointed to a rapid increase in public support for the country joining NATO, from around 50% in February to roughly 75% in May.

Stubb said that parliamentary approval of Finland's NATO application in a vote due next Wednesday was "a foregone conclusion," with all parties more or less in favor.

And he said he also expected a quick ratification of the application — "probably the quickest in the history of NATO membership."

NATO Secretary-General Jens Stoltenberg earlier said that the Finns would be "warmly welcomed," promising a "smooth and swift" accession process.