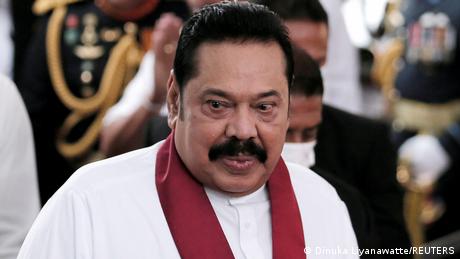 A court in the Sri Lankan capital Colombo on Thursday imposed a ban on former Prime Minister Mahinda Rajapaksa and several of his key allies from leaving the country.

Rajapaksa stepped down as prime minister on Monday following weeks of intense anti-government protests amid an ongoing financial and economic crisis.

The court order targeted the ex-prime minister and his son Namal — also a lawmaker — along with 15 other allies. Additionally, police were ordered to launch an investigation into attacks against anti-government protesters.

The attack triggered a wave of violence and destruction across the country. At least nine people lost their lives since the unrest started.

Why are people protesting in Sri Lanka?

Rajapaksa, who has also previously served as president, is the elder brother of the current president, Gotabaya Rajapaksa.

The monthlong protests have consistently called for the Rajapaksas to leave power. A recent cabinet shift, seen as an offer of compromise, removed a few family members from ministerial positions in the cabinet, including Mahinda's son Namal.

The prime minister only stepped down on Monday after a mob of loyalist supporters came out of his compound to confront the peaceful protesters camped out in front of it with clubs and sticks.

The violence left at least 225 people hospitalized. After resigning, the 76-year-old Rajapaksa was whisked off by heavily armed soldiers to a naval base on the east of the island.

What is the state of Sri Lanka's economy?

Sri Lanka is currently suffering its worst economic crisis since gaining independence from the British Empire in 1948.

Low foreign currency reserves, soaring inflation and rising prices have led to severe shortages of key imports such as fuel, medicine and other essential goods.

Blackouts across the island country have become a regular occurrence.

Colombo is in talks with the IMF after defaulting on its foreign debt, in part accrued thanks to a series of largescale, financially unsustainable projects taken on during the previous two decades that have been dominated by the Rajapaksa family.

Leaders of various political parties are set to meet later on Thursday to discuss the worsening situation. The opposition has repeatedly refused to join a unity government until President Gotabaya Rajapaksa resigns.