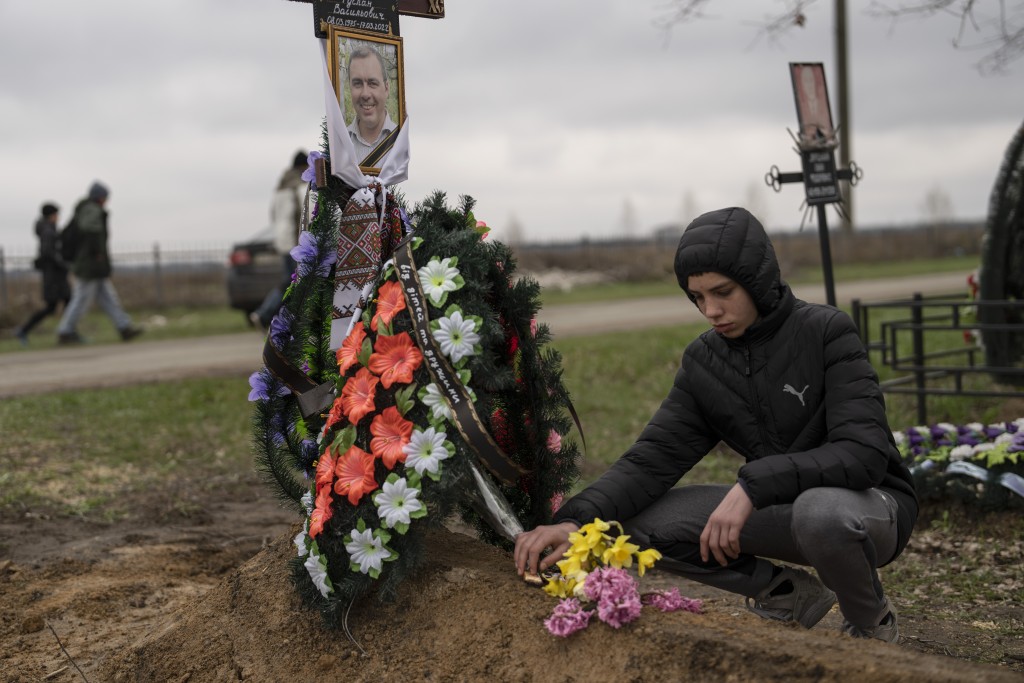 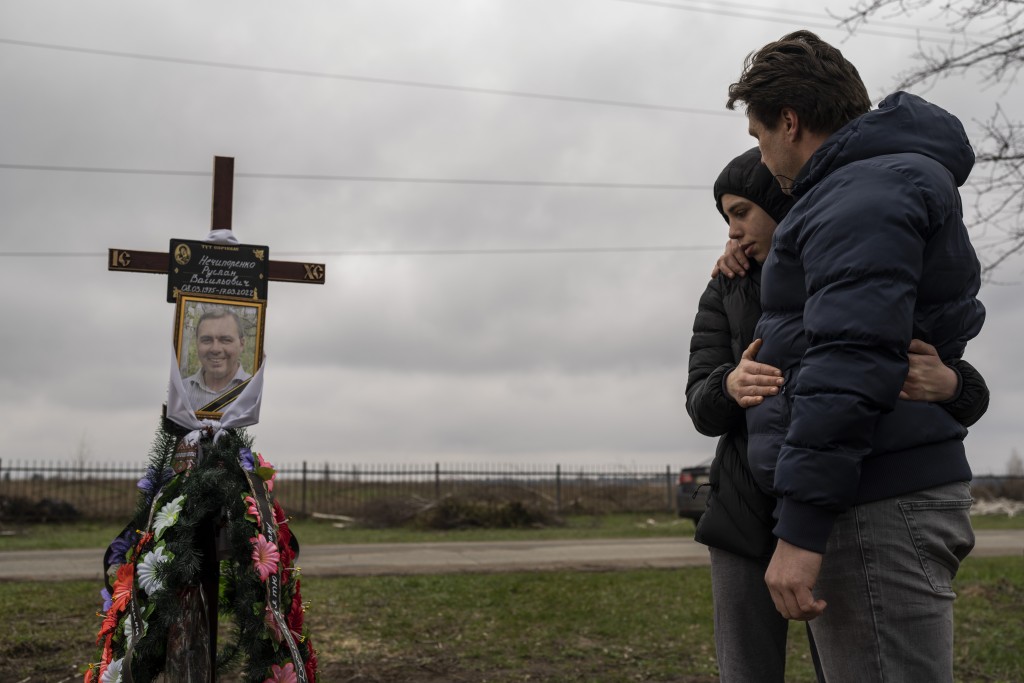 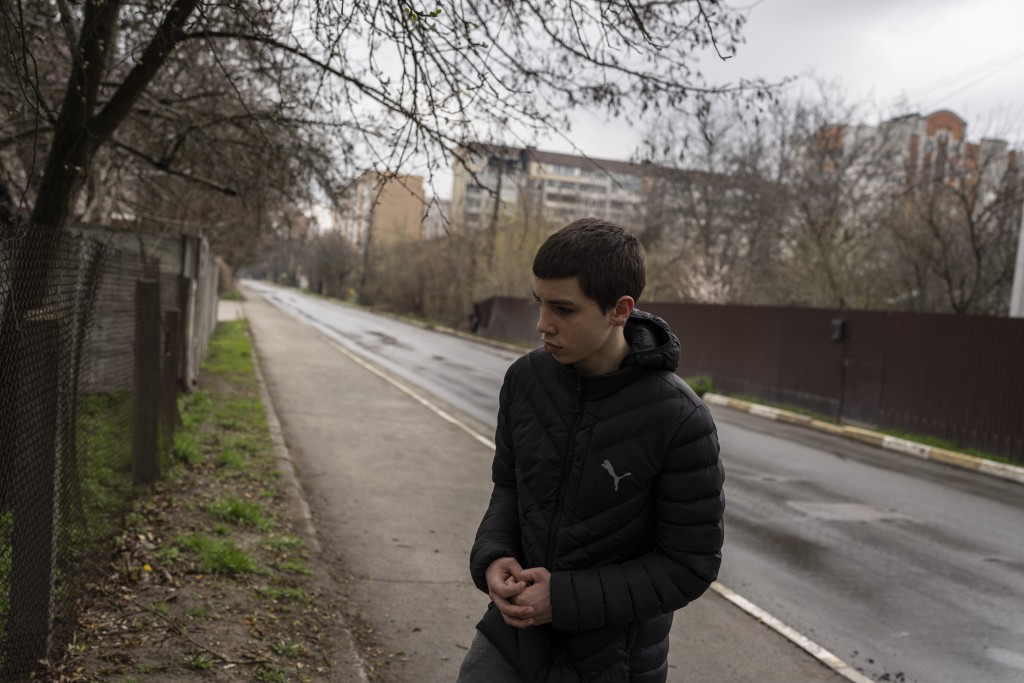 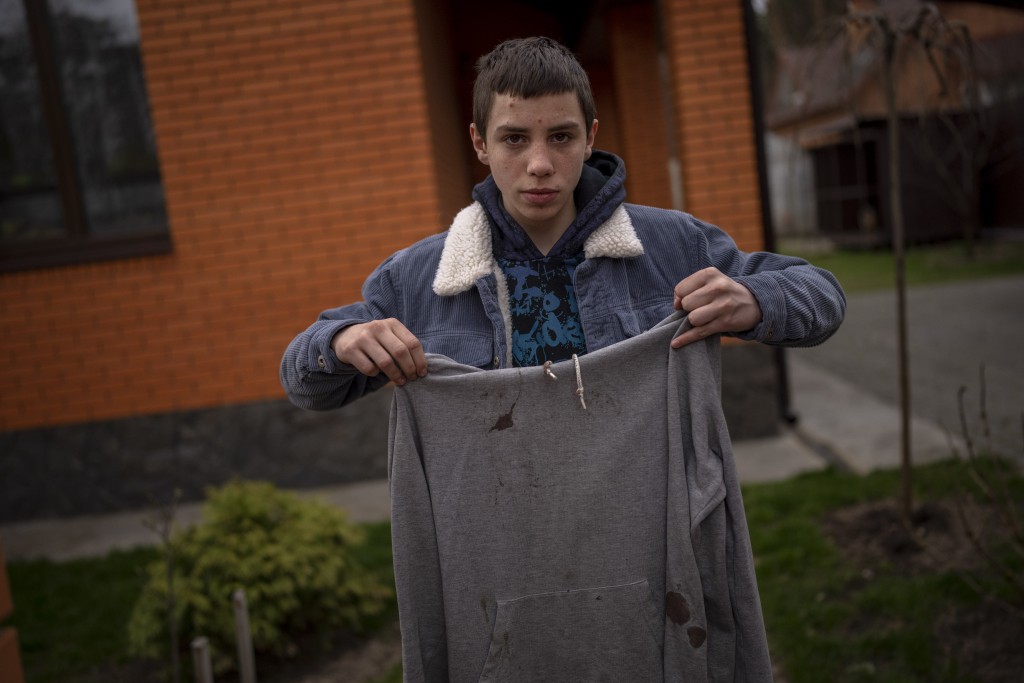 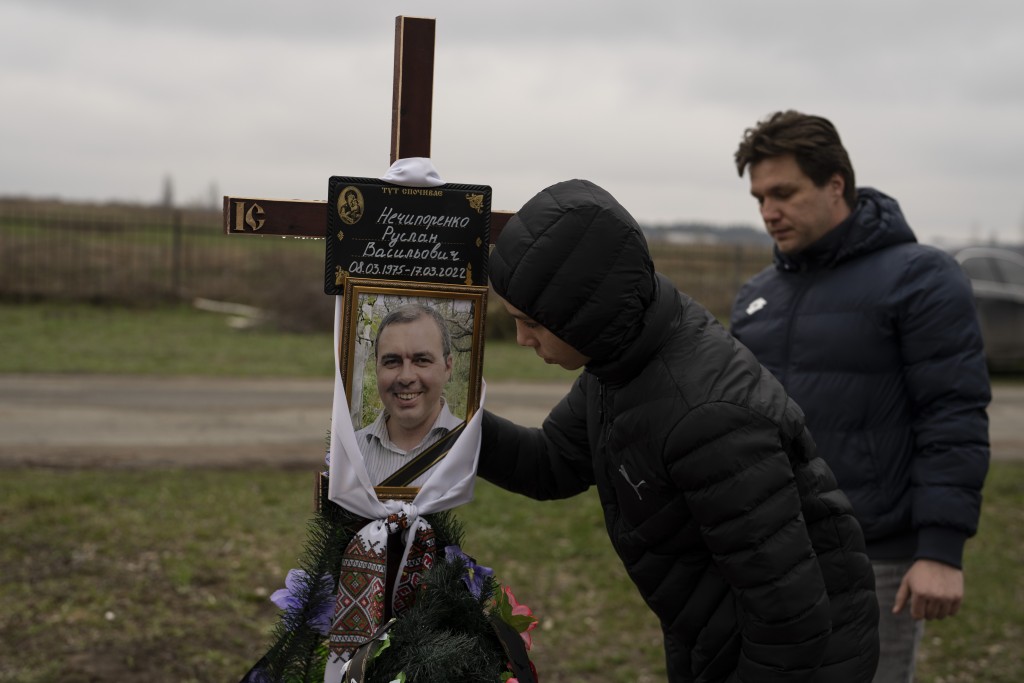 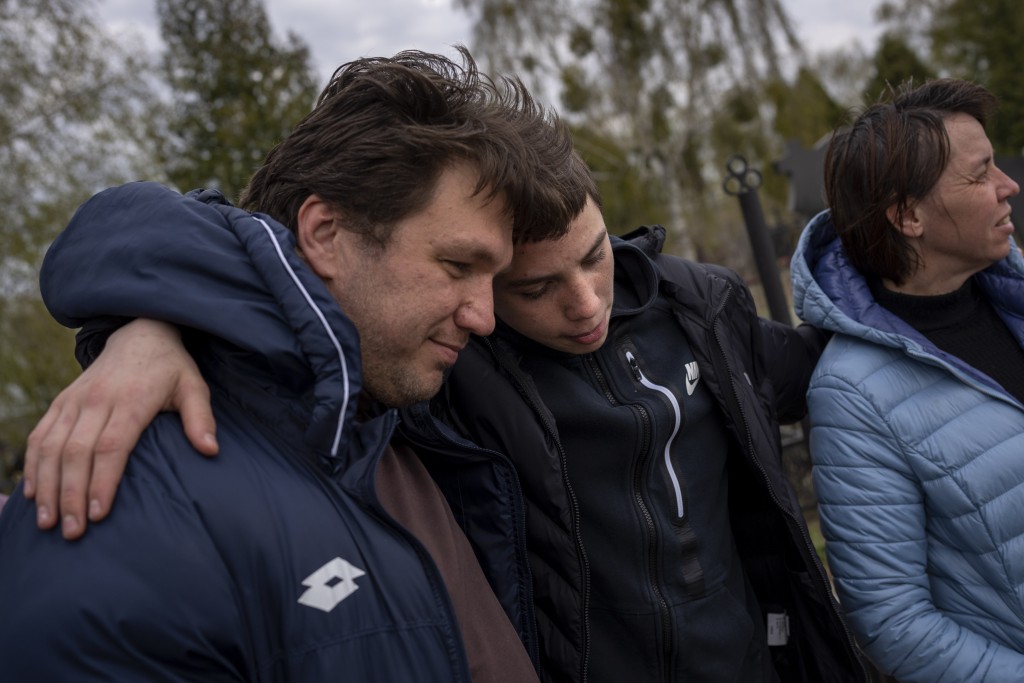 BUCHA, Ukraine (AP) — As he listened to his father die, the boy lay still on the asphalt. His elbow burned where a bullet had pierced him. His thumb stung from being grazed.

Another killing was in progress on a lonely street in Bucha, the community on the outskirts of Ukraine’s capital, Kyiv, where bodies of civilians are still being discovered weeks after Russian soldiers withdrew. Many have been shot in the head.

The 14--year-old Yura Nechyporenko was about to become one of them.

Survivors have described soldiers firing guns near their feet or threatening them with grenades, only to be drawn away by a cooler-headed colleague. But there was no one around to restrain the Russian soldier that day in March when Yura and his father, 47-year-old Ruslan, were biking down a tree-lined street.

They were on their way to visit vulnerable neighbors sheltering in basements and homes without electricity or running water. Their bikes were tied with white fabric, in a sign they traveled in peace.

When the solider stepped from a dirt path to challenge them, Yura and his father immediately stopped and raised their hands.

“What are you doing?” the soldier asked. He didn’t give Yura’s father time to answer.

A shot hit Yura’s hand, and he fell, too. Another shot struck his elbow. He closed his eyes.

A final shot was fired.

Yura’s extraordinary account of an attempted killing by Russian soldiers stands out as international justice experts descend on Bucha as a center of the horrors and possible war crimes in Ukraine. In Bucha alone, 31 children under the age of 18 were killed and 19 wounded, according to local authorities.

“All children were killed or injured deliberately, since the Russian soldiers deliberately shot at evacuating cars that had the signs ‘CHILDREN’ and white fabric tied to them, and they deliberately shot at the homes of civilians,” the chief prosecutor of the Bucha region, Ruslan Kravchenko, told The Associated Press.

The U.N. human rights office says at least 202 children across Ukraine have been killed in Russia’s invasion, and believes the real number to be considerably higher. The Ukrainian government’s count is 217 children killed and over 390 wounded.

The AP and Frontline, drawing from a variety of sources, have independently documented 18 attacks where children were killed that likely meet the definition of a war crime. The number of child victims in the attacks is unknown, and the accounting represents just a fraction of potential war crimes.

Yura is a teenager growing into himself, spindly and spotted, with dark circles pressed under his eyes. As he lies on the floor of his family’s home to demonstrate what happened, he shows the healing holes in his elbow.

His mother, Alla, takes deep breaths to calm herself. Yura, sitting up, wraps an arm around her, then puts his head on her shoulder.

On that awful day, Yura survived the attempted killing by the awkward grace of that teenage constant, his gray hoodie. It was shot instead of him, and he felt it move.

Yura lay on the street for minutes afterward, waiting for the soldier to walk away.

When he finally arrived home, his family called the police. The police told the family that officers didn’t know what to do with the case, according to the boy’s uncle, Andriy. A prosecutor’s report describes the killing and attempted killing in a few bare sentences. Kravchenko told the AP that they continue to work on Yura’s case.

In March, the prosecutor of the International Criminal Court announced that investigations into crimes against children in particular will benefit from a new trust fund. Children account for half or more of those affected by conflict, but are often labeled as too vulnerable to testify or as having inaccurate memories, according to Veronique Aubert, the special adviser on crimes involving children to the ICC prosecutor.

“Prosecutors may want to take up this case because the victim is still alive and can potentially testify,” said Ryan Goodman, a law professor at New York University and former special counsel for the Department of Defense. “It may be difficult if not impossible for a defendant to claim they were somehow justified in trying to kill a child.”

Yura’s family retrieved his father’s body the next day. Yura’s grandmother pleaded with Russian soldiers to let her approach.

With their guns cocked, they let her walk ahead of them. Another soldier in the distance shouted, “Don’t come here or we’ll kill you.” But he didn’t fire.

They brought Yura’s father home in a wheelbarrow and buried him in the yard, in one of many makeshift graves hurriedly dug during the monthlong Russian occupation.

Yura and his family left Bucha the next day along a rare evacuation corridor. They had to pass the scene of the shooting. Yura wore a white sling around his arm, and Russian soldiers asked what had happened.

“I was shot by a Russian soldier,” the boy replied.

At that, his mother was terrified. “I felt everything collapse inside me,” she recalled. “I thought they would shoot us all.”

But the soldiers let them pass. The family left town that day.

The gray hoodie, bloodied at the elbow and with the top seam sliced, is now the centerpiece of the family’s search for justice. After the Russians left, they returned to Bucha and reburied Yura's father.

Yura's mother is thinking of sending the boy overseas for the sake of his mental health. She needs some distance, too.

“I’m never alone physically, but it’s possible to be alone mentally,” she said, near tears. “I try to avoid this.”

She hopes the courts will work, and believes no one should go through what her son did. Yura fears they already have.

“It’s not only me who wants justice,” he said. “People in Ukraine are still possibly being tortured and killed even now.”

Yura turned 15 on April 12. It was a quiet birthday. His father, a good cook, usually grilled to celebrate it.

On April 25, the family again gathered at the grave to mark 40 days after Ruslan’s death, by local custom. Yura quietly lit a candle and placed it on the grave. Then he pulled a hoodie, a black one, over his head to block the chill.

The boy’s uncle, Andriy, fears the trauma of surviving death will catch up with Yura.

“This tears my soul apart,” said Andriy, in tears. “What we see is suffering after suffering."