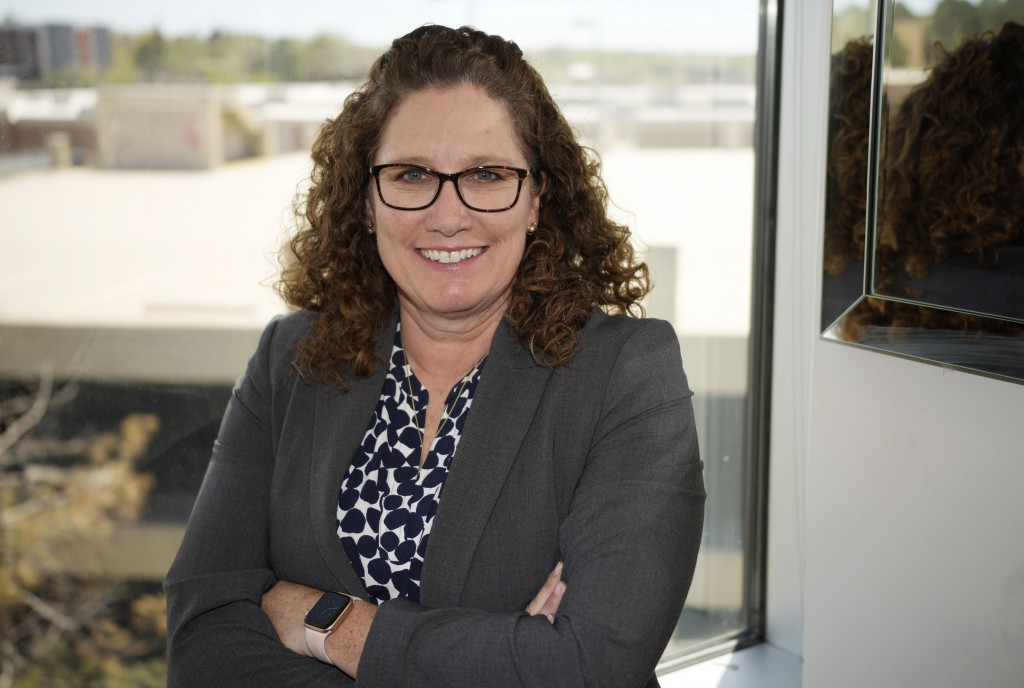 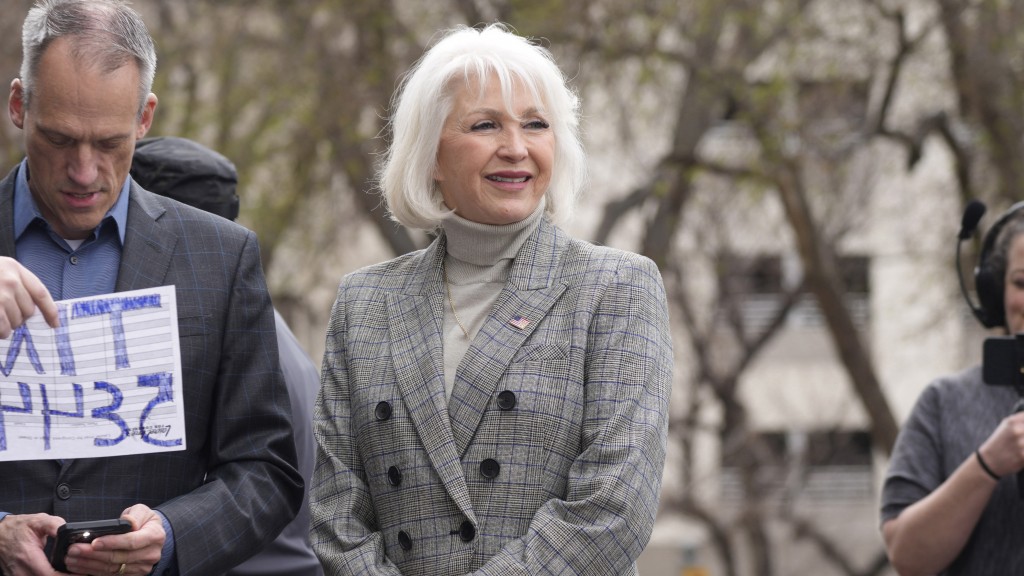 LITTLETON, Colo. (AP) — A handful of curious voters mingled on a suburban Denver brewpub’s patio one recent evening as Pam Anderson told them she could restore professionalism to the office of Colorado secretary of state.

Anderson rattled off her resume — former county clerk, head of the state clerks’ association and ardent defender of Colorado’s mail voting system — making clear that she fit the profile of the sort of technocrat whom Republicans used to back for the top election post in Colorado.

“I'm the only person in this election, including the primary, who has a real record in election integrity,” Anderson said.

Anderson was taking a swipe at her better-known primary rival, Mesa County Clerk Tina Peters, who has become the prime example of the GOP's new approach to running elections.

A grand jury earlier this year indicted Peters for her role in breaking into her own county's election system during a hunt for evidence of conspiracy theories fanned by former President Donald Trump. A judge already barred Peters from running last year's local elections due to the controversy and this week blocked Peters from administering this year's, too. Still, she's become a heroine to those who disbelieve the actual results of the 2020 elections.

“I’ve taken their best shot. They made me sleep on the concrete jail floor for 30 hours because I protected your election data,” Peters told a crowd of 3,000 GOP activists and officials at the state party's convention last month. “They know who to be afraid of.” Sixty percent of attendees voted to place her atop the ballot for secretary of state in their June 28 primary.

For nearly a century, U.S. elections have relied on a sort of partisan truce. They are run by thousands of local officials, often elected in partisan races, and usually overseen by secretaries of state who run statewide along with candidates for hotly contested offices like attorney general and governor. But, typically, election administration itself has been done in a nonpartisan manner, and those who run for positions overseeing it are more technocrats than crusaders.

That is changing after Trump's 2020 loss. The former president is recruiting a class of partisan secretary of state candidates who parrot his lies about losing the election due to fraud and argue he should have remained president. The contest between Peters — she joined Trump at his Florida headquarters of Mar-a-Lago last week — and Anderson is perhaps the starkest battle in the GOP between those traditions.

The two candidates faced off Thursday night in a debate held by a Republican group in suburban Denver. They were joined by the third GOP contender in the race, businessman Mike O'Donnell, but most of the energy came from the clash between Anderson and Peters. The room was split between supporters of the two candidates who would sometimes grumble when the other spoke.

There's no question that the election deniers are winning the fight within the Republican Party. In Michigan last month, Kristina Karamo, a community college professor endorsed by Trump, won the GOP nomination to run for secretary of state after fanning suspicion of the 2020 election results. Candidates with similar stances are running in GOP primaries in every swing state, including for secretary of state in Arizona, Georgia and Nevada.

An Associated Press-NORC poll last year found that two-thirds of Republicans doubt Biden was legitimately elected president. Trump continues to fan the myth that massive voter fraud swung the election. He and his supporters have lost more than 60 court cases trying to demonstrate such fraud. His own Justice Department, along with numerous other investigations and audits, found no significant fraud.

Though Trump's election denial has caught on among the party's rank and file, many GOP strategists fear it could backfire on them in November. In Colorado, some Republicans dread the idea of Peters on the general election ballot.

“The Democrats are going to love it and do everything they can to make every Republican candidate look like they came from the same DNA as Tina Peters,” said Scott McInnis, a former GOP congressman who is now on the Mesa County Commission.

McInnis and other Republican Mesa County commissioners have long clashed with Peters. The local district attorney, a Republican, is overseeing her prosecution. McInnis predicts that Anderson will win the primary.

“I don't think Republican voters are going to vote for someone who has nine felony charges,” McInnis said of Peters.

Still, the enthusiasm for Peters in some parts of the GOP is considerable. She raised $158,000 in the eight weeks since she announced her campaign, compared to $50,000 by Anderson, who reported only having $5,000 left on hand at the end of April. At the state GOP convention, one of a bevy of aspirants for governor won enough votes from the crowd to secure a spot on the primary ballot simply by promising to pardon Peters if elected.

“I agree with what she did. I don't think she did anything illegal,” said Pam Utterback, 67, an ordained minister who banged on a drum appreciatively as Peters spoke at a pre-convention rally in Denver.

Peters' legal jeopardy extends beyond the charges of identity theft, attempting to influence a public official and criminal impersonation filed by the grand jury. She was also arrested after kicking at a police officer trying to serve a search warrant for her iPad, to see if Peters had illegally recorded a court hearing of a deputy accused of burglary and cybercrimes.

Peters' supporters are convinced she's a martyr for the cause. Even if they can't explain precisely what it is Peters claims to have uncovered, they're convinced something went wrong in 2020.

“I think the reason everyone is attacking her is she's for election integrity,” said Adrianna Cuva, 45, a volunteer for a Peters-affiliated candidate who has met Peters. “I think the election was rigged. That's why we're seeing all these problems in our economy."

It's a stark contrast with the sentiment at the brewpub in the Denver suburb of Littleton, where the small group of Anderson supporters stressed the importance of competent, nonpartisan election administration.

“That's what you want, someone who's played it straight,” said Paul Schauer, a former Republican state legislator.

Anderson grew up in Southern California. Her father was a highway patrolman, part of a long line of law enforcement in a family that's instilled in Anderson a reverence for law enforcement. She was elected clerk of the suburban city of Wheat Ridge in 2003 and then of the suburban swing county around it the following year.

She's been witheringly critical of Trump's election lies since they began in 2020 and sits on the board of a nonprofit that distributed $350 million in donations from Facebook founder Mark Zuckerberg and his wife to help fund the 2020 elections, an act that fueled conservative suspicions.

“We need to restore sanity,” Anderson said in an interview.

But she also got into the race because of frustration with the Democratic secretary of state, Jena Griswold, who she contends has politicized the office for Democrats.

And Anderson has been frustrated at how Griswold and other Democrats attack Republicans as a party for election misinformation. She cites some Republicans who have stood up for truth and nonpartisanship in election administration. One is Stephen Richer, the clerk in Arizona’s Maricopa County, who pushed back strongly against a conspiratorial, Trump-supported pseudo-audit of the election.

“There are Republicans across the country fighting the good fight on elections,” Anderson said.

This story has been corrected to show the spelling of the Mesa commissioner’s surname is McInnis, not McGinnis.