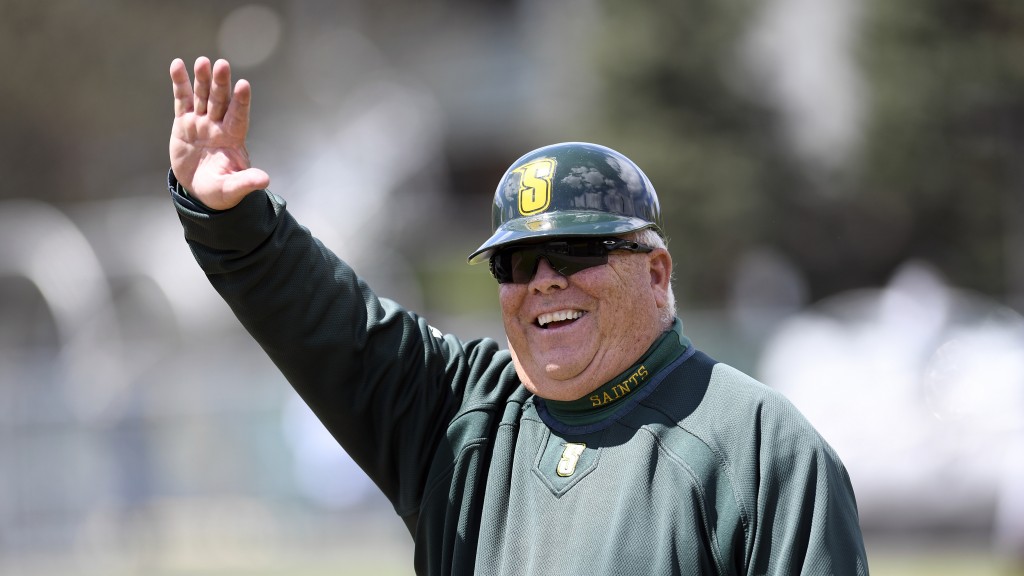 LOUDONVILLE, N.Y. (AP) — Siena baseball coach Tony Rossi puts it plain and simple — he's been addicted to baseball since his first hit as a 7-year-old.

That was 71 years ago. Although he's coped with cellphones and social media, his 53rd season with the Saints won't be the last.

“I have no hobbies,” said Rossi, the longest-tenured coach in Division I baseball. "This is my hobby. It’s my everything that I want to do, and have wanted to do. It’s going to have to be grappling hooks to pull me off or something like that. I just hope I don’t fall face-down because I still coach third.”

Rossi, who grew up and still lives in nearby Schenectady, has been a busy man his entire life. He taught middle school math for more than three decades while he and wife Val raised two children, managed the Sons of Italy to three championships in five years in the Albany Twilight League, and served as assistant athletic director at Siena. He was named baseball coach in 1970 — two days before the Beatles broke up — after briefly coaching junior varsity lacrosse.

“Tony was terrific,” said Richard Hunt, a lifelong educator who was a pitcher-first baseman on Rossi’s first teams. “He made us love baseball. He let us be students. I can’t say enough about what a great experience it was."

The Saints were a Division II school in Rossi's first seven years before moving to the top level. They've been a member of the Metro Atlantic Athletic Conference since 1990, and Rossi's 401-329 conference record makes him the all-time winningest coach in any sport in MAAC history.

The wins against teams with similar talent levels matter, but not so much as the real reason the players attend the small Catholic school (enrollment around 3,300) in Loudonville, New York, just outside the state capital of Albany.

“I’ve always harped on the education,” Rossi said. "I always tell them, we have a game tomorrow and some guys are going to stay in class. They’re not coming until after their classes. That’s the important thing. They have to stay on task. Otherwise, they’re not going to make it through.”

A workaholic who can't remember ever missing a day, Rossi arrives at his second-floor office overlooking Connors Park, the school's baseball field, long before the crack of dawn — usually around 4 a.m. — and long before first-year assistant coach Joe Sheridan and manager Alex Feuz pop in.

Fairleigh Dickinson coach Rob DiToma knows the routine. He worked for Rossi in 2009.

“I’ve been the head coach here three years and I feel like I’ve aged 20 years in those three years,” said DiToma, whose Knights lost at home to Siena in mid-March. “He doesn’t look like a lot of coaches we play against, he’s older, but my players were amazed how locked into the game he was. He doesn’t seem to miss anything, still. You do anything for 50 years, you would probably naturally get lazy with it and all that stuff. It’s not in his nature.”

Rossi, who’s won five MAAC championships and six coach of the year awards, schedules games against top-flight teams from the South to start each season to give his players experience against some of the best talent. So given Siena's limited resources — assistant coaches regularly come and go — it's not surprising that Rossi's career record is 933-1,187-8, with 873 of the wins in Division I. Still, since 1985 he's had 20 20-win seasons and three with 30 or more victories, highlighted by a program-record 34 in 1999.

This year hasn’t been so kind. Plagued by injuries that left the roster razor-thin with just 10 position players, the Saints are 10-32 overall and ninth in the 11-team MAAC at 7-11.

Rossi counts recruiting as the most difficult part of the job, although he does have a keen eye for talent. Left-hander John Lannan, who pitched eight seasons in the majors, mainly for the Washington Nationals, is among more than 30 Siena players who signed contracts with major league organizations.

As for social media, he deals with it as best he can — he doesn't go on Facebook or Twitter — but don’t even mention the transfer portal.

“I think it’s the stupidest thing in the world, without a doubt,” he said. “I lost five kids to the portal last year.”

And he’s losing another. Senior left-hander Ben Seiler, a homegrown talent, has decided to go elsewhere for his final season of eligibility as a graduate student. Rossi took the news in stride.

“He wants me to be successful,” said the 6-foot-6 Seiler, who struck out an NCAA season-high 19 batters in a nine-inning, no-decision performance last month against Niagara, throwing 152 pitches all the while communicating with Rossi as the pitch count mounted. “He let me roll, so I’m lucky. He wants me to strive to be the best pitcher I can be. I thank him for that. These four years have been amazing.”

Val, a retired elementary school teacher, is the rock in a relationship that began in college when Rossi played ball at Brockport State University in Rochester, New York. The ultimate baseball widow, she knows grappling hooks would be useless.

“It’s been my life. People say, ‘How do you put up with it?’ I’ve done it so long that when he’s around a lot — watch what you wish for,” she said, with a chuckle. "I don’t know how long he can keep going, but obviously there will be an end.”

Rossi is poised to match the longevity of Bob DeFelice, who just retired at age 80 after 54 years at Division II Bentley University near Boston. An even 60 has a nice ring. That would put Rossi at the top, one more season than the late Gordie Gillespie, who holds the all-time college record.