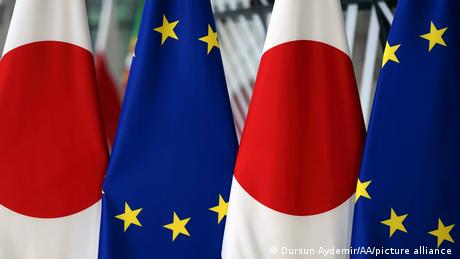 Conflict in Ukraine and increasing Chinese influence in the Indo-Pacific region are expected to be high on the agenda Thursday when European Union senior representatives and Japanese Prime Minister Fumio Kishida are scheduled to hold talks.

In a statement, the EU said the summit will serve as "an opportunity to display the increasingly deep and dynamic alliance" between Brussels and Tokyo and demonstrate shared values.

The day-long summit is scheduled to address joint efforts to combat climate change and strengthen trade and digital partnership. Both sides will also discuss Japan's timeline for relaxing a ban on foreign tourists entering the country, imposed two years ago to halt the spread of the coronavirus. Talks, however, are expected to be dominated by the critical situation in Ukraine and challenges posed by China.

"The partnership between Europe and Japan is already established and on-track so there are no problems that need to be addressed, so I see this as more of an exercise in both sides underlining their support for the other," said Robert Dujarric, co-director of the Institute of Contemporary Asian Studies at the Tokyo campus of Temple University.

Tokyo's support for Ukraine to date has been limited to sanctions on Russian companies and individuals and the provision of non-lethal military equipment, such as helmets and body armor, and medical equipment.

Tokyo is limited in the assistance it can provide under the terms of the constitution that was adopted after Japan's defeat in World War II, Dujarric said. But Tokyo has arguably acted more quickly and done more in connection to the Ukraine crisis than it has in response to any other similar situation since 1945, he added.

During the Gulf War of 1990, for example, Japan was roundly criticized for refusing to commit any personnel or support to an international coalition's campaign to eject Iraqi forces from Kuwait.

But a new-found assertiveness could give Japan a bigger say on the world stage.

In return for its clear support against Russian aggression in Ukraine, Japan will be seeking assurances of its own, Dujarric told DW.

"Japan will use the meeting to get Europe to commit again to a 'rules-based world order' and a 'free and open Pacific,' which serve as a shorthand for a stronger position against Beijing's ambitions in the region," he told DW.

"China is clearly Japan's largest security concern and Kishida will want to make sure that Europe does not forget that Japan came to their assistance on Ukraine should a similar crisis occur in this region."

China has in recent years adopted a more aggressive and expansionist policy, unilaterally seizing disputed islands in the South China Sea and transforming them into formidable military bases, ratcheting up pressure on Taiwan, and intruding into disputed waters in the East China Sea.

Earlier this week, Chinese Coast Guard ships entered territorial waters surrounding the Senkaku/Diaoyu archipelago, which is under Japanese administration but claimed by Beijing as its territory,

Meanwhile, Japan's Self-Defense Forces are keeping an eye on a Chinese aircraft carrier and its accompanying support fleet as the vessels carry out exercises off the coast of Taiwan.

'I do not see Japan joining NATO'

Hiromi Murakami, a professor of political science at Temple University, said there has been a discernible change in Japan's security stance in recent years, with a nation that was not long ago reluctant to become embroiled in disputes elsewhere in the world now taking a more proactive position.

Beijing's increased influence in the South China Sea region, followed more recently by events in Ukraine, has had an impact on Tokyo's attitude towards its own security and that of its allies, she said.

"This summit is interesting because security is such an important part of the talks," she said. "In the past, trade and economic opportunities would have been far more prominent.

"We are seeing Japan participate globally to a far higher degree than in the past, such as Foreign Minister [Yoshimasa] Hayashi attending the recent NATO conference," she pointed out. "Actions such as this might suggest to Europe that Japan can play a bigger international role," she added.

"I do not see Japan joining NATO, although Sweden and Finland appear to be planning to do that as a result of the Ukraine situation, but I do think it is possible that informal discussions this time around could lead to a more concrete security connection in the future, which will be very important to the long-term futures of both Europe and Japan," Murakami said.