TAIPEI (Taiwan News) — A three-car accident on National Highway 1 in central Taiwan caused four injuries Wednesday afternoon (May 11), including one man whose legs suffered severe fractures after he was hit while getting ready to place a warning triangle behind the scene of the accident.

The Miaoli County Fire Bureau received a report at 1:18 p.m. that a traffic collision involving a white sedan, gray sedan, and truck had happened in the northbound inner lane at the 126.4-kilometer mark of National Highway 1, CNA reported.

When emergency medical services workers arrived at the scene, they found a man lying under the central guardrail with severely fractured legs and a woman trapped inside the gray sedan. A rescue truck was then called to the scene to get the woman extracted from the vehicle.

According to the initial police investigation, a white BMW was suspected to have a tire blowout, which caused the gray sedan to crash into it from behind and come to a stop in the inner lane. As the man in the white sedan got out and proceeded to place a warning triangle behind the scene, a truck came and rammed into the gray car, pushing it forward. The man was sandwiched between the two sedans and both his legs broke, while the other three suffered mostly minor injuries.

Police said none of the three drivers had consumed alcohol before the collision. 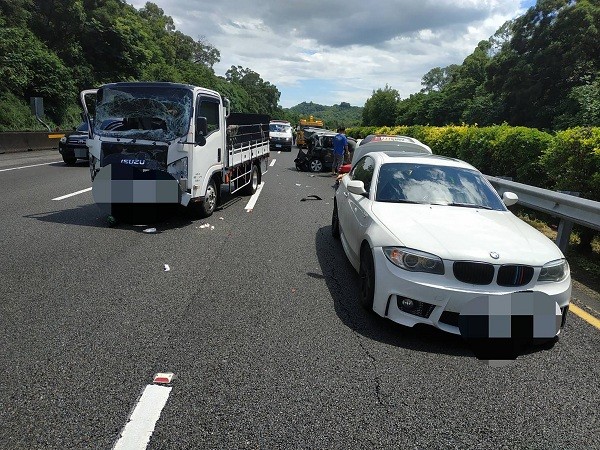