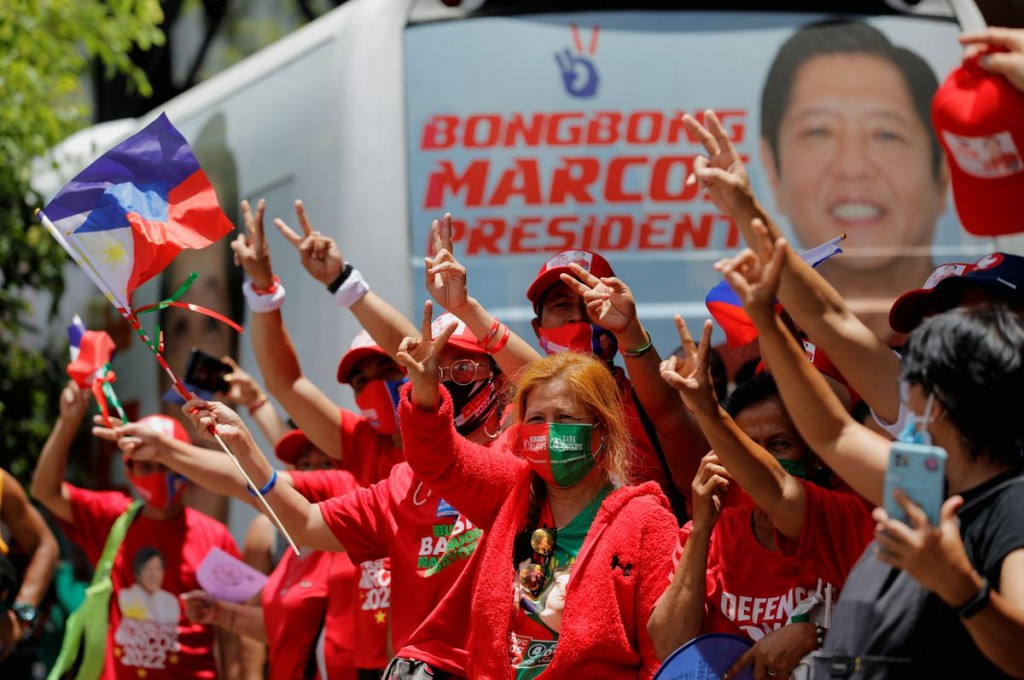 The decisive victory of Ferdinand Marcos Jr. in the Philippines' presidential election on Monday is set to re-shape the Southeast Asian country's relations with China and the United States as he seeks closer ties with Beijing.

Marcos, the son and namesake of the country's former dictator, has long-standing ties with China and is seeking a new deal with Chinese ruler Xi Jinping over the contested waters of the South China Sea.

Marcos's relations with the United States, on the other hand, are complicated by a contempt of court order for his refusal to co-operate with the District Court of Hawaii, which in 1995 ordered the Marcos family to pay $2 billion of plundered wealth to victims of Marcos Sr.'s rule.

The Philippines is a fulcrum of the geopolitical rivalry between the U.S. and China, with its maritime territory encompassing part of the South China Sea, a strategic and resource-rich waterway over which China also claims sovereignty.

In 2016, an arbitral tribunal constituted under the International Law of the Sea ruled in favour of the Philippines over China's claim, a decision seized upon by other claimant states, as well as the U.S. and its allies concerned by China's construction of military installations on islands in the waters.

But in interviews during the election campaign, Marcos said the ruling was "not effective" because China did not recognise it. He would seek a bilateral agreement with China to resolve their differences, he said.

"If you let the U.S. come in, you make China your enemy," he told DZRH Radio. "I think we can come to an agreement (with China). As a matter of fact, people from the Chinese embassy are my friends. We have been talking about that."

A spokesperson for the Chinese foreign ministry said on Wednesday the two countries, "facing each other across the waters, enjoy a longstanding traditional friendship" and that China remains "committed to good-neighbourliness" under the incoming president.

Antonio Carpio, the former Supreme Court Judge who led the Philippines' legal team at the arbitral tribunal, said Marcos's stance was a "betrayal".

"He's taken the side of China against the Philippines," he said.

Rommel Banlaoi, a Manila-based security expert, said Marcos, also known as Bongbong, wanted friendlier ties with China but not at the expense of ceding territory.

"He's open to direct consultations and bilateral negotiations with China to settle their differences," he said. "He is willing to explore areas of pragmatic co-operation with China, including the development of natural gas and oil in the West Philippines Sea."

The West Philippines Sea is within the Philippines' exclusive economic zone in the South China Sea, but is also claimed by China. There have been repeated clashes between vessels belonging to the two countries in the area in recent years.

Marcos is also keen to attract investment from China for his ambitious infrastructure agenda, said Banlaoi. "The Marcoses have very fond memories of their trips to China."

Marcos's father ruled the Philippines for 20 years until 1986 and was a close U.S. ally but began engaging with China after diplomatic relations were established in 1975.

A year earlier, Marcos Jr., then 18, accompanied his mother Imelda to Beijing in a historic trip that paved the way for the diplomatic detente. Footage of the trip shows the beaming youngster meeting Chinese leader Mao Zedong.

It was the first of many visits. In a cable sent to Washington D.C. in March 2007, obtained by WikiLeaks, the U.S. embassy reported that Marcos "travelled frequently to the PRC in 2005 and 2006 to drum up business".

A month after the cable was written, China opened a consulate in Laoag City, capital of the family's fiefdom in the province of Ilocos Norte, where Marcos was governor. Laoag City has a population of just 102,000 in a country of almost 110 million people and is one of two consulates outside the capital Manila.

The United States has upped its engagement in Southeast Asia, and the Philippines, in recent months, to combat China's "coercion and aggression" in the region.

In March and April, more than 5,000 U.S. military personnel undertook exercises with their Philippine counterparts, the largest in seven years. read more

Renato Cruz De Castro, an international affairs analyst at De la Salle university in Manila, said the manoeuvres highlighted how strategic imperatives had forced outgoing Philippine President Rodrigo Duterte to build strong relations with Washington despite his hostility to the country's former coloniser. Soon after he was elected, Duterte called for the Philippines' "separation" from the U.S. and courted China.

"Duterte realised that, whether you appease or challenge China, it doesn't matter. They are still going to try to take your maritime territory," he told Reuters.

"Marcos might have some issues with the United States (but) he will face constraints from his bureaucrats and the armed forces who really value the alliance."

U.S. State Department spokesperson Ned Price said during a press briefing on Tuesday it was too early to comment on the results of the Philippines election or the impact it might have on relations, but said "we look forward to renewing our special partnership" and working with a new administration in Manila.

"As friends, as partners, as allies we’ll continue to collaborate closely to advance a free and open, connected, prosperous, secure and resilient Indo-Pacific region," Price said. "We’ll also continue...to promote respect for human rights and the rule of law, which is fundamental to U.S. relations with the Philippines."

Marcos hasn't visited the United States for 15 years, fearful of the consequences given he and his mother are facing a contempt of court ruling and a $353 million fine. That's on top of the $2 billion payout he and his mother have been ordered to pay to 9,539 human rights victims, of which only $37 million has been recovered, according to the lawyer who launched the class action, Robert Swift.

"Somebody might think and say, 'OK, Let's jail this person'. They can do that," Marcos told a Philippines journalist, Anthony Taberna, in August. "We don't take that risk anymore."

A spokesman for Marcos did not immediately respond to requests for comment on his U.S. travel plans as president.

The U.S. State Department and Department of Justice did not respond to requests for comment about whether Marcos would be granted diplomatic immunity if he visited. Swift, for his part, expected that he would get the customary immunity.

"Bongbong Marcos's apparent victory will be met with disappointment among many in Washington," said Greg Poling, director of Southeast Asia Studies at the Washington-based Center for Strategic and International Studies.

"But it doesn't change the fact that the U.S.-Philippines alliance is more vital than ever and the United States needs to continue working to deepen it."

Banlaoi said Marcos would seek to preserve the U.S. alliance but keep his options open.

"Depending on how the bilateral relationship of the Philippines and the U.S. proceeds under BBM, renegotiating the mutual defence treaty remains an option," he said, using another nickname for Marcos.