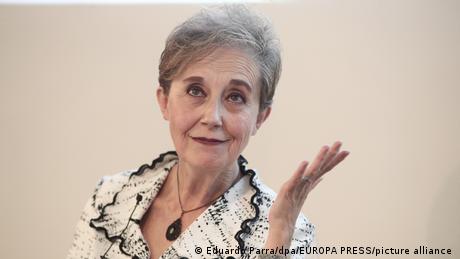 The Spanish government has fired the director of its top intelligence agency after the disclosure of the hacking of politicians' cellphones.

Spanish Defense Minister Margarita Robles announced on Tuesday appointing Esperanza Casteleiro, who has served as the second highest rank in Spain's Defense Ministry, as the new director of the National Intelligence Center (CNI).

"The government has decided today to make a change in the leadership of the CNI," Robles told a news conference after a Cabinet ministers meeting.

What was the scandal?

Pegasus spyware infiltrates mobile phones to extract data or activate a camera or microphone to spy on their owners. Its developer, Israeli company NSO, says it only sells the Pegasus spyware to government agencies.

In April, Canadian cybersecurity watchdog Citizen Lab said the phones of over 60 people linked to the Catalan pro-independence movement had been hacked using the Pegasus spyware.

Citizen Lab reported that the hacks started in late 2019, with Esteban in charge of the CNI.

According to Spanish officials, Esteban herself admitted in a closed-door meeting last week that her agency had hacked the phones of several Catalan separatists after receiving judicial permission.

The controversy has sparked a political crisis between Sanchez's minority government and the Catalan separatist party ERC, which Sanchez's fragile coalition often relies on to pass legislation in parliament.

Esteban, 64, became the first woman to head the CNI in July 2019. She initially served on an interim basis and was later appointed to a permanent position in February 2020.

In 2017, Esteban's predecessor came under fire for failing to stop preparations by Catalan separatists to hold an independence referendum that had been deemed illegal by Spain's top courts.

What did the government say?

Robles said the fact hacks of government phones took a year to discover, "well, it is clear there are things that we need to improve."

Officials had said Sanchez's phone was tapped in May 2021 and Robles' in June 2021. The phones in question were work phones provided by the state.

"We are going to try to ensure that these attacks don't happen again, even though there is no way to be completely safe," Robles said.

"Since then there are no traces of Pegasus infections" of the phones of Cabinet ministers, she said at Tuesday's joint news conference with Robles.

Some Spanish media had pointed fingers at Morocco,which had bitter ties with Spain at the time. However, Madrid said there were no evidence to back the claim.