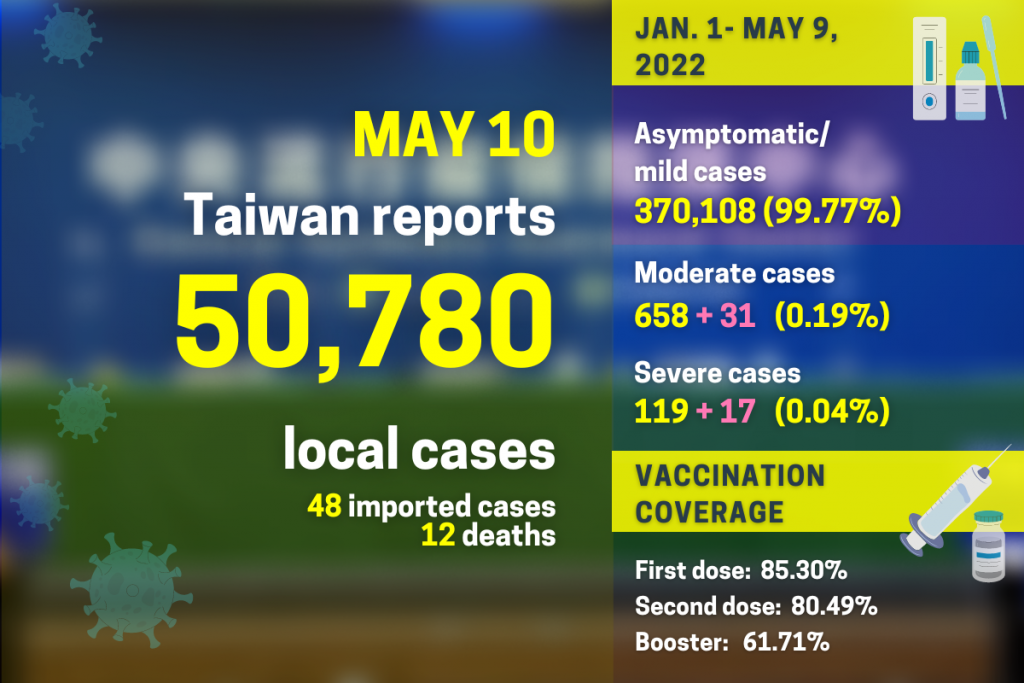 TAIPEI (Taiwan News) — The Central Epidemic Command Center (CECC) announced 50,780 local COVID cases on Tuesday (May 10), an increase of 26% over the previous day.

The 12 COVID deaths announced on Tuesday include eight men and four women ranging in age from their 20s to their 90s, all of whom were classified as severe cases. Ten had a history of chronic disease, and three were not vaccinated. Their dates of diagnosis ranged from April 28 to May 8 and dates of death from May 6 to May 8.

The 48 imported cases include 18 males and 30 females ranging in age from under 10 to their 60s. They arrived between April 20 and May 9, and their country of origin is still under investigation.

Up until now, 943 individuals have succumbed to the disease. Of the 928 deaths from local infections, 448 were in New Taipei; 343 in Taipei; 41 in Keelung; 32 in Taoyuan; 16 in Changhua County; 14 in Hsinchu County; seven in Taichung County; six in Yilan County; five in Hualien County; four in Pingtung County, three in Miaoli County; two each in Kaohsiung City and Yunlin County; and one each in Hsinchu City, Nantou County, Tainan City, Taitung County, and Chiayi County. The 15 other deaths were imported cases.