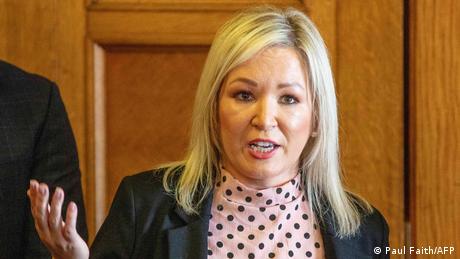 Sinn Fein's vice president, Michelle O'Neill, warned on Monday she "will not be held to ransom" by Brexit disputes holding up the formation of a new power-sharing government in Northern Ireland.

Sinn Fein, once the political wing of the Irish Republican Army, secured the most seats in the Northern Ireland Assembly during last week's elections, becoming the first nationalist party — advocating that Northern Ireland join with the Republic of Ireland and leave the UK — to be the largest one in the Stormont parliament.

"The DUP, but also the British government, must accept and respect the democratic outcome of this election," O'Neill, who could become first minister said.

Power-sharing rules, however, require the participation of the pro-British Democratic Unionist Party (DUP), which came second, to form an executive.

The DUP is opposed to the protocol that effectively established a border in the Irish Sea.

It governs trade between Northern Ireland and the Republic of Ireland and was meant to prevent the return of a hard land border.

But unionists say the checks have created a barrier between Northern Ireland and made a united Ireland, Sinn Fein's aim, more likely.

The British government wanted the EU to agree to major changes, but negotiations faltered so far.

The DUP's position in UK politics during the Brexit process has further complicated their position and damaged their reputation on this issue. At first they propped up Theresa May's government as an alternative solution was being sought, but were then cast aside by Boris Johnson after 2019's elections when he no longer needed DUP support in the British Parliament, before inking a deal he had promised unionists would never be acceptable to his government. Sinn Fein never takes the seats it wins in the British House of Commons as a point of principle.

Prime Minister Boris Johnson has threatened unilateral action to "fix" the protocol , but the EU has warned this could lead to a broader trade war. The EU also says the protocol is what enables Ireland's internal border to remain open and uncontrolled, which is a matter of core importance to Sinn Fein in particular and to many in Northern Ireland.

In a meeting with the UKs' Northern Ireland Secretary, Brandon Lewis, Donaldson reiterated the DUP's demands that the Northern Ireland Protocol be dropped before any executive could be formed.

"We need decisive action... to address the difficulties created by the protocol, whether that is driving up the cost of living, whether that is the harm that it is doing to businesses on our economy, or indeed, in undermining political stability," he said.

Northern Ireland has been without a functioning government since February, when the DUP's leader at the time, Paul Givan, quit as first minister in protest over the protocol.

But after she met with Lewis, O'Neill stressed that the situation was untenable.

"Brinkmanship will not be tolerated, where the north of Ireland becomes collateral damage in a game of chicken with the European Commission," she said. "Make no mistake, we and our business community here will not be held to ransom."

If no executive can be formed, ministers from the previous government would stay in power as a caretaker administration. A new election must be held if there is still no executive after 24 weeks.

Such shutdowns of Northern Ireland's executive have been comparatively common historically. The most recent major suspension ended in January 2020, following almost three years of inactivity at Stormont.