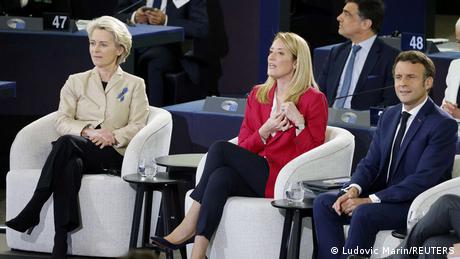 The EU's Conference on the Future of Europe is presenting proposals for a better Europe on Monday to French President Emmanuel Macron and European Commission President Ursula von der Leyen.

With Russia's invasion of Ukraine providing the backdrop to the EU's presentation, von der Leyen is keen for the bloc to react to the challenges on its doorstep while also looking at potential reforms.

With Russia's invasion of Ukraine, "the unthinkable has returned to our continent" and has "reminded us of the dangers of losing both your past and your future," von der Leyen said at the conference on Monday.

The ceremony in Strasbourg marks the conclusion to a proposal the Commission and the European Parliament announced at the end of 2019, with the aim of looking at the medium- to long-term future of the bloc.

President Macron had wanted the Conference to focus on the EU's post-Brexit future and what lessons could be learned from the coronavirus pandemic. However, given recent developments in Ukraine, which shares a border with four EU member states — Romania, Hungary, Slovakia, and Poland — the conflict is set to have an influence on the agenda.

She added that President Volodymyr Zelenskyy officially submitted his country's application to join the EU — filing over 5,000 pages of a questionnaire to move their membership bid forward.

She also took aim at Russia's military parade and President Vladimir Putin's effort to defend the invasion of Ukraine.

"This is the image that I want us to celebrate on the ninth of May. An image far more powerful than any military parade and debate going up and down the streets of Moscow as we speak," von der Leyen said.

Von der Leyen praised the over 300 reform proposals being considered at the conference — and put her support behind efforts to re-think the bloc's practice of needing a unanimous vote to pass measures.

"Standing still is falling back," von der Leyen said in Strasbourg. "This conference has shown us that Europeans are determined not to make this mistake."

In a speech in Strasbourg, he backed efforts to discuss changes to the treaties that govern the bloc.

"We need to reform our texts — it's obvious," Macron said.

He said that while Ukraine "is already a member of the family of the European Union," under current protocols it would take "years if not decades" for Kyiv's membership bid to be finalized.

The French leader also recommended the formation of a new type of "political European community" that would allow countries outside the EU to join in "European core values."

Among the topics for potential reform are a right to high-quality healthcare and more environmental protection.

Another potential change is the possibility that member states would lose their ability to veto decisions agreed by a super majority, something Italian Prime Minister Mario Draghi has been championing recently.

Thirteen EU member-states, however, pushed back against calls for rewriting the EU's treaties, calling it "unconsidered and premature."

"This would entail a serious risk of drawing political energy away from the important tasks of finding solutions to the questions which our citizens expect answers," the group said in a statement.

Although it did not mention voting procedures specifically, the statement did say that the "EU's handling of crises in recent years — including COVID-19 and Russia's ongoing aggression against Ukraine — have clearly shown how much the EU can deliver within the current Treaty framework."

But it is the invasion of Ukraine, and the threat Russia poses, that is likely to have the most dramatic consequence on EU policy.

Fabian Zuleeg, head of the European Policy Center, told news agency AFP: "We are at a crossroads, that for me is unquestionable."

When Russia invaded its neighbor on February 24, "everything changed," he said. "Many taboos have fallen and countries are doing things which they never thought they would do."