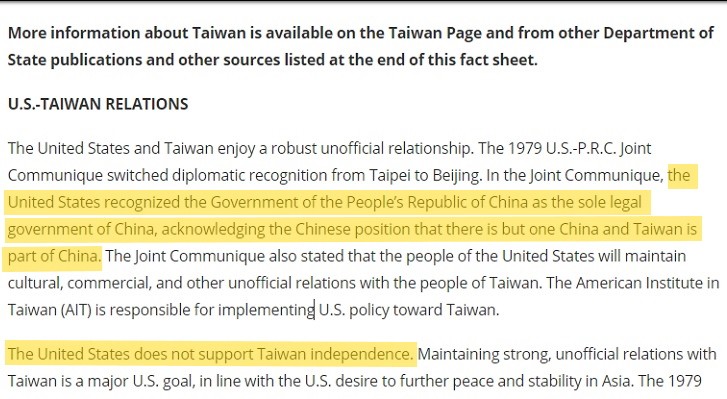 TAIPEI (Taiwan News) — The U.S. State Department last week changed the wording on its U.S.-Taiwan relations page to delete reference to Taiwan as being part of China and removed a statement disavowing Taiwan independence.

According to the Internet Archive's Wayback Machine, as recently as May 3, the U.S. State Department fact sheet on bilateral relations with Taiwan stated that like the 1972 Shanghai Communique, the 1979 U.S.-P.R.C. Joint Communique severing ties with Taipei in favor of Beijing, acknowledged the "Chinese position that there is but one China and Taiwan is part of China." The fact sheet was dated Aug. 31, 2018 during the Trump administration.

In November last year, President Joe Biden could be clearly heard saying to reporters "it's independent. It makes its own decisions," in reference to Taiwan. This statement quickly generated controversy because the U.S. has never officially stated its stance on whether it considers Taiwan to be an independent nation or not.

One hour later, a reporter asked Biden to clarify if U.S. policy had changed since he used the word "independence" when describing Taiwan. Biden denied that his comment meant recognition of Taiwan independence and said that it meant "They have to decide — Taiwan, not us. We are not encouraging independence."

On May 5 of this year, the State Department created a new version of the U.S.-Taiwan relations fact sheet. In this new version, reference to the 1979 joint communique has been greatly diminished in a statement that simply points out that the U.S. 'one China' policy is "guided by the Taiwan Relations Act, the three U.S.-China Joint Communiques, and the Six Assurances."

A sentence that had stated the U.S. "does not support Taiwan independence" has been completely removed. A new sentence has been added that acknowledges that although the U.S. does not have diplomatic relations with Taiwan, "we have a robust unofficial relationship as well as an abiding interest in maintaining peace and stability in the Taiwan Strait."

It is not immediately clear if these modifications represent a change in the U.S. 'one China' policy and stance on Taiwan's sovereignty. The State Department has yet to respond to a request for comment on the fact sheet changes.