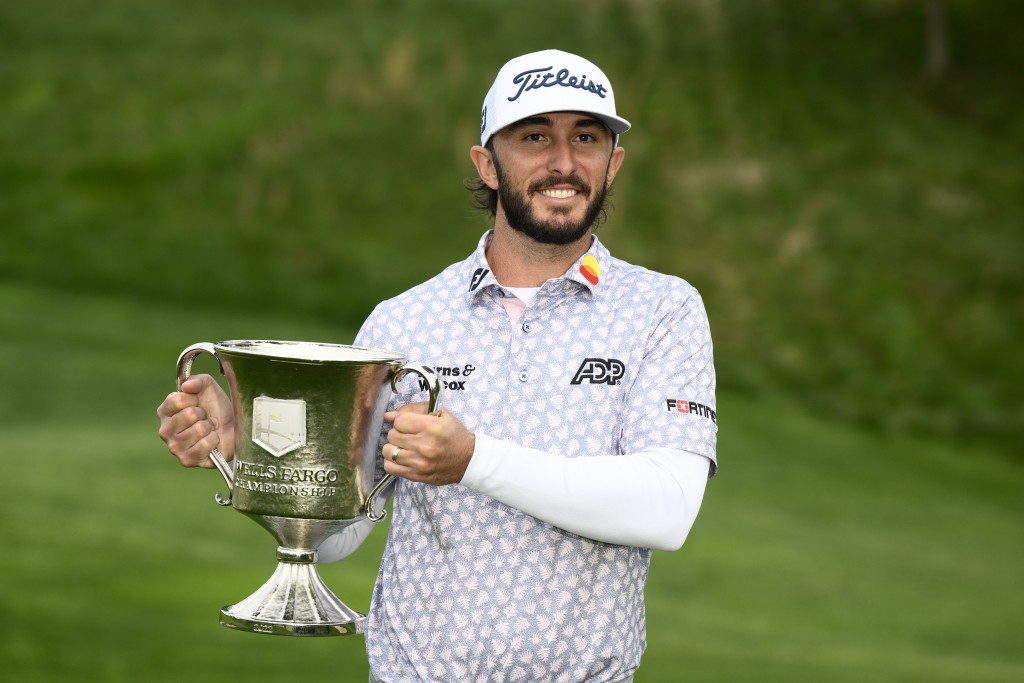 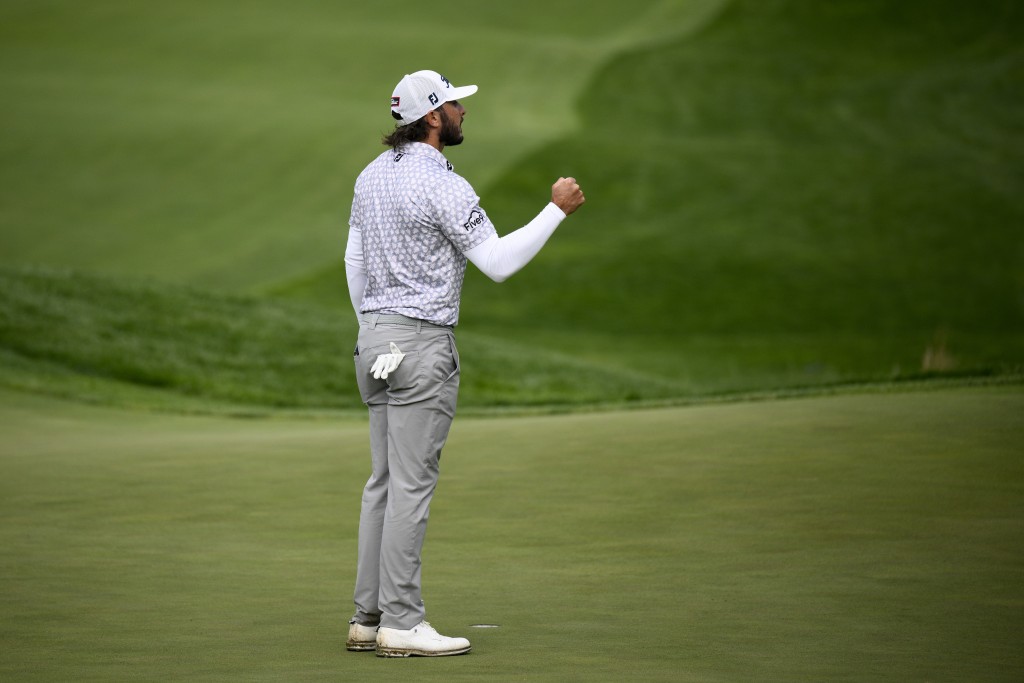 POTOMAC, Md. (AP) — Max Homa played solid, steady golf during a week of cold, wet conditions and a back-and-forth Sunday duel with Keegan Bradley, closing with a 2-under 68 for a two-shot victory in the Wells Fargo Championship.

Homa, who finished at 8-under 272 at TPC Potomac at Avenel Farm, won for the fourth time in his career and third time in the last 15 months.

Homa, who also won the season opener in Napa, California, joins Scottie Scheffler (four), Hideki Matsuyama (two), Sam Burns (two) and Cameron Smith (two) as multiple winners on tour this season. He moves to No. 6 in the Presidents Cup for the September matches at Quail Hollow.

Homa got his first career win in 2019 at Quail Hollow, which took the year off as Wells Fargo host because of the Presidents Cup. TPC Potomac, which last held a tour event in 2018, filled in ably despite torrential rain on Friday and Saturday and unseasonably cold temperatures most of the week.

Bradley started the day with a two-shot lead, gave it away on the par-5 second hole and took it back on the par-4 eighth before Homa finally took command for good on the back nine.

Rory McIlroy, who began the day six shots off the lead, was 3 under through 10 holes. He stalled from there and closed with a bogey for a 68 to finish alone in fifth, four shots back.

Olesen closed with a 1-over 73 to finish a stroke ahead of Sweden’s Sebastian Soderberg (68) at The Belfry. South Africa’s Justin Walters (71) and Scottish pair Connor Syme (70) and Richie Ramsay (71) shared a three-way tie for third.

Olesen had taken a three-stroke lead into the final round but struggled Sunday before his brilliant finish, making a 30-foot eagle putt on the 17th and winning with a 35-foot birdie putt.

The Dane was suspended by the European tour in 2019 after being accused of sexually assaulting a woman and being intoxicated on a flight following a World Golf Championships event in Tennessee.

Olesen was acquitted by a court in December after saying he had no memory of his behavior because he had been drinking alcohol and taking sleeping tablets. He said the case had a “devastating impact” on his career after playing in the Ryder Cup in 2018.

DULUTH, Ga. (AP) — Steve Flesch rallied from four shots behind with a 7-under 65 for a one-shot victory in the Mitsubishi Electric Classic, his second title at the TPC Sugarloaf.

Flesch also won this tournament in 2018, his only other win on the PGA Tour Champions.

David Toms had a two-shot lead on the back nine when he missed a 6-foot birdie putt on the 13th and then a 6-footer for par on the 14th. Needing a birdie to force a playoff, Toms had a hybrid for his second shot on the par-5 18th and then chose to lay up.

Toms finished one shot behind along with Padraig Harrington (64) and Fred Couples, who birdied the last hole for a 66. Harrington had a 7-foot birdie putt on the final hole that missed.

COLLEGE GROVE, Tenn. (AP) — Brent Grant birdied the par-5 18th hole for a 3-under 69 and a one-shot victory over Kevin Yu, his first Korn Ferry Tour title at the Simmons Bank Open.

Grant, a Honolulu native who played college golf for BYU-Hawaii, had a one-shot lead until a bogey on the 17th hole at The Grove. He made up for it with his birdie on the final hole.

Grant finished at 16-under 272 and moved to No. 12 on the points list. The top 25 players at the end of the regular season earn PGA Tour cards.

Yu, who started the final round with a one-shot lead, closed with a 71. He did not make birdie on any of the four par 5s.

Zack Fischer and Vincent Norrman of Sweden each shot 67 and tied for third.

Bio Kim closed with a 1-over 72 and won the CS Caltex Maekyung Open by two shots over Mingyu Cho. Kim won for the seventh time worldwide and claimed his first title on the Asian Tour. ... Miyuu Yamashita capped off a wire-to-wire victory with a 1-under 71 for a three-shot victory over Serena Aoki in the World Ladies Championship Salonpas Cup, a major on the Japan LPGA. ... Spanish rookie Ana Pelaez captured her first Ladies European Tour title by closed with a 6-under 66 for a six-shot victory in the Comunidad de Madrid Ladies Open. ... Austin Bautista secured his first professional win with a 2-under 69 for a seven-shot victory in the NT PGA Championship on the PGA Tour of Australasia. ... Manav Shah closed with a 6-undeer 66 for a two-shot victory over Joel Thelen in the Quito Open on the PGA Tour Latinoamerica. ... A-yeon Jo had a 5-under 67 and won the Kyochon Honey Ladies Open by four shots on the Korean LPGA.