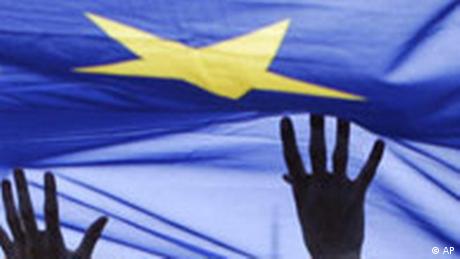 At first sight, Annemie De Clerck and Krasimir Zlatinov do not seem to have much in common.

De Clerck is a 62-year-old Belgian woman, newly retired, who used to be responsible for educational matters at the Diocese of Ghent. Zlatinov, 29, lives more than 2,000 kilometers southeast of the Belgian city, in the Bulgarian capital Sofia. He earned a master's degree in European finance from the universities of Sofia and Nottingham, UK.

But there are a few things that do unite the two: They are both citizens of the European Union (EU) — a bloc that brings together 450 million people in 27 countries — and both participated in a new format called the Conference on the Future of Europe.

After one year of plenaries, panels and working groups, which took place both digitally and in person, the conference is now coming to an end. Over the course of the past 12 months, Zlatinov, De Clerck and hundreds of other EU citizens from all over the bloc met several times with representatives of the European Parliament, the European Commission and the EU Council, which represents the member states.

When the project kicked off in May 2021, the goal was to give ordinary citizens more weight and to listen to their ideas for Europe's future. The participants were divided into different groups and instructed to work on topics such as migration, the rule of law, climate change, health and digital transformation.

The citizens came up with 325 proposals they would like the EU to implement in the years to come. Ideas range from more transparency over faster internet connections to minimum standards for the quality of food products.

Some of the recommendations, however, would require the bloc to completely overhaul the way agreements are currently struck. For example, one would entail getting rid of unanimous decisions on foreign policy or tax issues. In the end, that would mean the EU would have to change its treaties, which could prove to be a very complicated process.

De Clerck: 'EU institutions are far away from our daily lives'

The participants were chosen randomly and De Clerck told DW that she was very surprised to be asked: "The EU institutions are so far away from our daily lives." But: "I thought it might be an opportunity to learn more about Europe and to some extent influence its future."

The Belgian was part of the working group on democracy. Even if the participants did not always share the same opinions — due to political and historical differences — they all agreed on one issue, De Clerck said: "Democracy must be very strong in each EU country. Only if this is the case, can we go out and defend our democratic lifestyle towards other nations."

The group Krasimir Zlatinov was assigned to focused on migration, a contentious issue within the EU as member states cannot agree on how to distribute migrants and refugees across the bloc. Zlatinov said this was a problem his group members would like the bloc to find a solution for. They also proposed better integration courses and easier access to the bloc's labor market.

One topic that was very close to Zlatinov's heart was the fact that working conditions are not equal in the bloc. He criticized the fact that his home country was experiencing a real brain drain, as many young people had left for western EU states in search for better paid jobs.

Zlatinov: 'A wonderful time of my life'

The participants encountered a number of difficulties over the year, due — first and foremost — to the pandemic. But Zlatinov faced life-changing consequences when he lost his job. He told DW that his employer, a bank, had not wanted him to become a public figure who gave interviews and spoke in plenaries, and he was fired.

Nonetheless, he also said that it had been very important for him to take part in the Conference on the Future of Europe and even described the past year as "a wonderful time of my life."

De Clerck agreed, though she said that it was not always easy to talk with experienced politicians from EU institutions: "We worked together but they do this professionally and we are just ordinary citizens."

Both are confident that the project will change things for the better, make the bloc more transparent and bring it closer to its citizens.

Guy Verhofstadt, a former Belgian prime minister and lawmaker who chairs the conference for the European Parliament, agrees. Of course, the participants' proposals will have to be implemented, he told DW. "That is an engagement we have taken towards the citizens," he said.

The European Parliament made a first step this week by calling on the EU to rewrite its treaties. Any changes, however, would have to be agreed on by all member states.

The bloc's founding treaties have been revised several times in the past to adapt to new developments but the last time they were updated was in 2009 when the Lisbon Treaty entered into force. For now, it does not look as if there is a lot of appetite to change treaties, as there is no consensus among the states regarding this issue.

One thing is clear though: The end of the Conference on the Future of Europe is only a starting point for renewed discussions. De Clerck, Zlatinov and the others will present their recommendations to the presidents of the three EU institutions, including to French President Emmanuel Macron as France currently heads the EU Council, on May 9: Europe Day.

"EU politicians have promised us they will work on our proposals, so we see this as a first stage," De Clerck said. "We want to be informed about what's happening. And if things cannot be implemented they at least have to explain why."