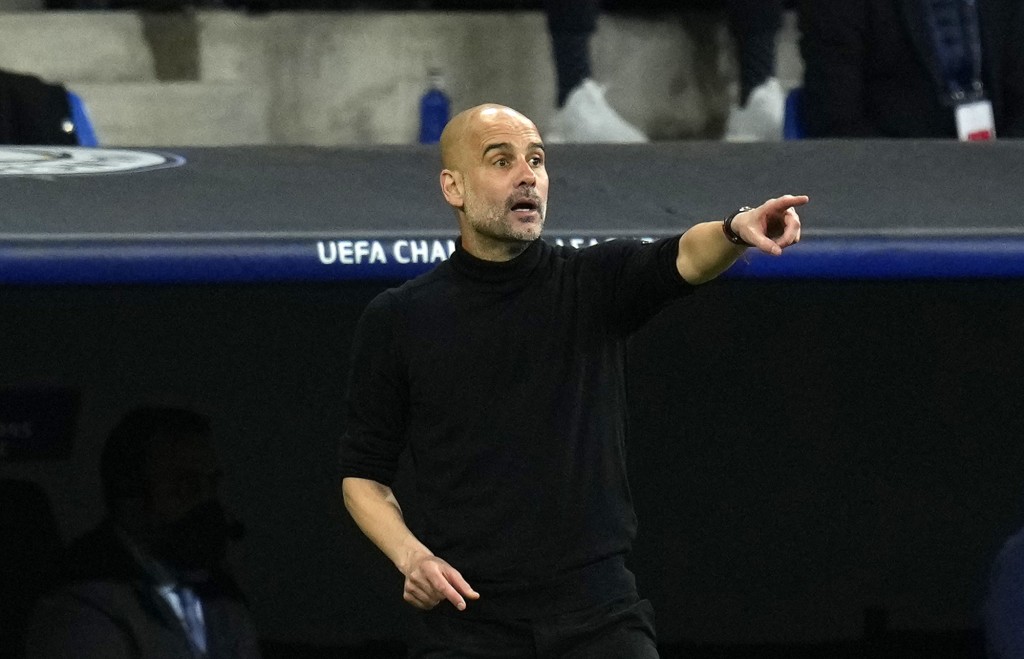 Manchester City can go three points clear at the top of the Premier League by beating Newcastle. It's a meeting of the team that has benefited from Abu Dhabi funding for 14 years against the visitor that has started to see investment flow from Saudi Arabia's sovereign wealth fund since last year. While this season was about Premier League survival rather than a first title since 1927, Newcastle will soon hope to be enjoying the successes Pep Guardiola's side has enjoyed. City is aiming for a sixth title since 2012 and the bid was helped by Liverpool being held by Tottenham to 1-1 on Saturday to only go top on goal difference, having played a game more. It's also a big day at the bottom of the standings, with third-to-last Everton having a chance to climb out of the relegation zone by beating Leicester. Leeds is two points above Everton heading into its match at fourth-placed Arsenal, which can move a point behind Chelsea in third. Already-relegated Norwich hosts West Ham in the other game.

Zlatan Ibrahimović is returning from injury just in time for AC Milan’s final push for the Serie A title. Ibrahimović, who has missed large swathes of the season, has managed late substitute appearances in Milan’s past two matches. The Rossoneri will be hoping he can play more of a part in the final three matches, starting at Hellas Verona. Milan travels to Verona a point behind city rival Inter Milan after the defending champion beat Empoli 4-2 on Friday. At the other end of the table, Salernitanta can take a potentially decisive step towards safety with a win over Cagliari in a relegation six-pointer. Salernitana has won four of its past five matches to move a point above Cagliari, which has replaced it in the bottom three. Bottom club Venezia could be consigned back to Serie B regardless of its result against Bologna, while Spezia hosts Atalanta.

Atlético Madrid hosts newly crowned champion Real Madrid while still trying to hold onto fourth place to qualify for the Champions League. Diego Simeone's side is three points ahead of Real Betis having played one game fewer. Real Madrid is preparing for the Champions League final against Liverpool in three weeks. Real Madrid manager Carlo Ancelotti plans to rest goalkeeper Thibaut Courtois and let backup Andriy Lunin add to his only two appearances of the season in the Copa del Rey. Third-placed Sevilla visits Villarreal also needing to lock up its Champions League spot for next season. It will be Villarreal’s first game since Liverpool ended its run to the Champions League semifinals. Unai Emery's side is fighting for a berth in the Europa League, which it won last season. Getafe also hosts Rayo Vallecano in a derby of Madrid’s modest clubs, while Osasuna is at Espanyol.

Leipzig aims to reclaim fourth place for Champions League qualification when it hosts Augsburg in the Bundesliga. Leipzig has lost its last three games in all competitions after a 15-game unbeaten run, but it can book its place in Europe’s premier competition if it wins its two remaining Bundesliga games. Augsburg is yet to ensure its safe, though it’s unlikely to be relegated. Stuttgart is in a bigger predicament in the relegation playoff place and could potentially still catch Augsburg by winning its last two games. The first is at newly crowned champion Bayern Munich, which feels obligated to put on a convincing performance after a lackluster defeat in Mainz last weekend and a much-criticized players’ trip to Ibiza. If Bayern beats Stuttgart, Augsburg will be safe before its game in Leipzig, as will Hertha Berlin. Eintracht Frankfurt hosts Borussia Mönchengladbach for an early game with only pride at stake.

Marseille has injury worries ahead of its trip to Lorient as it chases second place and automatic entry into next season's Champions League. Going far in European competition took its toll as key players Dimitri Payet and Arkadiusz Milik were both hurt in the European Conference League return leg against Feyenoord on Thursday night. Payet is out for the remaining three games with a torn calf muscle, while Milik took a blow to his thigh and is rated doubtful to face Lorient. Marseille needs a win to restore its three-point lead in second spot, currently held on goal difference by Monaco. Elsewhere, seven-time Golden Ball winner Lionel Messi is facing a late fitness test as champion Paris Saint-Germain hosts lowly Troyes.