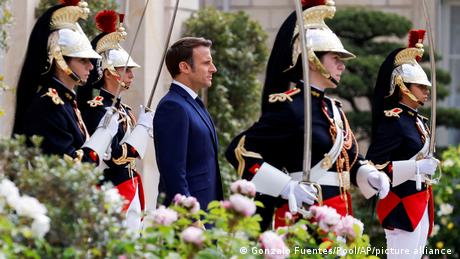 French President Emmanuel Macron was sworn into office for a second term on Saturday after his election victory over far-right rival Marine Le Pen.

Speaking at the investiture ceremony at the Elysee Palace in Paris, Macron promised to "first take action to avoid further escalation following Russia's aggression in Ukraine."

In his short speech to nearly 500 invited guests, the president spoke of the need to innovate at a time of unprecedented challenges for the world.

He said his second term would be "new" and not merely a continuation of his first five years in office.

Macron answered criticism from many voters,who say he came across as out of touch and arrogant during his first term. He promised to act with "respect" and "consideration."

"We will take action relentlessly with a goal, which is to be a more independent nation, to live better and to build our own French and European responses to the century's challenges," Macron added.

Macron's main domestic challenge will be the cost of living crisis amid plans to reform France's generous pensions system, raising the retirement age.

After his speech, Macron took his time to shake hands, exchange kisses and chat individually with scores of guests, including former Presidents Francois Hollande and Nicolas Sarkozy.

Macron was given the necklace of Grand Master of the Legion of Honor, France's highest distinction.

In a tradition dating back to the Middle Ages, 21 cannon shots were fired from the Invalides military memorial complex to celebrate the inauguration.

The 44-year-old centrist won the runoff election for the presidency a fortnight ago against the far-right nationalist Le Pen, whose popularity in pre-election polls failed to turn into votes.

His victory marks the first time in two decades that a French leader is serving a second term. Jacque Chirac was the last when he was reelected in 2002.

Legislative elections due next month

France is already gearing up for legislative polls in June, with the country's left-wing parties last week announcing a new alliancein hopes to curb Macron's powers.

Macron shortly expected to name a new prime minister in place of incumbent Jean Castex to lead a revamped government.

The French president will visit the European Parliament in Strasbourg for "Europe Day" on Monday, before heading to Berlin to meet German Chancellor Olaf Scholz.

His new 5-year term will formally begin on May 13.