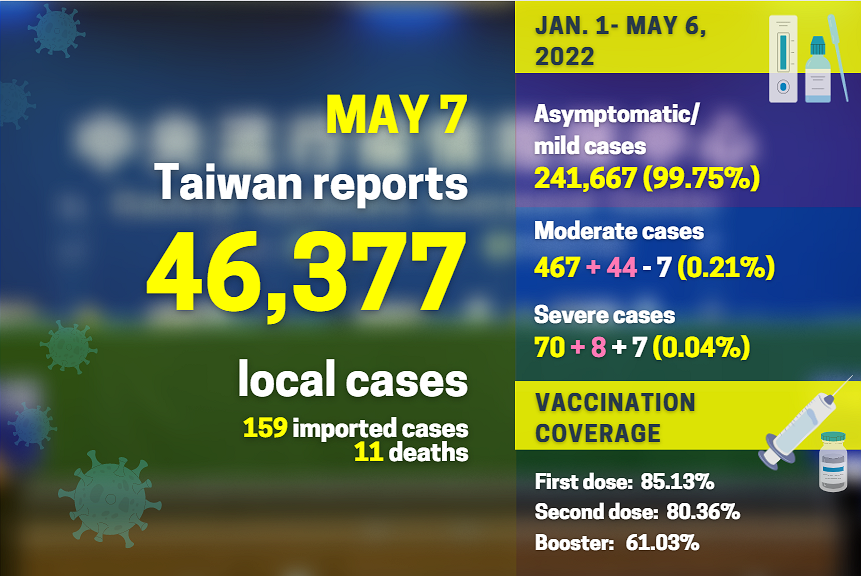 TAIPEI (Taiwan News) — Taiwan announced 46,377 local COVID-19 infections Saturday (May 7) as well as 159 imported cases and 11 deaths, taking the death tally to 907, according to the Central Epidemic Command Center (CECC).

The highest single-day total of local cases before Saturday had been the 36,168 infections reported Friday (May 6). CECC chief Chen Shih-chung (陳時中) has predicted the peak period for infections will last about two weeks instead of the six weeks forecast by some experts.

The 11 new deaths, one more than reported Friday, included seven male and four female local patients aged between 40 and 99 who had been listed as severe cases and suffering from chronic disease. They fell ill between April 24 and May 3 and died between April 30 and May 4.

The 159 new imported cases included 75 males and 84 females from under 5 to 89 years old who arrived in Taiwan between March 12 and May 6.

The new figures announced Saturday took Taiwan’s total number of coronavirus cases to 314,983, including 303,118 domestic cases and 11,811 imported ones. The 907 fatalities from the pandemic include 892 due to local infections, with New Taipei City registering 432 deaths and Taipei City 333.