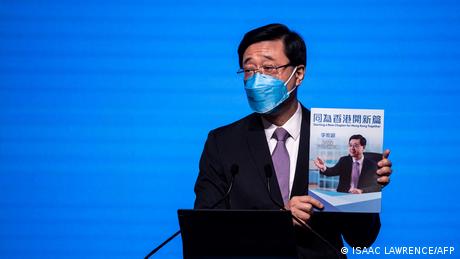 Around 1,500 members of Hong Kong's election committee are expected to cast their votes on Sunday to choose the next chief executive for the semi-autonomous Chinese city.

Hong Kong's former chief secretary John Lee is the only candidate on the ballot and critics warn the whole process is under the complete control of the Chinese government in Beijing.

The chief executive is elected for a term of five years by the members of the election committee, a body that's made up mostly of pro-Beijing figures, and the new leader is expected to take office on July 1.

"It is clearly not an election if we simply look at how many get to vote in the election," said Glacier Kwong, Hong Kong campaign coordinator for the Inter-Parliamentary Alliance on China (IPAC).

"They get to decide who is ruling the city and these people who get to vote are handpicked by Beijing after the reform of the electoral system last year," she told DW.

Despite the lack of competition, Lee still laid out his policy platform on April 29, which focused on enhancing Hong Kong's governance, increasing housing and maintaining the city's international status.

"In the long-term, it is how we make people realize the attractiveness and the competitiveness and the beauty of Hong Kong as a place they should come to work, to live and to develop," he said.

However, some experts doubt Lee's ability to fulfill the wide range of policy goals he presented last month, pointing to his lack of experience in handling any issues not related to security.

"He has very little experience with the policy issues other than police, security or by extension also national security," said Kenneth Chan, a political scientist at Hong Kong Baptist University.

'A reputation as a law enforcer'

While Lee is scheduled to hold a closed-door campaign rally for most members of the election committee on Friday, his attempt to engage with Hong Kong's youth and opposition has been less successful.

During a meeting with around 80 youth representatives on May 4, no representative from the pro-democracy camp or student councils showed up. As the former police and security chief, many people have expressed concern about the state of freedom and human rights in Hong Kong under his leadership.

Some critics point to Lee's role during the Hong Kong government's crackdown on the anti-extradition bill movement in 2019, in which thousands of people were arrested, and police were criticized for their excessive use of force against protesters.

"He has built a reputation as a tough guy and a law enforcer that would not like to listen to others' views, be accommodating, or be measured. Whatever tasks his superiors assign to him, he will get them done," Chan from Hong Kong Baptist University told DW.

Additionally, Lee also vowed to fulfill the constitutional responsibility of legislation under Article 23 of Hong Kong's Basic Law, which mandates that the city should enact its own set of regulations to ban any act of "treason, secession, sedition, or subversion" against the central government in Beijing.

"I think John Lee worries most people because of how he says he is going to push for Article 23 to be enacted in Hong Kong, while not talking about pushing for universal suffrage," said Kwong.

"These things make people think that he is only going to be Beijing's puppet and try to crack down on civil society and make sure there can be no democracy or freedom in Hong Kong," she added.

In an attempt to soften his "tough" public image, Lee said on Wednesday that young people arrested during the protest should be given a second chance after completing their jail terms.

"For those who have offended, and have already served their time and completed their legal responsibility, we should absolutely give them the opportunity to re-enter society and contribute to society," Lee said on Wednesday.

A former British colony, Hong Kong is unlike other cities in China. When it was returned to China in 1997, the Sino-British Joint Declaration gave the territory a high level of freedom and autonomy. These priviledges have however been gradually eroded following two big protest movements in 2014 and 2019.

Beijing accelerated the pace of its crackdown on Hong Kong by introducing a controversial National Security Law, which criminalizes acts of sedition, subversion, collusion and terrorism. More than 100 people have been arrested under the law so far, and several pro-democracy media outlets have been forced to close down.

Moving forward, Chan from Hong Kong Baptist University says the international community shouldn't expect any change for the better in terms of civil society, civil liberties, or freedom under John Lee's leadership, despite his efforts to reverse his public image.

"He's been trying very hard to improve his image by speaking more softly and deliberately with respect to free press, the opposition and democracy," he said.

"We all know that autocrats are pretty good at making those cosmetic changes but in essence, they won't change. In that sense, because of these cosmetic changes, they are more determined to implement those tough measures against Hong Kong's civil society," he added.

Kwong expects Lee to keep enforcing the National Security Law that was implemented in 2020 while continuing the crackdown on freedom of speech. Over the last two years, several pro-democracy media outlets have been forced to shut down following mass arrests of their staff. "He probably will arrest more people under the law while cracking down on the media even more," she told DW.

"The Hong Kong Foreign Correspondents' Club's decision to suspend the Human Rights Press Award is another indicator. He will push for more national security-related legislation, and Article 23 is definitely going to be something that he'll push for," she added.

Chan added that Beijing wants people in Hong Kong and the rest of the world to know that the city's priority will be all about stability and security through John Lee's sole candidacy.

"Xi Jinping is seeking his third term this fall, so having a loyal, obedient, and tough person like John Lee would also provide a sense of security as far as his ambition is concerned," said Chan.

Apart from the shrinking space for civil society, Lee will inherit an economy that has been weakened following the imposition of strict pandemic control measures over the last two years.

As Hong Kong's business community continues to press the authorities to end the strict border control, which has essentially isolated Hong Kong from the rest of the world, Lee said he would make reopening the city's borders with China and the rest of the world a priority, according to the Hong Kong-based South China Morning Post (SCMP).

"We need to be proactive in keeping Hong Kong connected with the world and the mainland," SCMP quoted Lee in its report. However, political scientist Chan says Lee is still more likely to prioritize issues related to China over the city's international dimension.

"I believe John Lee will emphasize how to make Hong Kong instrumental to Beijing's great ambitions and plans and try to integrate Hong Kong with the Greater Bay Area, which consists of Hong Kong, Macau and cities in China's Guangdong province," Chan said.

"He would like to pay lip service to the international dimensions of Hong Kong, but obviously, he hasn't thought much about that."

In his policy statement released on April 29, Lee promised to organize more opportunities for young people in Hong Kong to work in China, as well as to attract aspiring young people to serve in the government. "He is only talking about following China's footsteps and enhancing national security," said Kwong.