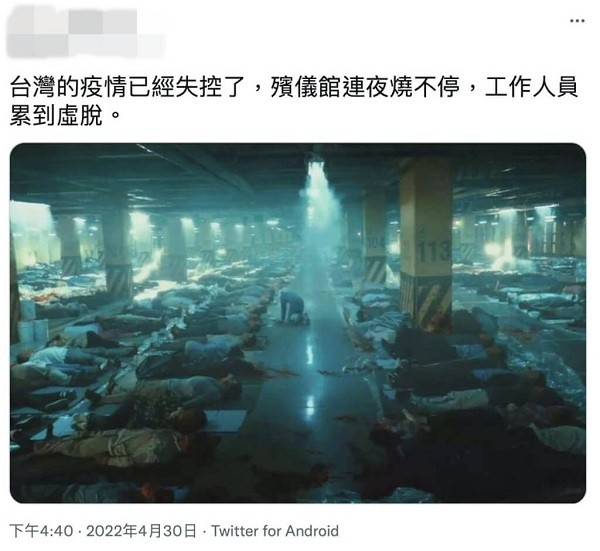 TAIPEI (Taiwan News) — A fake Twitter post claiming that Taiwanese crematoriums are burning bodies nonstop included a grotesque photo of a basement full of dead human bodies that was taken from a South Korean disaster movie, Taiwan’s Ministry of Justice Investigation Bureau (MJIB) said in a news release on Thursday (May 5).

However, according to Central Epidemic Command Center’s (CECC) statistics, five COVID-19 deaths is the highest recorded single-day death toll in Taiwan since the beginning of this year.

Noting that the post could mislead the public and cause panic, the MJIB said it conducted an investigation into the source of the photograph. According to the release, the photo was taken from the 2013 South Korean disaster movie, “The Flu”.

The undisclosed Twitter account that originated the fake news has used a different name in the past. It was changed to the current name after the user was accused of rumor-mongering, the release said.

However, the current Twitter account continues to post controversial, hyper-emotional, and untrue photos and captions about Taiwan’s current affairs, including politics, economics, people's livelihoods, and the COVID-19 situation.

The bureau warned that those spreading untrue information about the country’s COVID-19 situation could be held criminally responsible as specified in Article 14 of the Special Act for Prevention, Relief and Revitalization Measures for Severe Pneumonia with Novel Pathogens.