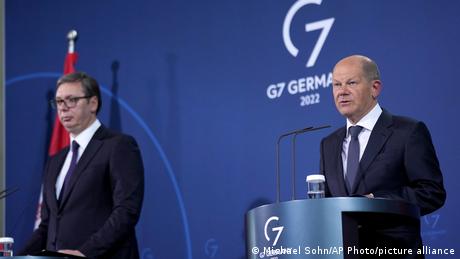 German Chancellor Olaf Scholz on Wednesday voiced his support for Serbia and Kosovo in their aspirations to join the European Union, as the leaders of both Balkan countries pledged to push forward with the necessary reforms required to do so.

Standing alongside Kurti, the German leader said, "The Western Balkans belong in Europe."

Later, alongside Vucic, Scholz said, "For Serbia, it is important that it continues its path of reforms and that includes on media freedom and fighting organized crime."

Scholz stressed that beyond the reforms each country needed to undertake, progress on the issue of rapprochement between the two was paramount, calling it "enormously important" to their membership aspirations.

"All open questions must be clarified in this dialogue," Scholz said, referring to issues between the neighbors.

Largely ethnic Albanian, Kosovo broke away from Serbia in 1999 before declaring independence in 2008. Though most EU member states recognize Kosovo's independence, Serbia does not and still claims it as its own territory.

After stressing the progress his country was making regarding rule of law reforms and fighting corruption, Kosovo's Kurti said Brussels, for its part, needed to make it easier for Kosovans to attain EU visas.

He also alluded to Russia's influence in the Balkans, calling it a threat to peace and security. He said that in the face of Moscow's actions, Kosovo saw no alternative but to join the EU and NATO to secure its future.

Moscow's invasion of Ukraine and its suspected exploitation of unresolved conflicts in the Balkans to foster anti-European sentiment have in part motivated Berlin's push to bring countries in the region into the EU.

The invasion has put Serbia, for instance, in a difficult position. While it has condemned Russia's invasion, its historical religious, ethnic and political ties with Moscow have kept it from signing on to sanctions.

Still, Vucic was clear about where he sees Serbia's future when speaking in Berlin: "It is Serbia's choice to be on the European path and Serbia is fully committed to that. Disregarding opinion polls which show that it [the EU path] is not the most popular, Serbia's leadership will support that path."

Vucic also spoke of his willingness to reach a compromise with Kosovo to facilitate that aim, saying he would do everything in his power to achieve it.

Scholz announced Wednesday that he will travel to the Balkans later this year for talks with leaders from Albania, Bosnia-Herzegovina, Montenegro and North Macedonia, as well as with Serbia and Kosovo.

He said he will also be inviting Western Balkan leaders to participate in talks on regional cooperation.

"In the future," said Scholz, "all its countries must belong to the European Union."