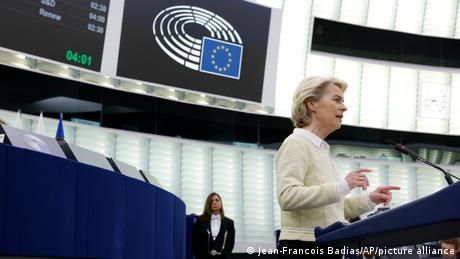 European Union countries would stop importing Russian oil and refined products under a proposal presented Wednesday by European Commission President Ursula von der Leyen. The ban would be part of the EU's sixth package of sanctions targeting Moscow for its war in Ukraine.

"We will phase out the Russian supply of crude oil within six months and refined products by the end of the year," von der Leyen told the European Parliament in Strasbourg on Wednesday amid applause from lawmakers.

"This will be a complete import ban on all Russian oil, seaborne and pipeline, crude and refined," she added.

The proposal requires approval from all 27 EU member countries to come into effect and is likely to trigger a substantial debate.

"It will not be easy. Some member states are strongly dependent on Russian oil. But we simply have to work on it," von der Leyen said.

The EU chief said that the phasing out of Russian oil will be done in an "orderly fashion" and in a way that allows the EU and its partners to secure "alternative supply routes and minimizes the impact on global markets.''

About 25% of the EU's oil comes from Russia and most of it goes toward gasoline and diesel for vehicles.

What other sanctions are in the new EU plan?

Russian military officials accused of committing atrocities in Ukraine's Bucha and Mariupol will also be targeted with sanctions.

"This sends another important signal to all perpetrators of the Kremlin's war: We know who you are, and you will be held accountable," von der Leyen said.

"We have identified these TV channels as mouthpieces, that amplify Putin's lies and propaganda aggressively," von der Leyen said, referring to the Russian president.

Moreover, accountancy services and public relations firms will also be barred from doing business in Russia, she added.

"The Kremlin relies on accountants, consultants and spin-doctors from Europe. And this will now stop," she said.

Some in EU question use of additional sanctions

"We don't see any plan or guarantee on how even a transition could be managed on the basis of the current proposals and what would guarantee Hungary's energy security," the Hungarian government's press office said in a statement sent to the AFP news agency.

Czech Industry and Trade Minister Jozef Sikela was also critical of the details o the ban, saying it lacked a burden-sharing mechanism.

The proposal does not include ... how the gap will be distributed, meaning how to share it fairly, and a proposal on joint purchases and joint distribution," Sikela told Reuters news agency. "We are still studying it, but it is a problem for me."