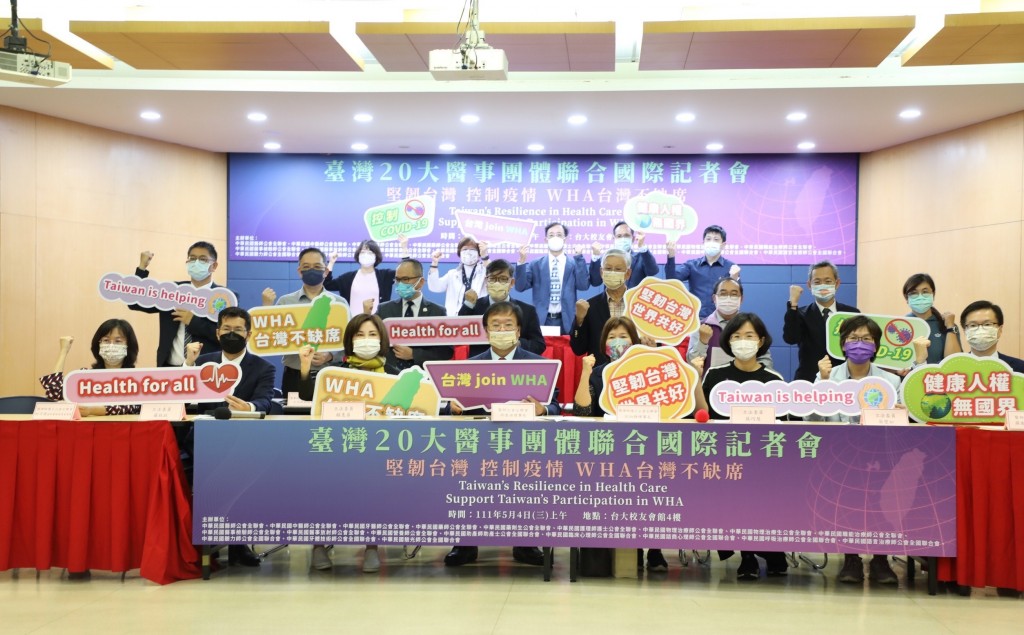 TAIPEI (Taiwan News) — Dr. Tai-Yuan Chiu (邱泰源), president of the Taiwan Medical Association (TMA), called on the world to back Taiwan’s participation in the World Health Organization (WHO) during an international press conference of 20 major Taiwanese healthcare associations on Wednesday (May 4).

Chiu pointed out that Taiwan has been sharing its medical technology and COVID-19 epidemic prevention strategy with other countries and is willing to help those in need. However, Taiwan’s requests to attend WHO technical meetings were denied due to “political interference” from China between 2017 and 2021.

Chiu urged WHO member states to respect the health body’s founding documents regarding the issue of Taiwan’s entry, according to a TMA press release.

The TMA president said that all members of Taiwan’s 20 major healthcare groups worked closely under the leadership of President Tsai Ing-wen (蔡英文) to boost COVID-19 vaccination coverage and provide comprehensive health services. The associations are committed to safeguarding the health of 23 million Taiwanese, he added.

The WMA sent a letter on April 19 to WHO Director General Tedros Adhanom Ghebreyesus that reminded him that “it is now more than ever necessary to open the doors of the United Nations bodies, especially the World Health Organization.” The WMA appealed to Ghebreyesus to support Taiwan and grant the nation observer status to the World Health Assembly.

The letter reiterated that “health is a basic human right” and urged the WHO to “harness collaboration by breaking political barriers.”

Taiwan participated in the WHA as an observer from 2009 to 2016. However, since 2017, it has been blocked from attending the global health meeting due to Chinese pressure.

Despite this, international support for Taiwan’s participation in WHO-affiliated meetings has been growing in recent years. In 2021, leaders of 28 countries spoke up in favor of Taiwan joining that year's WHA.

U.S. Deputy Secretary of State for Management and Resources Brian McKeon urged Taiwan’s observer status in the WHA during a meeting with Ghebreyesus on April 8 of this year.