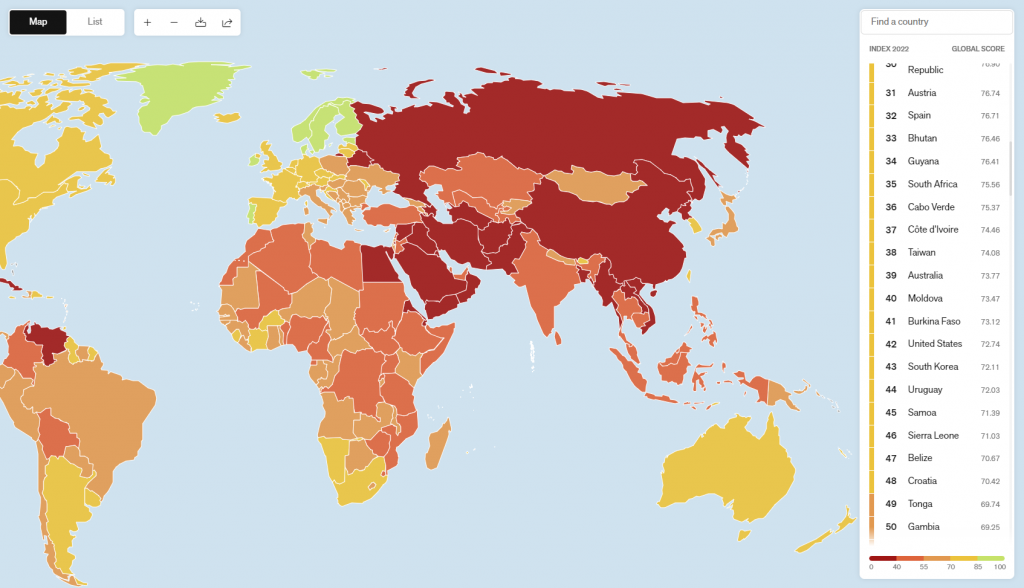 In its report, RSF described Taiwan as a liberal democracy “that generally respects the principles of media freedom.” The report highlighted the rich media environment with around 600 television and radio broadcasters as well as several major issues.

From a political perspective, Taiwan’s media landscape is free but “impaired by a strong political polarization, undeclared advertising, sensationalism, and the pursuit of profit,” according to RSF. This prevents citizens from accessing objective information.

RSF added that “the structural weaknesses of the Taiwanese media (make) them particularly vulnerable to disinformation attacks, especially by the Chinese regime.” It cited a 2021 Reuters Institute survey as saying that with a trust rate of only 33%, Taiwanese are among the least trustful of their media among the world’s democracies.

Additionally, journalists face pressure from their boardrooms “and cannot rely on effective legal protection to refuse unethical journalistic demands,” something that the government has failed to address. Media entities are thus unable to raise the quality of public debate, journalists have become targets of lawsuits or verbal attacks, and some politicians even “publicly disparaged the media,” RSF wrote.

Taiwan is ranked fourth in the Asia-Pacific region, behind New Zealand (11th in the world), Timor-Leste (17th), and Bhutan (33rd). The region, which holds more than half of the world’s population, has been gripped by “absolute and autocratic control of information,” wrote RSF, highlighting Hong Kong as the region that saw the steepest drop in ranking (68 places) after China took control.

“Once a bastion of press freedom,” Hong Kong now has a government that answers directly to Beijing and openly supports policies of censorship and propaganda. Meanwhile, with over 120 journalists currently detained, China has been labeled “the world’s largest prison for journalists” and a place where “freely accessing information has become a crime and to provide information an even greater crime.”

In the 2022 edition of the index, Hong Kong ranks 148th, while China ranks 175th. North Korea ranks as the worst country for press freedom (180th place).