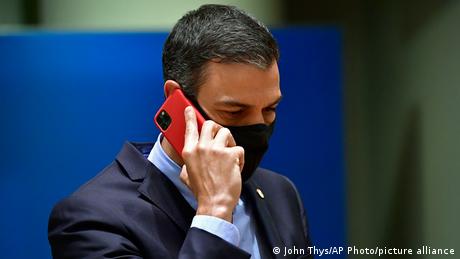 Pegasus spyware infiltrates mobile phones to extract data or activate a camera or microphone to spy on their owners. It was developed by Israeli-based company NSO, which claims that it only sells its software to government agencies to target criminals and terrorists.

NSO has been criticized by global rights groups for violating user's privacy. It also faces lawsuits from major tech firms such as Apple and Microsoft.

Presidential Minister Felix Bolanos said that Sanchez's phone was tapped in May 2021 and Robles' in June 2021. The phones in question were work phones provided by the state.

What do we know about the hacking?

Bolanos said that the mobile phones of all members of the cabinet would be investigated to see if they were also tapped.

"It is not an assumption, these are facts of enormous gravity," Bolanos said.

"We are absolutely certain that it was an external attack... because in Spain, in a democracy like ours, all such interventions are carried out by official bodies and with judicial authorization," he said. Bolanos did not say which country or entity the attack may have originated in.

Bolanos said that a "certain amount of data" was extracted from both phones.

The El Pais newspaper said that the hackers extracted 2.6 gigabytes of information from Sanchez's phone and nine megabytes from Robles' phone. It added that the government does not know the nature of the stolen information and the degree of sensitivity.

Sanchez's and Robles' phones were examined after Basque and Catalan pro-independence politicians alleged their phones had been hacked using Pegasus and accused Spain's intelligence services of carrying out the hacking.

President of the autonomous region of Catalonia and member of the center-left pro-independence Catalan Republican Left (ERC), Pere Aragones, denounced what he called a "double standard" in the central government's attitude toward spying. "Against the independence movement anything is permitted," he said.

ERC leader Oriol Junqueras alleged that the hacking of Sanchez and Roldes' phones "could be a smoke screen for [the central government] to dilute its responsibility" in the spying of pro-independence politicians. Junqueras accused Spain's central government of carrying out a "massive and illegal" spying campaign of the Catalan independence movement.