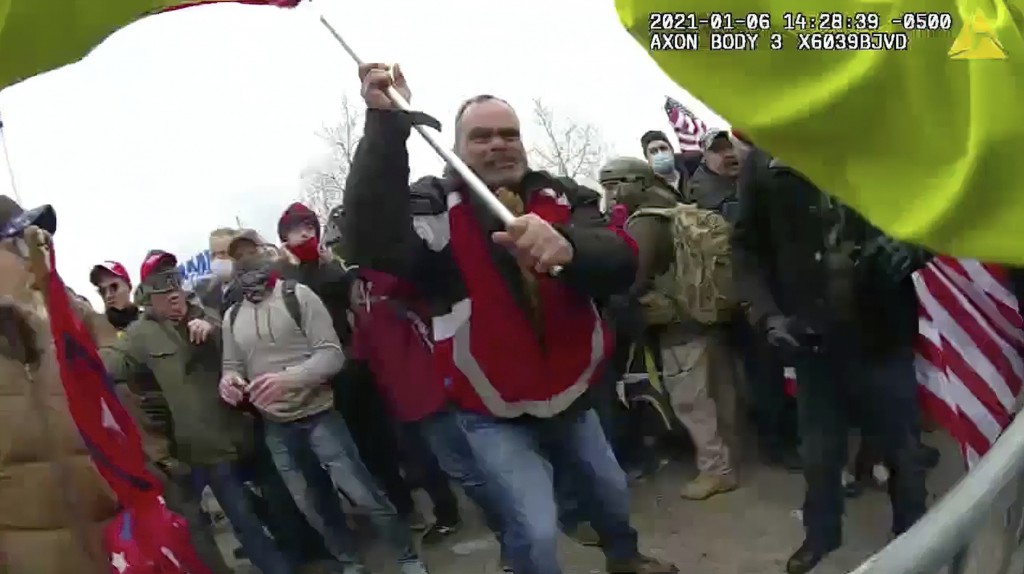 WASHINGTON (AP) — A federal jury on Monday convicted a New York Police Department veteran of assaulting an officer during the U.S. Capitol riot, rejecting his claim that he was defending himself when he tackled the officer and grabbed his gas mask.

Thomas Webster, a 20-year NYPD veteran, was the first Capitol riot defendant to be tried on an assault charge and the first to present a jury with a self-defense argument.

Jurors deliberated for less than three hours before they convicted Webster of all six counts in his indictment, including a charge that he assaulted Metropolitan Police Department officer Noah Rathbun with a dangerous weapon, a metal flagpole. The assault charge alone is punishable by up to 20 years in prison, although sentencing guidelines likely will recommend a significantly shorter prison term.

Webster, 56, testified that he was trying to protect himself from a “rogue cop” who punched him in the face. He also accused Rathbun of instigating the confrontation.

Rathbun testified that he didn’t punch or pick a fight with Webster as a violent mob attacked the Capitol on Jan. 6, 2021, disrupting Congress from certifying Joe Biden’s 2020 presidential election victory over then-President Donald Trump.

“I guess we were all surprised that he would even make that defense argument," said a juror who spoke on condition of anonymity. “There was no dissention among us at all. We unanimously agreed that there was no self-defense argument here at all.”

Webster’s jury trial was the fourth for a Capitol riot case. The first three defendants to get a jury trial also were convicted of all charges in their respective indictments. A judge decided two other cases without a jury, acquitting one of the defendants and partially acquitting the other.

Webster, who wore a mask in court, showed no obvious reaction to the verdict.

“We're disappointed,” defense attorney James Monroe said after the verdict, “but we recognized from the beginning that folks here (in Washington, D.C.) were quite traumatized by what transpired on Jan. 6. And I think we saw some of this expressed today.”

Prosecutors asked for Webster to be detained, but the judge agreed to let him remain free until his sentencing. He'll continue to be monitored with an ankle bracelet. The judge said it was a "close call” whether to jail him immediately but noted that he has complied with current conditions of release and doesn’t have any prior convictions.

Webster drove alone to Washington from his home near Goshen, New York, on the eve of the Jan. 6 “Stop the Steal” rally. He was wearing a bulletproof vest and carrying a U.S. Marine Corps flag on a metal pole when he approached the Capitol, after listening to Trump address thousands of supporters.

Webster said he went to the Capitol to “petition” lawmakers to “relook” at the results of the 2020 presidential election. But he testified that he didn’t intend to interfere with Congress’ joint session to certify the Electoral College vote.

Rathbun’s body camera captured Webster shouting profanities and insults before they made any physical contact. Webster said he was attending his first political protest as a civilian and expressing his free speech rights when he yelled at officers behind a row of bike racks.

The body camera video shows that Webster slammed one of the bike racks at Rathbun before the officer reached out with an open left hand and struck the right side of Webster’s face. Webster said it felt as though he had been hit by a freight train.

“It was a hard hit, and all I wanted to do was defend myself,” Webster said.

Rathbun said he was trying to move Webster back from a security perimeter that he and other officers were struggling to maintain.

After Rathbun struck his face, Webster swung a metal flag pole at the officer in a downward chopping motion, striking a bike rack. Rathbun grabbed the broken pole from Webster, who charged at the officer, tackled him to the ground and grabbed his gas mask.

Rathbun testified that he started choking as the chin strap on his gas mask pressed against his throat. Webster said he grabbed Rathbun by the gas mask because he wanted the officer to see his hands.

Rathbun reported a hand injury from a separate encounter with a rioter inside the Capitol. He didn’t report any injuries caused by Webster, but jurors saw photos of leg bruises that Rathbun attributed to his confrontation with the retired officer.

Webster retired from the NYPD in 2011 after 20 years of service, which included a stint on then-Mayor Michael Bloomberg’s private security detail. He served in the U.S. Marine Corps from 1985 to 1989 before joining the NYPD in 1991.

Two other defendants testified at their trials. Dustin Byron Thompson, an Ohio man who was convicted by a jury of obstructing Congress from certifying Biden’s presidential victory, said he was following orders from Trump. A judge hearing testimony without a jury acquitted Matthew Martin, a New Mexico man who said outnumbered police officers allowed him and others to enter the Capitol through the Rotunda doors.

Two riot defendants didn’t testify at their trials before jurors convicted them of all charges, including interfering with officers. One of them, Thomas Robertson, was an off-duty police officer from Rocky Mount, Virginia. The other, Texas resident Guy Wesley Reffitt, also was convicted of storming the Capitol with a holstered handgun.