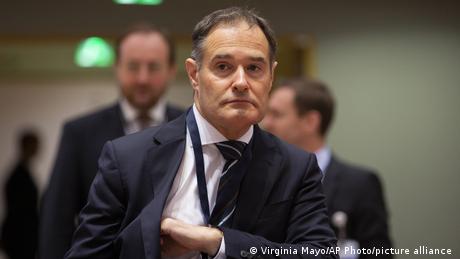 The head of Frontex has offered to resign following allegations that the European Border and Coast Guard Agency was involved in illegal pushbacks of migrants, EU and German officials said Friday.

Fabrice Leggeri, synonymous with impenetrable EU borders who was frequently accused of allowing unlawful pushbacks, has been under increasing pressure to step down in recent months.

"I can confirm that he has offered the board of Frontex his resignation," German Interior Ministry spokesperson Maximilian Kall told reporters in Berlin. Kall said replacing Leggeri offered an opportunity for a "fresh start" at Frontex.

"It offers the possibility of fully resolving the allegations, creating complete transparency and ensuring that all missions by Frontex occur in full conformity with European law,'' he said.

Pushbacks force would-be refugees away from a border before they are able to reach a country and claim asylum. The act is considered a violation of international refugee protection agreements, which state people shouldn't be expelled or returned to a country where they are in danger due to their race, religion, nationality or being members of a social or political group.

Leggeri has previously maintained his innocence, denying any wrongdoing.

Almost 1,000 pushed back in the Aegean Sea

In 2021, the European Parliament published its own report into allegations that the bloc's border agency was implicated in pushbacks, including in the Aegean Sea between Greece and Turkey.

According to a joint investigation this week by Lighthouse Reports, Der Spiegel, SRF Rundschau, Republik and Le Monde, Frontex has been involved in the pushbacks of at least 957 asylum-seekers in the Aegean Sea over an 18-month period between March 2020 and September 2021.

The EU's anti-fraud agency OLAF launched an investigation last year into allegations of human rights violations by Frontex. OLAF's report has yet to be made public.

Leggeri has led Frontex since January 2015, directing the agency during the European migrant crisis in his first year at the helm, when more than 1.3 million refugees applied for asylum in Europe according to the Pew Research Center.More than a third of those applying for asylum in Europe that year sought refuge in Germany.

Many were fleeing war in Syria, but there were also large numbers coming from Afghanistan, Nigeria, Pakistan, Iraq and elsewhere.