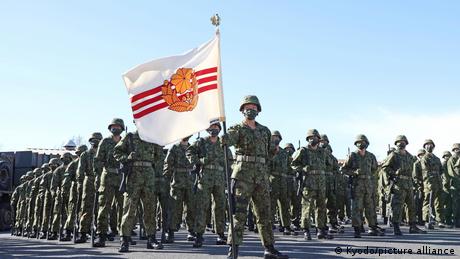 Speaking to Japanese MPs via videolink earlier this month, Ukrainian President Volodymyr Zelenskyy praised Japan for being the "first Asian nation that has begun exerting pressure on Russia." After all, the Japanese government has condemned Russia's invasion and gone along with most Western sanctions levied on the country.

The assets of Russia's central bank and other major Russian banks have been frozen, along with assets owned by 500 Russian individuals and organizations. Japan has banned the export of high-end technology to Russia and made it illegal to make new investments there.

Japan will revoke Russia's trade status as a so-called favored nation. In addition, the Asian nation wants to quickly forego Russian coal imports, but will not abandon a joint Russo-Japanese liquefied natural gas project in Siberia. 60 out of 168 Japanese companies operating in Russia have withdrawn from the country. Among them are carmaker Toyota and tech giant Sony.

Japan's swift and determined action regarding Russia shows the country seeks to become a leading actor in world politics. Indeed, Prime Minister Fumio Kishida hopes greater international standing will allow Japan to assert its political and economic interest. 64-year-old Kishida, who served as foreign minster between 20212 and 2017 and briefly as defense minister, seeks to close ranks with the US, its strategic partner.

At the same time, Japan yearns to graduate from the role of junior partner. "Japan will reorient its security policy given Russia's invasion of Ukraine," according to Japan expert Sebastian Maslow of Sendai Shirayuri Women's College.

Japan, which once placed pacifism at the center of its foreign policy, is adopting an ever more robust security stance. This gradual shift was initiated by former Prime Minister Shinzo Abe. It has entailed a reinterpretation of Article 9 of the Japanese Constitution which prohibits Japan from waging war and maintaining an army. Despite this, Abe has permitted the country's Japan Self-Defense Forces to aid international allies in case of a "severe threat."

If, for instance, a US warship was attacked, Japanese Self-Defense Forces could come to its protection. They have also been granted permission to embark on mine clearance missions in the Middle East to protect Japanese economic interests. Previous leaders had reject such "collective self-dense" as unconstitutional.

In light of Russia's war of aggression against Ukraine, Kishida and the conservative leadership aim to further erode the country's pacifist stance. Several days ago, members of the governing Liberal Democratic Party (LPD) proposed doubling Japan's defense budget to 2% of GDP within five years.

Former Prime Minster Abe backed the move. "All NATO countries have without exception declared they will grow their defense budget to 2% of GDP," Abe said last week at the Forum for Strategic Studies, adding that Japan would "make a fool of itself" if it didn't follow suit.

Thus far, Japan stuck to a threshold of 1% of GDP, in line with its defensive foreign and defense policy. "Aside from Putin's war, dangers posed by China and North Korea are being used to justify this defense spending surge," explains Maslow. According to the Stockholm International Peace Research Institute (SIPRI), Japan already grew its budget by 7,3% last year to $54,1 billion (€51,3 billion) — the greatest increase since 1972.

This policy shift could be codified later this year when Japan amends its national security strategy for the first time since 2013. Japan's Buddhist Komei, the LDP's junior coalition partner, has signaled it would oppose this step. Komei leader Natsuo Yamaguchi has said that the Japanese public would not "readily accept" a doubling of the defense budget if this meant cutting social welfare or raising taxes.

LDP security experts are calling for the introducing of weapons systems capable of countering enemy threats before they strike. Shinzo Abe previously also had called for Japan to develop counterstrike capabilities. This ability would, however, go against the country's constitutionally enshrined pacifism.

Speaking to US military publication Stars and Stripes, Tetsuo Kotani, a senior research fellow at the Japan Institute of International Affairs, explained the government's agenda: "We are trying to introduce counterstrike capabilities." He added that "we will rely on existing missile defense systems to intercept the first wave of missiles but after missile strikes start, we need to eliminate the missile launchers or runways in enemy territory to disrupt their operations." Japan currently operates Patriot and Aegis missile defense systems. To enhance its counterstrike capacity, it may allow the deployment of medium-range missile systems on Japanese territories, he said.

Japan does not, meanwhile, intend to abandon its pledge to shun nuclear weapons. While former Prime Minister Abe recently suggested US nuclear weapons could be station in Japan, as is the case in Germany, this idea was quickly dismissed by current Prime Minster Kishida. He said doing so would violate Japan's commitment to neither build, own nor station nuclear weapons.