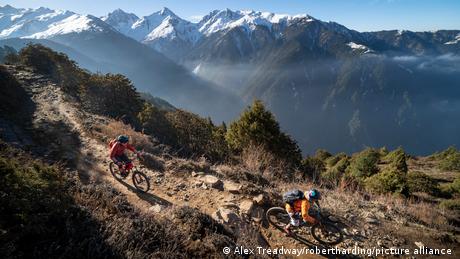 Tourists are returning to Nepal as the Himalayan country lifted pandemic travel restrictions after a steady drop in coronavirus cases.

Visitors can again take advantage of a visa-on-arrival program and no longer need to worry about a vaccine mandate in Nepal.

Nandini Lahe-Thapa, Director of Nepal Tourism Board (NTB), told DW that more tourists have arrived in Nepal since the beginning of this year than in all of 2021.

"This shows the tourism sector is reviving and recovering…people are feeling confident to travel," she said.

In 2019, Nepal had welcomed a total of 1.3 million foreign tourists arriving by plane. This doesn't include those arriving by land from India.

According to the Nepal Rastra Bank, the tourism sector provides employment for about 20% of Nepal's workforce and contributes to 3% of gross domestic product (GDP).

Mountaineers return to the Himalayas

Mountaineers and trekkers are leading the return. According to the Department of Tourism (DoT), over 870 foreign mountaineers have so far this year applied for permits to scale more than 20 of Nepal's Himalayan peaks during the spring season. Out of this, 300 were issued permits to scale Mt. Everest, most from the US and Europe.

More than 302 mountaineers are issued permits to scale Mt. Everest alone, majority of them are from the US and Europe.

As the flow of travelers increases, hotels and guest houses have filled up in the eastern Solukhumbu District, a prime starting point for many mountaineers and trekkers.

Ashok Pokharel, Chairman of Nepal Association of Tour Operators (NATO), told DW that most of the adventure tourists who have started visiting Nepal are young risk-takers.

"This is a natural rebound after the pandemic waned," he said. "The government and other stakeholders now should come up with a substantive plan as to how to restore the entire tourism and hospitality industry and sustain business."

The NTB said most of the tourists are from India, the United States, the United Kingdom, Germany and France.

Before the pandemic, China was a major source of tourism in Nepal, but strict pandemic measures keep tourism from China cut off. Prepandemic, there had been four direct flights from China.

Pokharel said that Nepal is working on enhancing tourism capacity and is ready to welcome Chinese travelers again.

Nepal's tourism and hospitality industry continues to face shortages as the majority of employees left the sector during the pandemic.

Many tour guides and service staff either changed their profession or left the country in search of work.

Thapa from the NTB said that the tourism sector is set to recover gradually as more workers return. However, people remained worried about a possible return of pandemic restrictions,

Stakeholders are worried about the consequences of the pandemic coupled with the ongoing Russia and Ukraine war on tourism sectors and its swift revival.

Director General of the DoI, Narayan Prasad Bhattarai told DW that number of arrivals slowed down recently reports of surging coronavirus cases in neighboring India. The economic impact of the war in Ukraine is also affecting global tourism.

"The war has dented hope of the swift revival of the tourism industry in near future as it has pushed up travel expenses and disrupted flight routes," he said.