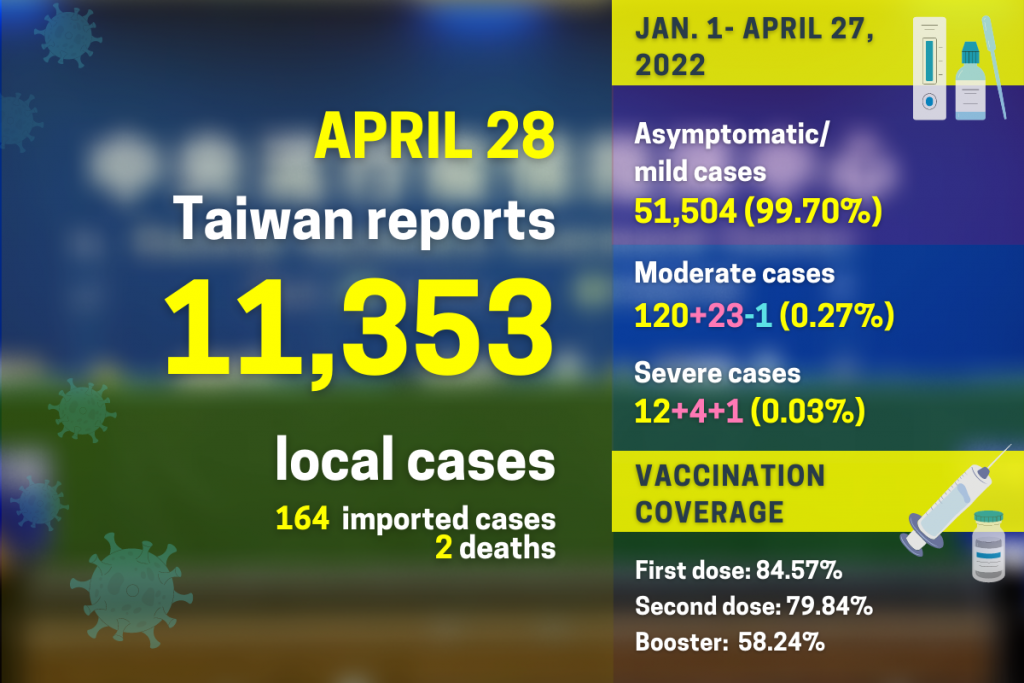 The local cases reported include 5,394 males, 5,957 females, and two cases under investigation ranging in age from under five to their 90s, with their dates of onset ranging from March 26 to April 27. Among Thursday's cases, 5,953 were asymptomatic.

The two deaths reported on Thursday include a man in his 70s, case No. 36928, and a woman in her 60s, case No. 40627. They both were diagnosed as severe cases and neither had received the COVID vaccine.

Case No. 36,928 began to experience symptoms of the virus such as a cough and fever on April 18 and was admitted to a hospital to undergo examination and treatment. He was diagnosed with COVID on April 19.

He had a history of chronic diseases and cancer. He was treated with Remdesivir and placed on a ventilator and died on April 22.

Case No. 40,627 was tested for COVID on April 19 because she had been listed as a contact of a confirmed case. On April 20, she collapsed while at home and was rushed to a nearby hospital. Her condition continued to deteriorate despite efforts by doctors to save her life and she was declared dead that day.

The 164 new imported cases include 80 males, 83 females, and one under investigation ranging in age from under five to their 70s. Of these, 115 tested positive upon arrival at the airport and 49 during quarantine.

They arrived between March 9 and April 27 from Indonesia (three cases), the Netherlands, and Vietnam. The countries of origin of 159 cases are still being investigated.

Up until now, 860 individuals have succumbed to the disease. Of the 845 deaths from local infections, 416 were in New Taipei; 322 in Taipei; 31 in Keelung; 28 in Taoyuan; 15 in Changhua County; 13 in Hsinchu County; five in Taichung; three each in Miaoli and Hualien counties; two in Yilan County; and one each in Hsinchu City, Nantou County, Yunlin County, Tainan City, Kaohsiung City, Pingtung County, and Taitung County. The 15 other deaths were imported cases.