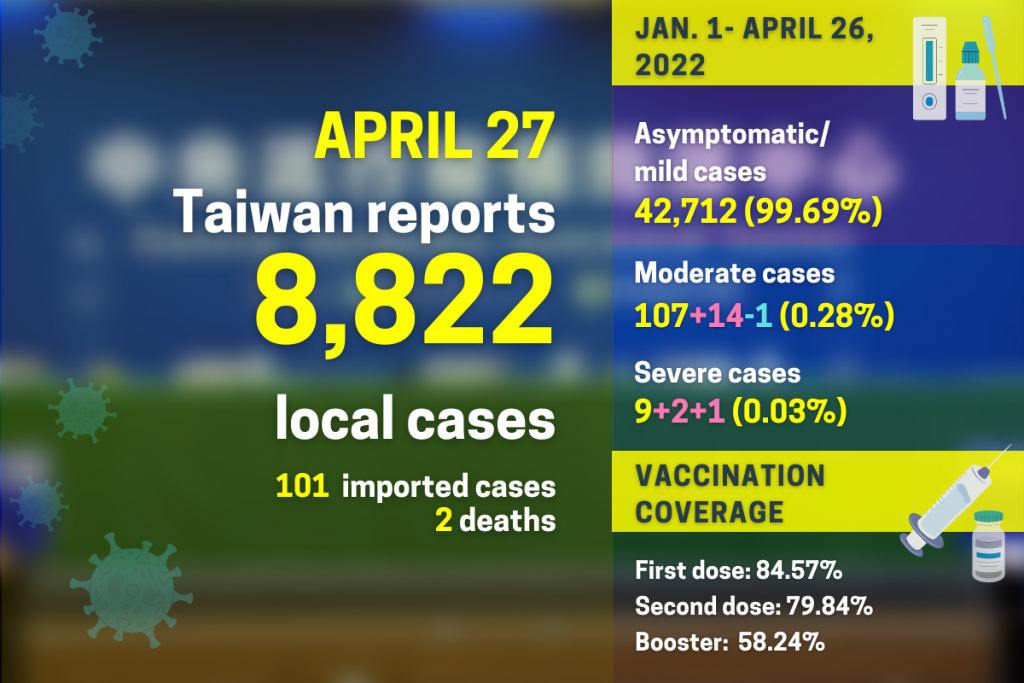 The local cases reported include 4,268 males, 4,551 females, and three cases under investigation ranging in age from under five to their 90s, with their dates of onset ranging from April 1-26. Among Wednesday's cases, 4,138 were asymptomatic.

Case No. 35,335 was an imported case with a history of chronic illnesses. He arrived in Taiwan from the U.S. on April 16 and returned home to undergo home quarantine after testing negative at the airport.

On April 17, he sought medical attention due to symptoms such as cough, runny nose, vomiting, and headache. After undergoing a medical examination, he opted to return home.

He was diagnosed with COVID on April 18 and on April 19 he was found by family members to have fallen unconscious and was rushed to a hospital. However, his condition worsened and doctors declared him dead that day.

The 101 new imported cases include 58 males and 43 females ranging in age from their teens to their 60s. Of these, 84 tested positive upon arrival at the airport and 17 during quarantine.

They arrived between March 31 and April 26 from Vietnam (12 cases), Spain, Indonesia, Australia, India, and the Philippines. The countries of origin of 82 cases are still being investigated.

A total of 217 people have been removed as confirmed cases, while 14 cases are still under investigation. Up until now, 858 individuals have succumbed to the disease.

Of the 843 deaths from local infections, 415 were in New Taipei; 322 in Taipei; 30 in Keelung; 28 in Taoyuan; 15 in Changhua County; 13 in Hsinchu County; five in Taichung; three each in Miaoli and Hualien counties; two in Yilan County; and one each in Hsinchu City, Nantou County, Yunlin County, Tainan City, Kaohsiung City, Pingtung County, and Taitung County. The 15 other deaths were imported cases.