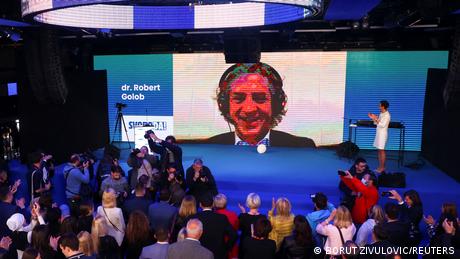 "The message of this election is clear: Voters said 'no' to the policy of the previous government," Tanja Staric, a political commentator and host on RTV Slovenia, told DW.

With almost all votes in Slovenia's parliamentary election now counted, it is clear that right-wing Prime Minister Janez Jansa has been defeated by newcomer Robert Golob and his liberal green Freedom Movement.

The outcome of the election came as a surprise to many experts, especially as the last opinion polls before the vote seemed to indicate that the country's two strongest parties were neck and neck. But things turned out very differently, with the Freedom Movement — a party that did not exist even six months ago — achieving a landmark victory.

Four other established parties will be represented in the next parliament: Janez Jansa's Slovenian Democratic Party (SDS) with 27 seats, the Christian Democrats (NSi) with eight, the Social Democrats with seven and The Left with five.

Although both the SDS and NSi — which were part of the previous coalition government — improved on their results from previous elections, it is clear that the electorate did not support their way of governing.

"It is a loss for all established political parties," said Tanja Staric. Although the opposition parties in the previous parliament focused their campaigns entirely on ending the coalition and forming a new government that would pursue new and different policies, the differences between the parties were not clear-cut.

Staric added that these parties paid a high price for dedicating two years to the goal of changing the government "because the votes of voters who opposed the current government went to the newcomer."

Lack of trust in the establishment

Staric said the result is "also a reminder that voters have big reservations about the establishment. But this is not something new. We have been monitoring for 10 years and more that voters are reluctant to trust political parties, the system and politics."

For political analyst Aljaz Pengov Bitenc, he believes the result is a clear rejection of two years of an increasingly authoritarian regime.

The analyst noted that the key generator of popular sentiment in Slovenia is still the issue of whether people are for or against Jansa. "In the last two weeks of the campaign, the opposition consistently pointed to the problems in Slovenia that this government will have to solve," he told DW.

Pengov Bitenc explained that voters "punished those who told them things were bad. At the same time, they acknowledged that things were bad and elected a messiah who is now supposed to solve things in one fell swoop."

The leader of the Freedom Movement is energy expert and former energy company executive Robert Golob, who became known to the Slovenian public last autumn following a dispute within the state-owned energy company he led. Tanja Staric points out that most of his team is still unknown.

In search of a savior for Slovenia

According to Pengov Bitenc, "Golob's party is a projection of this inversely messianic complex of the Slovenian nation, which is constantly looking for a messiah to solve all problems at once. We saw a similar situation with Miro Cerar in 2014."

Golob, who is in favor of green energy renewal, repeatedly emphasized in pre-election debates that Slovenia needs a new social contract. Staric said it is a crucial issue, but questioned whether it is implementable.

"Slovenian society as a whole is in an extremely poor state," Staric said.

"We do not have a basic social consensus on who we are and where we are going. What are the key issues of our future, what do we really want? The previous government wanted to transform society into an 'illiberal' democracy. The opposition has clearly opposed this and has other ideas. But we, as a society, must have a consensus on what is right and what is wrong. We don't have that."

Pengov Bitenc emphasized that while the result is good for democracy, it still came down to weighing two unfavorable options. "In fact, we chose between two bad options: an authoritarian government, on the one hand, or one of the economic and social austerity programs that we will have to go through if we want to put public finances in order."

He also feels that the other winners of this election are the people, democracy and civil society movements.

At almost 70%, turnout was one of the highest in the country's history. A lot of credit for this turnout goes to Slovenia's civil society movements, including the Research Institute of 8th March.

"It seems to me that this has shattered the myth of passive young people and Slovenes who don't care. This seems to me to be of incredible importance. It seems to me that common values ​​have been established: public education, public health, community, cooperation and solidarity," said Nika Kovac, director of the institute.

Kovac was targeted and attacked several times in recent months by supporters of Janez Jansa's government and has in the past received death threats.

"It's never been harder for me in my life than it has been for the last two months," she explained. "I was threatened. They insulted and attacked us, but something nice came out of every ugly thing."