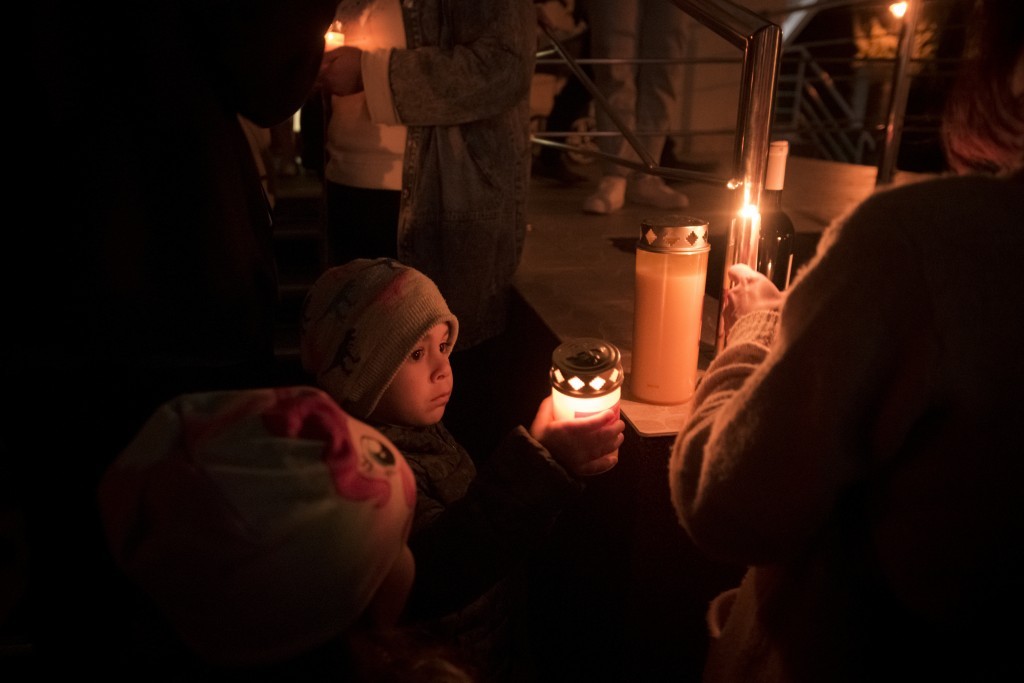 Ukrainian refugees filled churches across central Europe on Sunday for Orthodox Easter in bittersweet celebrations, giving thanks for escaping a Russian invasion but dreaming of a return home to family members left behind.

At Warsaw's Orthodox Cathedral of St. Mary Magdalene in the city centre where priests said holiday services were busier than in past years, children carried Easter baskets adorned with Ukrainian flags and had blue and yellow bows in their hair.

"This is my first Easter holiday that I am not spending in Ukraine...but fortunately there are a lot of people from Ukraine here," said Anna Janushevich, 35, who fled from Lviv.

"When the war is over I will go back to Ukraine. I dream that I will be able to return so that I can celebrate Easter at my home and that my daughter will be with her family."

More than 5 million Ukrainians have fled since Russia invaded on Feb. 24, with the majority seeking safety in the European Union through border crossings in Poland, Slovakia, Hungary and Romania.

Many of the refugees have chosen to wait out the war with friends and family in Poland whose pre-war Ukrainian community of around 1.5 million represented the region's largest.

Like many fellow churchgoers, Bohdana Dudka, 27, snapped photos to send home to family members including her two brothers who remained in Ukraine to fight.

"I hope the next Easter holiday will be at home in Ukraine," Dudka said. "I would like to thank the Poles for helping Ukrainians so much. We came with nothing and here people help each other."

As Ukrainians celebrated Orthodox Easter on Sunday, there was no end in sight to a war that has killed thousands, uprooted millions and reduced cities to rubble. read more

Moscow, which describes its actions in Ukraine as a "special military operation" to demilitarise its neighbour, denies targeting civilians and rejects what Ukraine says is evidence of atrocities, saying Kyiv staged them.

Inside Ukraine, subdued Easter celebrations took place across the country as President Volodymyr Zelenskiy vowed in an Orthodox Easter message that no "wickedness" would destroy the country.

In Prague, which boasted a pre-war Ukrainian community of nearly 200,000, Nataliya Krasnopolskaia said she began attending services regularly at the Cathedral Church of Sts Cyril and Methodius since arriving from Odesa on March 6.

"In Ukraine I only go for the holidays but in Prague I try to go to the church every Sunday," she said referring to the Prague church where World War Two resistance fighters hid after assassinating Nazi police chief Reinhard Heydrich.

"I pray that this horror in Ukraine ends soon and we can return home."

At Berlin's Nathanael Church, Ukrainian community leaders said the congregation of around 500 would swell to an expected 2,500 people for the celebrations where refugees said the singing and traditions reminded them of home. More than 369,000 Ukrainians have registered in Germany after fleeing the war.

Inside the church, attendees crossed themselves while singing hymns as others silently took turns lighting candles. Outside, a long line of children stood on the grass with Easter egg baskets in front of them as a priest walked by sprinkling them with water.

"Everything today is like in Ukraine with so many people and this atmosphere," said Diana Shyndak,23, originally from Kyiv. "It's good to see so many people here that can celebrate Easter."

"It’s my first Easter celebration not in Ukraine. It’s sad and my heart hurts because so many people have died. We pray everyday for our people and our children.”