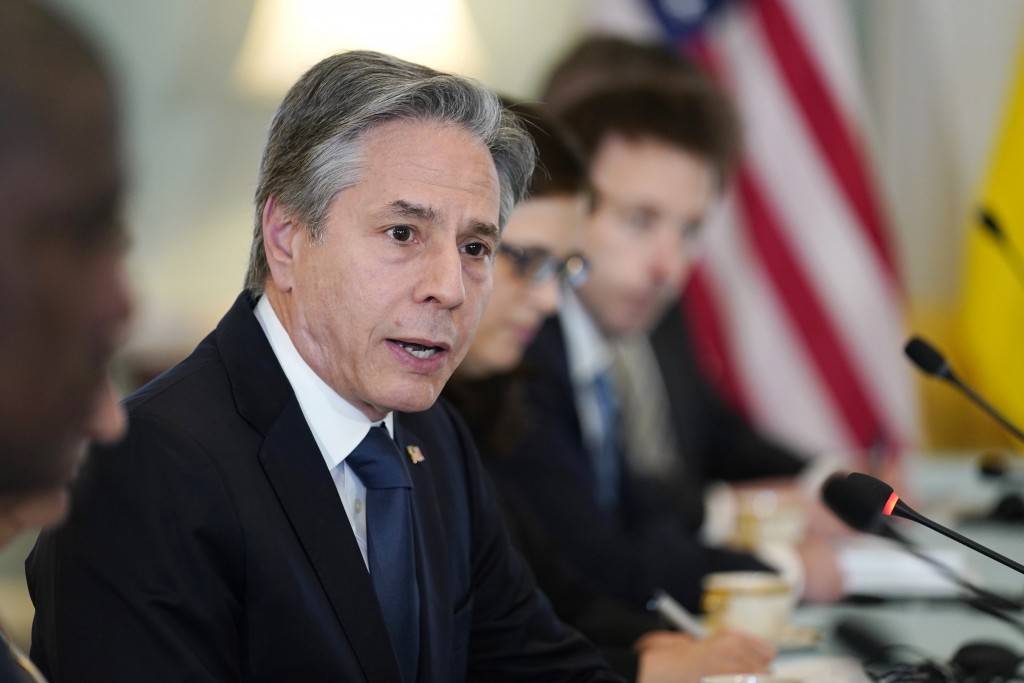 U.S. Secretary of State Antony Blinken and Defence Secretary Lloyd Austin were to visit Kyiv on Sunday to discuss Ukraine's request for more powerful weapons after months of combat with invading Russian forces.

The visit, announced by Ukrainian President Volodymyr Zelenskiy on Saturday, would be the highest-level visit by U.S. officials to the country since the start of the war on Feb. 24.

The White House has not confirmed any travel plans for Blinken and Austin. The State Department and Pentagon declined comment.

As the war enters its third month, there is no end in sight to the fighting that has shocked the world, killed thousands, uprooted millions and reduced cities to rubble.

"Tomorrow we will discuss this exact list of weapons that are essential for us and the pace of deliveries," Zelenskiy told a dramatic Saturday evening news conference in an underground metro station.

"We would like to have... powerful heavy weapons. As soon as we have (more weapons), as soon as there are enough of them, believe me, we will immediately retake this or that territory, which is temporarily occupied."

Zelenskiy's comments came as Russia resumed its assault on defenders making a last stand in a giant steel works in Mariupol, days after Moscow declared victory in the key southern port city and said its forces did not need to take the plant.

The attack on Mariupol, the biggest battle of the conflict, has raged for weeks. Capturing the city is seen as vital to Russia's attempts to link the eastern Donbas region with Crimea, the Black Sea peninsula Moscow seized in 2014.

Moscow-backed separatists have for years held territory in the Donbas region, which contains the areas of Donetsk, including Mariupol, and Luhansk.

"Usually we would come to our churches with Easter baskets. But now this is impossible," Gaidai posted on his Telegram channel. "Seven churches in Luhansk region have been mutilated by Russian artillery."

Reuters could not independently verify the report of the destroyed churches.

Ukraine estimates tens of thousands of civilians have been killed in Mariupol and says 100,000 civilians are still there. The United Nations and Red Cross say the civilian toll is at least in the thousands.

A new attempt to evacuate civilians failed on Saturday, an aide to Mariupol's mayor said.

Oleksiy Arestovych, a political adviser to Zelenskiy, said Ukrainian troops in the steel complex were holding out and attempting counterattacks. More than 1,000 civilians are also in the plant, according to Ukrainian authorities.

Ukraine's military said on Sunday that Russian forces were continuing their offensive in the east of the country to establish full control over Donetsk and Luhansk, adding they were attacking both military and civilian infrastructure.

It said Russian forces were also partially blockading the northeastern city of Kharkiv, and had moved Iskander-M missile launchers some 60 km (40 miles) from the Ukrainian border. The Iskander-M system fires short-range ballistic missiles that can hit targets up to 500 km away.

In Donetsk and Luhansk, Ukrainian forces said they repulsed 12 attacks on Saturday, destroying four tanks, fifteen units of armoured equipment and five artillery systems, among others. Reuters could not independently confirm the reports.

Despite some territorial gains by Russia, Ukrainian resistance has been strong, especially in Donbas, British military intelligence said on Sunday.

"Poor Russian morale and limited time to reconstitute, re-equip and reorganise forces from prior offensives are likely hindering Russian combat effectiveness," it said in a regular bulletin.

Zelenskiy said Russia had already fired most of its missile arsenal at Ukraine.

"But what they have already done is a powerful enough argument for the world to finally recognise Russia as a state sponsor of terrorism and the Russian army as a terrorist organisation."

Russia has denied targeting civilians in its "special military operation".

The Russian defence ministry said it used high-precision missiles to destroy a logistics terminal in Odesa containing weapons supplied by the United States and European nations. The last big strike on or near Odesa was in early April.

Russian General Rustam Minnekayev said on Friday Moscow wanted control of the whole of southern Ukraine, comments Ukraine said indicated Russia had wider goals than its declared aim of demilitarising and "denazifying" the country. Kyiv and the West call the invasion an unjustified war of aggression.

The Azov battalion, a militia prominent in the defence of Mariupol, released a video it said showed women and children sheltering in the steel complex. Reuters could not independently verify where or when the video was shot.

One woman holding a young child said food was running out, while a boy said he was desperate to get out after two months in the bunker.

"I want to see the sun because in here it's dim, not like outside. When our houses are rebuilt we can live in peace. Let Ukraine win because Ukraine is our native home," he said.