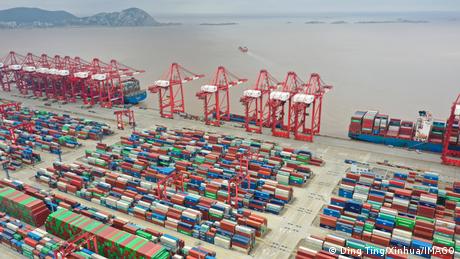 Europe and the United States can expect further delays and shortages of electronics imports from China as a result of a COVID lockdown in the commercial hub of Shanghai, an economist with the Kiel Institute for the World Economy (IfW-Kiel) has warned.

Vincent Stamer, a world trade expert, told DW that exports from the world's largest container port in Shanghai have fallen by nearly a third.

"Three weeks after the lockdown started, approximately 30% of goods that should be leaving Shanghai at this moment are not," he explained. "In other words, that's 30% fewer exports to the rest of the world."

Exports from Shanghai in limbo

Stamer tweeted a graphic showing that departing cargo volumes from Shanghai had fallen sharply, while volume from other Chinese ports remained steady. Other port data show average daily volumes of 140,000 containers have sunk to 100,000 per day.

Shanghai is ground zero of the largest COVID-19 wave in China since the pandemic began more than two years ago. With a population of 26 million, the port city has been in a strict lockdown since March 28 that has seen some workers forced to sleep at their factories.

Factories in the region around Shanghai specialize in the export of consumer goods, such as tablets and televisions as well as more sophisticated and intermediate electronic goods used for manufacturing in the West.

"It seems that manufacturing has slowed down in the Shanghai region and the goods have not reached the port to be loaded onto container ships," Stamer said.

The shipping delays have increased despite reassurances from Chinese officials that port operations would be minimally impacted by the curbs.

Images posted to social media from sources like Marine Traffic have shown the extent of the delays, with scores of ships anchored in waters off Shanghai, with no cargo to load.

Stamer said the delays would be felt in Europe in around two months as it takes between 5 to 6 weeks for container ships to travel from Shanghai to the northern German port of Hamburg, and a further two weeks for the goods to be offloaded and delivered.

Stamer predicted that consumer goods would become more expensive this summer as a result, adding that Germany could be among those worst affected by the delays as nearly a third of the sea trade between China and Europe's largest economy is sent via the port of Shanghai. Between 5-8% of trade between the two nations is currently delayed, he said.

German economic representative in China Maximilian Butek backed up the prediction, telling DPA news agency on Friday that alternative delivery routes via other ports were not sufficient to cushion the loss.

Butek agreed that the port of Shanghai itself was not the biggest area of concern as the real delays were caused by transporting the goods from factories to the port.

The fresh delays are certain to exacerbate a supply chain crisis that has grown since the height of the first COVID lockdowns around the world in spring 2020.

The pandemic initially forced the closure of large parts of the global economy, which forced freight companies to cancel shipping schedules. That, in turn, left scores of container ships anchored off the coast of Western and Chinese ports, often in the wrong location.

As a result, more than three-quarters of the world’s ports have experienced abnormally long turnaround times over the past two years, according to Bloomberg.

Last year, the closure of two other Chinese ports, Ningbo-Zhoushan and Yantian, also worsened the shortages of retail and manufacturing goods to the rest of the world.

Describing the global picture, Stamer told DW that approximately 12% of all goods moving around the world by container are currently stuck on ships that are not moving. The usual rate is less than 6%, while the highest-ever rate recorded was 14% in late summer 2021.

Officials in Shanghai vowed Friday to relax anti-virus controls on truck drivers that are hampering their deliveries. The Associated Press cited deputy mayor Zhang Wei as saying the region was making "every effort" to resolve the crisis.

Truck drivers who bring goods to Shanghai have faced multiple checkpoints and virus tests that forced some shipping companies and drivers to avoid the region altogether.

The lockdown is now slowly being eased and a new simpler testing regime will smooth the passage for drivers reaching the port, said Wu Chungeng, the director of the Highway Bureau of the Ministry of Transportation.

"My intuition is that the delays might get a little worse before they get better," Stamer warned, however. He predicted that global supply chains "won't get back to normal this calendar year," because the port and shipping bottlenecks are complicated to resolve.

"In the next 12 months, we should see some easing, but only if other lockdowns in China can be avoided," Stamer added.

China's leadership has pursued a strict Zero-Covid strategy featuring curfews, mass testing and quarantine requirements since the virus emerged in Wuhan in late 2019.

This approach is being put to a severe test by the arrival of the omicron BA.2 subvariant of the virus and because China's vaccines are not as effective as those produced in the US and Europe.