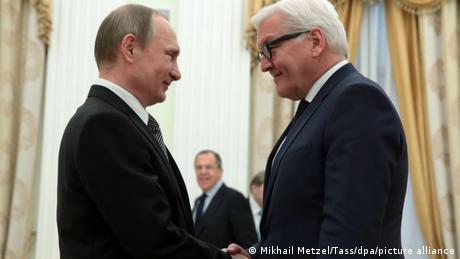 They met and they talked. That is all we know about this week's discussions between Social Democratic Party (SPD) co-leader Saskia Esken and Ukrainian Ambassador Andrij Melnyk. The agreed silence could be considered a success for the SPD, as Melnyk is not well disposed to the party, as he has often and happily made clear in recent weeks.

The ambassador blames the SPD, the party of German Chancellor Olaf Scholz, for Berlin's failure to deliver heavy weapons to Ukraine and impose an immediate embargo on gas and oil deliveries from Russia. Melnyk also claims that leading SPD politicians had a "highly questionable closeness to Russia" in recent years and decades.

Melnyk has his sights particularly set on German President Frank-Walter Steinmeier, who was once among former Chancellor Gerhard Schröder's closest confidants and his chief-of-staff, and subsequently served twice as foreign minister under Angela Merkel. As such, he established a "spider web of contacts with Russia," Melnyk told Berlin's Tagesspiegel newspaper in early April. Many of the people who call the shots in the current German government are also involved in this web.

On Twitter, Melnyk recently added — in response to an op-ed defending Steinmeier by another former SPD foreign minister, Sigmar Gabriel — that the "Putin-friendly" policies of the "SPD cronies" had "brought about the barbaric war of extermination against the state, nation, culture, women and children in the first place."

By SPD cronies the Ukrainian ambassador means above all Steinmeier, Schröder, and Gabriel. It is true that other Social Democrats maintained a good relationship with Russia, including the current SPD parliamentary group leader Rolf Mützenich, who always insisted that Germany should have as good a relationship with Russia as with the United States. There was also Manuela Schwesig, state premier of Mecklenburg-Western Pomerania, who did everything she could until the very end to save the Russian-German gas pipeline Nord Stream 2.

But Schröder, Steinmeier and Gabriel are the three big names associated with the SPD's decades-long pro-Russian policy. The three men are now dealing with their past in very different ways.

President Steinmeier has now admitted to making mistakes. For almost 15 years, he had pursued the idea of a close cooperation with the Kremlin centered on energy. "Change through trade" or even "change through interdependence" was the name of the strategy, which aimed at a partnership with Russia that would modernize its authoritarianism. No matter what Putin ordered, whether it was the 2008 war in Georgia, the suppression of the opposition in Russia or the annexation of Crimea in 2014, Steinmeier was always among those opposed harsher rules or even imposing sanctions.

As recently as 2016, two years after the annexation of Crimea, Steinmeier scolded NATO's "loud saber-rattling and war cries" on the alliance's "eastern border," when 10,000 NATO troops held maneuvers in Poland and the Baltics to practice defensive maneuvers. Today, the German president speaks of having "failed": "We held on to bridges that Russia no longer believed in and that our partners warned us against," he admitted in early April.

It's a view that former Chancellor Schröder is far removed from. Schröder is linked to Putin by a friendship that has lasted more than twenty years and goes far beyond a political relationship. Putin may even have arranged for Schröder and his then-wife Doris Schröder-Köpf to adopt two Russian children, something that they would not have been able to do normally according to adoption laws.

In 2005, just a few weeks after being voted out of office, Schröder moved into the Russian energy industry as a lobbyist. He is chairman of the supervisory board of the Russian oil giant Rosneft and is also on the payroll of the Russian pipeline operator Nord Stream. He still refuses to give up these posts, though leading comrades in the SPD have repeatedly urged him to do so.

"You don't do business with an aggressor, with a warmonger like Putin," SPD co-leader Lars Klingbeil said pointedly on social media in March. "As a retired chancellor, you never act completely privately. Especially not in a situation like the current one."

But Schröder turned a deaf ear, instead flying without consulting the German government and the SPD leadership first to Istanbul, where negotiators from Russia and Ukraine had met for negotiations, and then to Moscow to talk to Putin.

The talks yielded neither known results nor consequences, and it subsequently became quiet again around the former chancellor and the ultimatum that his party had issued. While there was public talk of regulatory proceedings and party expulsion, the SPD leadership has not carried out any of its threats.

What role does Sigmar Gabriel play?

Schröder recently had a visit from his old party comrade Sigmar Gabriel at his private home in Hannover, a meeting that only became known because journalists from the Bild had observed it. After an hour and a half of conversation, the mass-circulation tabloid quoted Gabriel as saying: "I wanted to ask Gerhard Schröder what came out of his talks in Istanbul and Moscow on the peace negotiations between Ukraine and Russia. But unfortunately, despite a variety of international efforts, there seems to be no quick end in sight to this terrible war of aggression."

But was that really all Gabriel wanted to discuss with Schröder? The former German foreign minister is working through his past in a different way to Steinmeier and Schröder. The day before the Russian invasion of Ukraine, Gabriel had claimed that Putin was "not concerned with gaining land." In the meantime, the 62-year-old, who has since joined the German business community after his political career, admits, "It was a mistake not to listen to the Eastern Europeans when they objected to Nord Stream 2. That was my mistake, too."

But for all his new insight, Gabriel is also concerned with saving his reputation and that of his comrades. In a op-ed for newsmagazine Der Spiegel over the Easter weekend, Gabriel took President Steinmeier to task for attacking Ukrainian Ambassador Melnyk. "Spider webs, as we all know, serve to catch and then exploit the prey," Gabriel wrote. "To the point, this comparison insinuates that the former chancellor's office and foreign minister helped organize the representation of Russia's interests in Germany. This is untruthful and malicious."

Melnyk refused to let this stand. "Malicious has been above all your and your SPD cronies' years of Putin-friendly policies." In response, Gabriel wrote: "People like me have negotiated with Putin not as "friends of Russia," but about maintaining the trans-Ukrainian pipeline that brings Russian gas to and through your country to TODAY."

For the current SPD leadership, such public disputes are a political nightmare. Party leaders Lars Klingbeil and Saskia Esken have no interest in the reappraisal of Social Democratic policy on Russia degenerating into open dispute. In any case, it is hard enough for them to convince the SPD to support the "turnaround" propagated by Chancellor Olaf Scholz.

Opposition to arms deliveries to war zones is deeply rooted in the SPD. It is not easy to convince everyone that almost everything that was once considered right is now wrong.

The SPD leadership must now find a way to deal with the mistakes of the past without the party breaking up over them. Much is at stake, including the political legacy of an entire generation of SPD politicians.